MobileNet is one of the many deep convolution models available to us. In this article, we have dived deep into what is MobileNet, what makes it special amongst other convolution neural network architectures, Single-Shot multibox Detection (SSD) how MobileNet V1 SSD came into being and its architecture.

MobileNet V1 is an adaptation of the MobileNet model.

The above image depicts the depth wise separable convolution. In mobileNet V1, the convolution box in the given image that consists of depthwise and point wise convolutions is repeated 13 times after the initial convolution layer .The table below gives its detailed architecture.

In the above table, in convolution layer mentioned as Conv, the fourth parameter in the column 'Filter shape' represents the number of filters for the respective conolution layer.

Single shot Multibox detector is an algorithm which takes only one shot to detect many objects in the image using multibox. It uses a single deep neural network to achieve this. This detector works at a variety of different scales, so it is able to detect objects of various different sizes/scales in the image.Given below is the architecture of SSD: 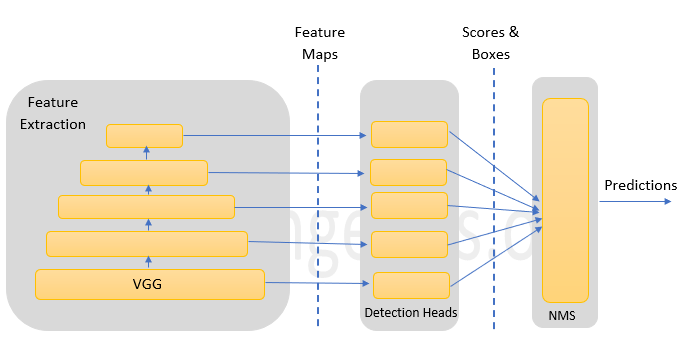 Generally, SSD uses an auxillary network for feature extraction. This is also called as base network. In the above image, the algorithm uses VGG to extract feature maps. But the last few layers of VGG like the maxpool, FC and Softmax are omitted and the output of VGG is used as feature maps on which to base detections.

More convolution layers are added in which the intermediate tensors are kept, so that a stack of feature maps with variety of sizes are generated to make detection. Let us assume, that we have a feature layer of size a x b and we have c channels. Then the convolution (mostly 3 x 3) is applied on a x b x c feature layer. So for each location of the objects identified, there are k bounding boxes possible each with a probability score assigned to it.

At last, Non-max supression is used to make sure that there's only one bounded box around an object. Its achieved as folows:

Firstly, all the bounding boxes around the objects that has probability less than a certain threshold (say 0.6). Then of the remaining boxes, the box with the greatest probability factor is looked upon for each and every object and the other boxes except the one with maximum probability factor is supressed. Thus leaving only a single bounded box around a single identified object.

Since in this, all the boxes with non-maximum values are supressed, the method is called Non-maxima Supression.

There are some practical limitations while deploying and running complex and high power consuming neural networks in real-time applications on cut-rate technology. Since, SSD is independent of its base network, MobileNet was used as the base network of SSD to tackle this problem.

This is known as MobileNet SSD.

When MobileNet V1 is used along with SSD, the last few layers such as the FC, Maxpool and Softmax are omitted. So, the outputs from the final convolution layer in the MobileNet is used, along with convolutiong it a few more times to obtain a stack of feature maps.These are then used as inputs for its detection heads. Its architecture can be modified as per required.The table below gives one of its architecture in detail.

Given below is a pictorial representation of MobileNet V1 based SSD architecture pattern.

By the end of this article at OpenGenus, you will have a clear idea on SSD MobileNet architecture.

In this article, we will learn about the Lempel Ziv Welch compression and decompression algorithm, a famous compression technique that is widely used in Unix systems and GIF format files

We have explained the Lomuto partition scheme, which is used in the famous Quicksort algorithm. It is an algorithm to partition an array into two parts based on a given condition.