In this article, we have explored three different algorithmic techniques to find starting point of loop in linked list.

You may know that every Node in a Linked List has two fields, one to store a value and one to point to another node, and this continues until a Node points to the Null Value.

Instead of pointing to the Null Value, the ending Node of the Linked List can point to the other ( one of the previous ) Node, and this may cause it to create a cycle in the Linked List.

Cycle in a Linked List could be considered as a problem ( Bug ) or a feature, as per your use case, and this article covers some algorithms that you can use to detect and find the Node where the cycle/loop occurs/starts in the Linked List.

A Linked List with a cycle may look like this, and we will be considering this linked-list through out this article. 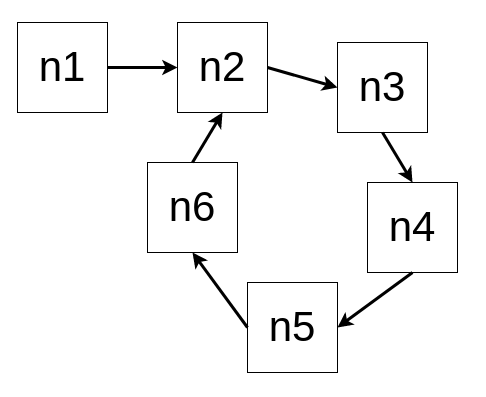 First let's write a code for the above LinkedList with the cycle in it.

Note: Consider this code to be common for all upcoming once.

We can use two kinds of methods,

One method for tracking is to store the Nodes that we have visited already in a HashSet So we can look up a node with O(1) time.

In this, first, we will define an empty set() and then start a loop, which will run until we come to a Node which we have already added in the set() while looping.

The linked list has N number of nodes, and this algorithm looks at every node, therefore,

And since, while parsing through the linked list, this algorithm stores all those N nodes in a HashSet.
therefore,

Another way to keep track of the Nodes that we visited is to mark every Node, for this we're using a variable visited in our code and every Node is a object with this variable.

Now, you may notice that this method does have one issue, that is, that once we set visited as True it will remain True, running the function again will return n1 instead of n2.

We can fix this by reseting variable visited for every Node.

Again now there are N number of Nodes and the Algorithm visits every node in the Linked List,
therefore,

And since, every needs an extra variable to be marked, so, we need N number of extra space,
therefore,

The first step in this algorithm is to check if there is a cycle or not.

Note: Jumps of these pointers don't need to be 1 and 2 steps.
It can be any number of steps, the only thing to consider here is that both pointers should take different number of steps.

The Node tortoise_and_hare is returning, is the Node which will have the same distance from the starting point of the cycle, like the head of the Linked List.

And now we can move both pointers by 1 step, until they point to the same Node, which is going to be the starting node of the cycle.

Now there are two pointers, one is moving forward by 1 step and another is moving forward by 2 steps and if this algorithm finds a cycle then they meet at a Node and this happens in O(N) time and then start_of_cycle3 iterates till the start of the cycle, which is about O(N),
therefore,

And since, we're not creating any kind of extra memory,
therefore,

With this article at OpenGenus, you must have the complete idea of Finding starting point of loop in linked list.

In this article we discuss piping and redirection whereby we can alter the flow of input or output streams. This technique enables a user to create custom commands by combining multiple smaller commands.

In this article, we have covered how to compile a C program using the GCC compiler along with the different stages such as Preprocessing, compiling, assembling and linking.