In this article we discuss piping and redirection whereby we can alter the flow of input or output streams. This technique enables a user to create custom commands by combining multiple smaller commands to achieve specific task that cannot be accomplished by a single Linux command.

Streams are inputs to and outputs from a program in Linux, we can redirect these streams.

There are 3 standard streams namely, 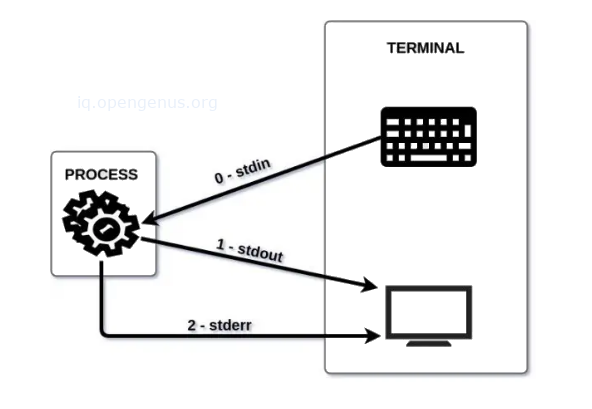 Files associated with a process will have unique numbers for identification known as file descriptors. These number are useful whenever an action is required to be performed on a file.

Streams also have their descriptors, that is, 0, 1, 2 for stdin, stdout and stderr respectively.

In this article we shall be using Linux commands discussed in a previous articles, the links are in the references section.

The command first creates a new directory TestDir, the changes from the current directory to TestDir using the cd command, then echos text into the files and finally concatenates all files to print output to the terminal.

Redirection involves reading files and passing their contents as input to commands and sending output from commands to files.

>: This redirects output from a command to a file, one must have write permissions. If the file has other content, it is usually lost, otherwise if the file doesn't exist a new file is created.

To get all lines with the text police officer and redirect output to another file, out we write,

>>: This also redirects output from a command to a file, write permissions are also necessary. If the file has other content, the redirected content is appended, otherwise if the file doesn't exist a new file is created.

To append lines with the word fire fighter to the out file we write,

Now the previous contents of out are not erased,the new content is appended.

Redirecting input
<: This is useful for redirecting a file into an application, in that, file contents we act as the standard input for the application/command.

Another example
For example to replace all commas with '|', we can write.

From the above command, the sed command receives input from out file.

A here-document redirects input into an interactive shell of program.
The form of the here document is as follows.

Now when you concatenate error.txt the error that was to be displayed on the terminal will have been redirected there.
Notice how we use the descriptor number 2.

We can also combine streams by redirecting from one to another, e.g to combine stderr and stdout we ca write,

Piping involves passing output from one command as input to another.

From the above command we concatenate contents of text1.txt, the output of this command is then piped to the wc command.

We can also combine multiple pipes as follows,

From the above command we get the professions column from text1.txt file using the sed command then pipe the output to the trcommand which converts the output(now its input) to uppercase letters then pipes the output we obtain to the tac command as input which reverses the words and finally the sort command sorts the input received and the result is printed.

We can also combine the command with redirection i.e redirecting the output or error to a file.

Piping and redirection is very useful, a case on point is stress testing programs, whereby we have two algorithms and need to test them on varying inputs. To do this in a simple automated manner we can create an input file with randomized inputs then pass its contents as parameters to both algorithms.

Partitioning a disk is the first step before installing a file system since creation of any files or directories is done in a file system. In this article we discuss partitioning and demonstrate how to partition a drive using parted utility.

In this article, we have explored three different algorithmic techniques to find starting point of loop in linked list.