This article talks about the Gitlab system design with a simplified overview of its architecture as well as explanation on the working of the important Gitlab architecture components. The System Design of GitHub will be on similar lines.

The simplified gitlab architecture below, can be used to understand the working of Gitlab. 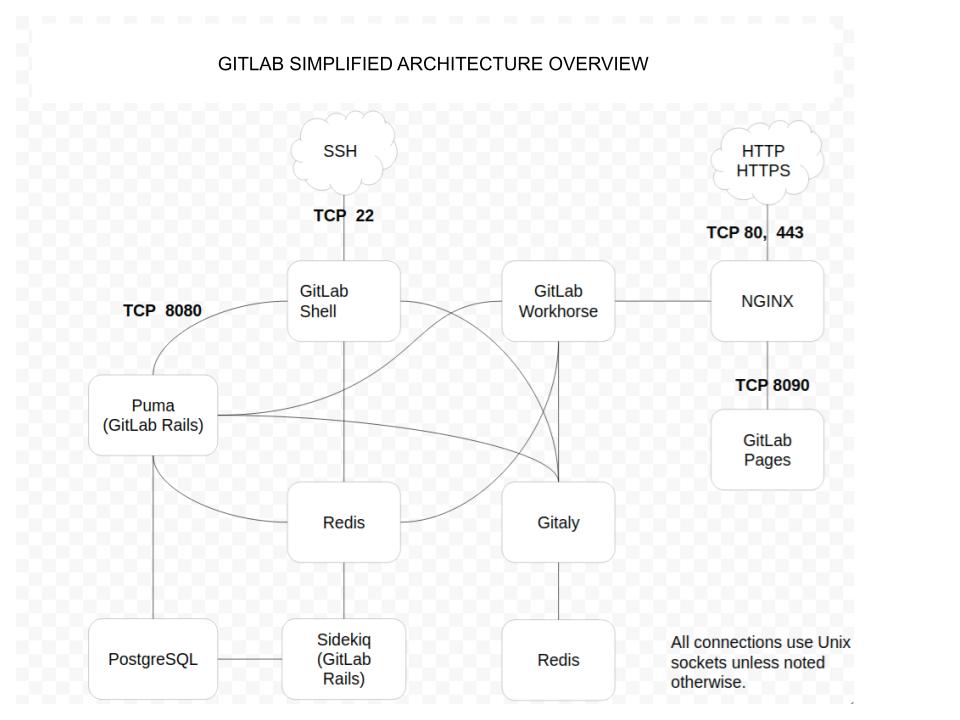 Gitlab is typically install on GNU/Linux however, the largest known Gitlab instance in on Gitlab.com. Now, let's talk about the gitlab architecture in detail.

The Gitlab architecture is made up of the following components:

We will dive into each component deeper now.

Gitlab uses NGINX as a web server to proxy through GitLab Workhorse and into the Puma application server.

NGINX has an Ingress port for all HTTP requests and routes them to the appropriate sub-systems within GitLab.

Gitlab uses NGINX because it can handle a high volume of connections.

NGINX is commonly used as a reverse proxy and load balancer to manage incoming traffic and distribute it to slower upstream servers – anything from legacy database servers to microservices. NGINX is also one of the fastest web servers.

The preference for Puma might possibly be because unlike other Ruby Webserver, Puma was built for speed and parallelism. It also provides a very fast and concurrent HTTP 1.1 server for Ruby web applications.

Some of the most popular alternatives and competitors to Puma are Atlas, Panther, NGINX, Apache HTTP Server, and Microsoft IIS.

Gitlab uses Sidekiq as a job queue which, in turn, uses Redis as a non-persistent database backend for job information, metadata, and incoming jobs. Sidekiq is a Ruby background job processor that pulls jobs from the Redis queue and processes them.

Sidekiq is usually preferred for rails applications due to it simplicity and efficiency in background processing to handle many jobs simultaneously in the same process using threads.

A popular alternative to Sidekiq is kafka.

Usually, the communication between Puma and Workhorse is done through a Unix domain socket, however, it can also be done by forwarding requests via TCP. Workhorse accesses the gitlab/public directory, bypassing the Puma application server to serve static pages, uploads and pre-compiled assets.

The GitLab application uses PostgreSQL for persistent database information such as users, permissions and issues. GitLab stores the bare Git repositories in the location defined in the configuration file, repositories: section. It also keeps default branch and hook information with the bare repository.

Why should anyone use POSTGRESQL?

Postgres allows you to store large and sophisticated data safely. It helps developers to build the most complex applications, run administrative tasks and create integral environments.

When serving repositories over HTTP/HTTPS GitLab uses the GitLab API to resolve authorization and access and to serve Git objects.

Git operations over HTTP use the stateless “smart” protocol described in the Git documentation, but responsibility for handling these operations is split across several GitLab components. 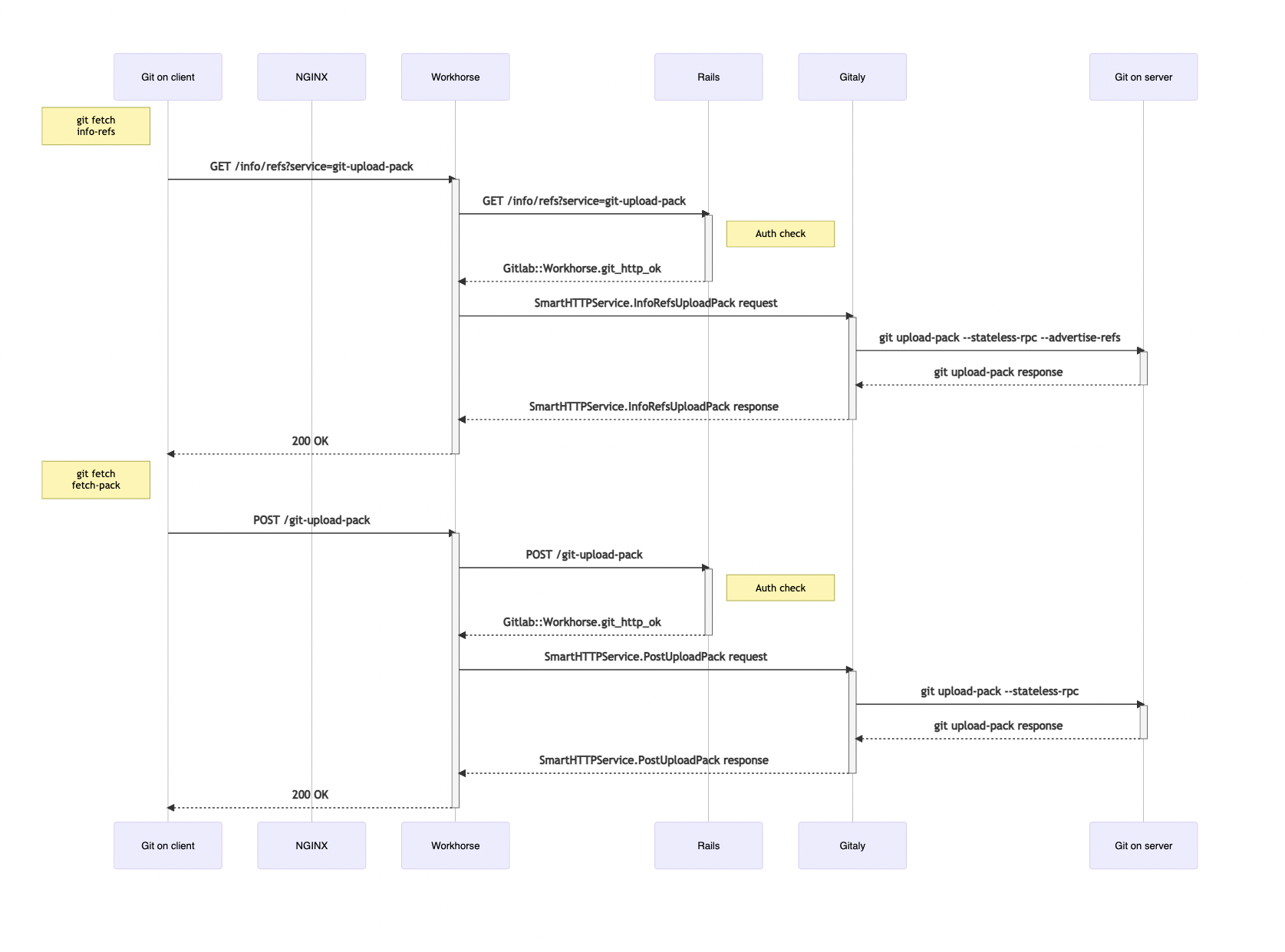 The add-on component GitLab Shell serves repositories over SSH. It manages the SSH keys within the location defined in the configuration file, GitLab Shell section. The file in that location should never be manually edited.

GitLab Shell accesses the bare repositories through Gitaly to serve Git objects, and communicates with Redis to submit jobs to Sidekiq for GitLab to process. GitLab Shell queries the GitLab API to determine authorization and access. 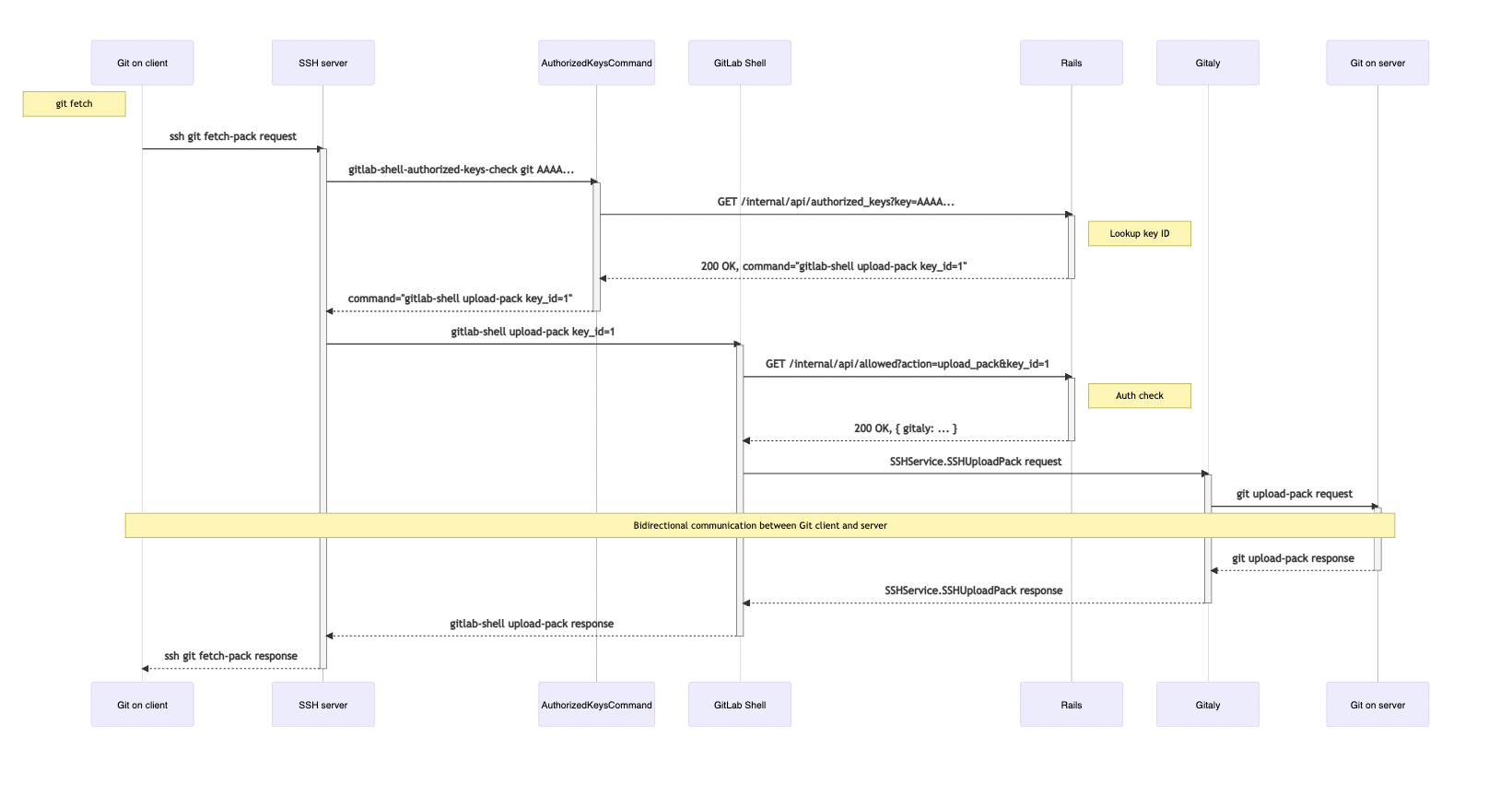 Gitaly provides high-level RPC access to Git repositories. It is used by GitLab to read and write Git data.

Gitlab uses Redis purposely for Caching, as a job processing queue with Sidekiq, to manage the shared application state, and as a pub/sub queue for ActionaCable.

With this article at OpenGenus, you must have the complete idea of System Design of GitLab.