In this article, we have discussed the paper titled "Time bounds for selection" submitted by Manuel Blum, Robert W. Floyd, Vaughan Pratt, Ronal L. Rivest, AND Robert E. Tarjan. This paper proposed a new algorithm called PICK for the problem that is stated as "Given an array of n integers, we have to pick the ith smallest number". The algorithm demonstrates to solve in no more than 5.4305 * n comparisons.

The problem can be traced back to the world of sports and the design of tournament to select first and second best player.The first best player will obviously be the one who won the entire game, however the previous method was denounced where the player who loses the final match was the second best player. Around 1930, this problem came into the realm of algorithmic complexity. It was shown that no more than n + [log(n)]- 2 matches are required, this method conducted a second match for the log(n) (at most) players other than the winner to determine the second best player.

There are a certain notations that we need to understand here.

See the below figure for better understanding.

The minimum worst-case cost, that is, the number of binary comparisons required, to select ith of S will be denoted by f(i, n), |S|=n, and a new notation is introduced to measure the relative difficulty of computing percentile levels.

Pick operates by successively removing subsets of S whose elements are known to be too small or too large to the iΘS, until only ith of S remains. Each subset removed with contain at least one quarter of the remaining elements. PICK will be described in terms of three auxiliary functions b(i,n), c(i,n), d(i,n). In order to avoid confusion we will omit argument lists for these functions.

Pseudo code for above algorithm would look like
PICK(a[], n, i)

The functions b(), c() and d() decide the time complexity, we need to choose them wisely as an additional sorting is also done.
Let h(c) denote cost of sorting c elements using Ford and Johnson's algorithm. Also known as the merge-insertion sort algorithm is a comparison sorting algorithm that involves fewer comparisons in the worst case as compared to insertion and merge sorts. The algorithm involves three steps, let n be the size of array to be sorted.

And the cost of sorting elements is given below

Now the cost of 1a previously described is n.h(c)/c. Hence, it's only wise to make c a constant in order for the algorithm to run in linear time.
Let P(n) be the maximum cost for PICK for any i. We can bound the cost of 1b by P(n/c). After 1b a partial order is formed which can be seen in the below figure. 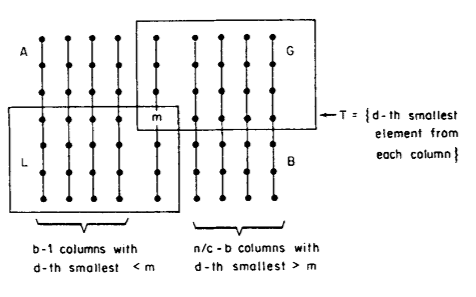 Since the recursive call to PICK in step l(b) determines which elements of T are <m, and which are >m, we separate the columns, where every element of box G is clearly greater than m, while every element in box L is less. Therefore, only those elements in quadrants A and B need to be compared to m in step 2.

We can easily show that no elements are removed incorrectly in step 3. if rank of m > i, we can say that m is too large and remove all elements greater than m and vice versa. Also, note that at the least all of L or G is removed.
Therefore

Two modifications to PICK are described,

PICK1 differs by PICK in

The procedure of PICK1 is relatively lengthy. The optimized algorithm is full of red tape, in principle, for any particular n could be expanded into a decision tree without red-tape computation.

By analysis of PICK2, which is essentially the same as PICK with the functions b(i, n), c(i, n), and d(i, n) chosen to be i, 2, and 1, respectively, and with the partitioning step eliminated.

The main result i.e time complexity of PICK , f(i,n) = O(n). However, this has been tuned up to provide tighter results. If you recall the definition of F(α) to measure relative difficulty of computing percentile levels. After the changes made to PICK, we get three expressions here

There is no evidence to suggest that any of the inequalities (1) - (3) is the best possible. In fact, the authors surmise that they can be improved considerably.

The most important result of this paper is that selection can be performed in linear time, in the worst case. No more than 5.4305n comparisons are required to select the ith smallest of n numbers, for any i, 1<= i <= n. This bound can be improved when i is near the ends of its range, i.e when i get larger.

With this article at OpenGenus, you must have a strong sense of time complexity analysis of algorithmic problems and understand how selecting any element at a specific order takes only linear time.

Backdoor is a exploit in web application that makes it vulnerable and allows unauthorized access. In this article, we will explore how Backdoor is implemented in a Node.JS application using child_process library.

Sobel Filter/ Operator is a filter used in Convolution that is used to detect edges in an image. This is one of the fundamental approaches in Image Processing/ Machine Learning to detect edges.