Let us get started with boosting.

Maybe almost all of you reading this is familiar with Machine Learning Algorithms such as K Neighbor Classifier or Regressor, Linear Regression, Ridge, etc. But, What if your model is not robust enough as you might say. One of the solutions of that questions is Boosting, an Ensemble Algorithm.

In general, people working in groups are more likely to perform better than individuals working alone. When task are assigned to a group, that particular group could approach the task with different kinds of perspective. The same rule also applies to Machine Learning models. We could group different individual weak learners to achieve a robust, and highly accurate model.

There are two types of Ensemble Methods, averaging, and boosting. On this particular article, we'll focus on Boosting.

Boosting means combining several weak learners in series. Boosting method mainly focus on training that previous model have gotten wrong. The key property of boosting ensembles is the idea of correcting prediction errors. The models are fit and added to the ensemble sequentially such that the second model attempts to correct the predictions of the first model, the third corrects the second model, and so on.

AdaBoost stands for Adaptive Boosting, a boosting method used as an Ensemble Method. Adaboost starts by predicting on the original dataset as simple as possible, and then it gives equal weights to each observation. If the prediction made using the first learner is incorrect, it allocates the higher importance to the incorrectly predicted statement and an iterative process. It goes on to add new learners until the limit is reached in the model. 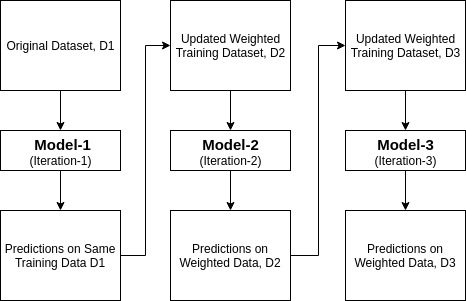 One of the most commonly used as a base estimator or weak learner for AdaBoost is Decision Stump.

Decision Stump is a Decision Tree Machine Learning model, but only consists of one internal node, which is immediately connected to the leaves. A decision stump makes a prediction based on the value of just a single input feature.

Gradient boosting approaches the problem a bit differently. Instead of adjusting weights of data points, Gradient boosting focuses on the difference between the prediction and the ground truth. Gradient Boosting trains many models in a gradual, additive and sequential manner. While the AdaBoost model identifies the shortcomings by using high weight data points, gradient boosting achieves the same effect by using gradients in the loss function. 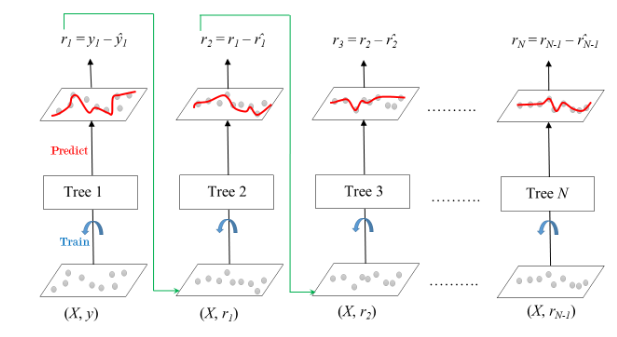 XGBoost is one of the variants of gradient boosting that commonly used. It is a ensemble Machine Learning with decision tree as it's weak learner. XGBoost is designed to enhance the performance and speed of a Machine Learning model. XGBoost uses pre-sorted algorithm and histogram-based algorithm for computing the best split. The histogram-based algorithm splits all the data points for a feature into discrete bins and uses these bins to find the split value of the histogram. Also, in XGBoost, the trees can have a varying number of terminal nodes and left weights of the trees that are calculated with less evidence is shrunk more heavily.

There's some constraints that can be applied on the construction of the decision trees, such as Number of trees, tree depth, Number of nodes, minimum imrpovement to loss.

The contribution of each tree to this sum can be weighted to slow down the learning by the algorithm. This weighting is called a shrinkage or a learning rate. The effect is that learning is slowed down, in turn require more trees to be added to the model, in turn taking longer to train, providing a configuration trade-off between the number of trees and learning rate.

Boosting is an ensemble method that combines weak learners into a strong one. It could outperform shallow Machine Learning models like Logistic Regression. Boosting is also suitable for artificial intelligence projects across range of industries including Healthcare, IT, and Finance.

With this article at OpenGenus, you must have the complete idea of Boosting. Enjoy.

We have explained how to compute Multiplication using Bitwise Operations. We can solve this using left shift, right shift and negation bitwise operations.