Java has a great and powerful mechanism to handle the exceptions so that normal flow of the application can be maintained. We explore the various types of exceptions, how it is handled by JVM and how it can be handled by users in a custom procedure.

An exception (or exceptional event) is a problem that arises during the execution of a program. When an Exception occurs the normal flow of the program is disrupted and the program/Application terminates abnormally, which is not recommended, therefore, these exceptions are to be handled. 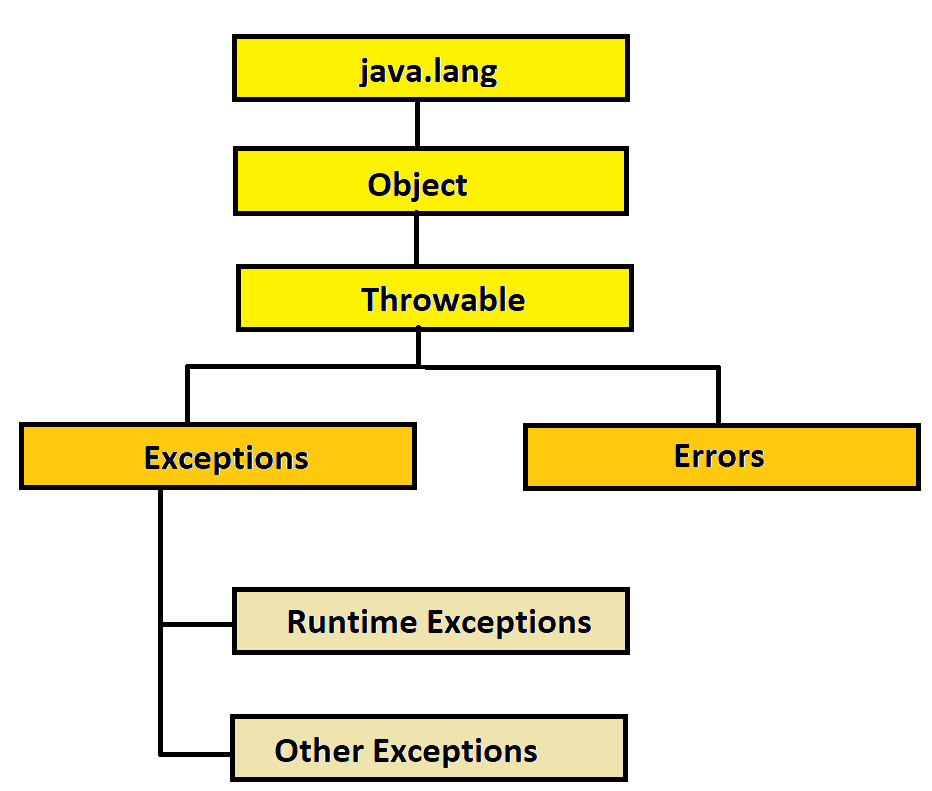 All exception and errors types are sub classes of class Throwable, which is base class of hierarchy.One branch is headed by Exception. This class is used for exceptional conditions that user programs should catch. NullPointerException is an example of such an exception.Another branch,Error are used by the Java run-time system(JVM) to indicate errors having to do with the run-time environment itself(JRE). StackOverflowError is an example of such an error.

a. Exception class is for exceptional conditions that program should catch. This class is extended to create user specific exception classes.
b. RuntimeException is a subclass of Exception. Exceptions under this class are automatically defined for programs.
c. Exceptions of type Error are used by the Java run-time system to indicate errors having to do with the run-time environment, itself. Stack overflow is an example of such an error.

An exception can occur for many different reasons. Following are some scenarios where an exception occurs :

Some of these exceptions are caused by user error, others by programmer error, and others by physical resources that have failed in some manner.

Based on these, we have three categories of Exceptions. We need to understand them to know how exception handling works in Java :

A checked exception is an exception that is checked (notified) by the compiler at compilation-time, these are also called as compile time exceptions. These exceptions cannot simply be ignored, the programmer should take care of (handle) these exceptions.

For Example, if we use FileReader class in our program to read data from a file, if the file specified in its constructor doesn't exist, then a FileNotFoundException occurs, and the compiler prompts the programmer to handle the exception.

Note : Since the methods read() and close() of FileReader class throws IOException, we can observe that the compiler notifies to handle IOException, along with FileNotFoundException.

An unchecked exception is an exception that occurs at the time of execution. These are also called as Runtime Exceptions. These include programming bugs, such as logic errors or improper use of an API. Runtime exceptions are ignored at the time of compilation.
For Example, if we have declared an array of size 5 in our program, and trying to call the 6th element of the array then an ArrayIndexOutOfBoundsExceptionexception occurs.

These are not exceptions at all, but problems that arise beyond the control of the user or the programmer. Errors are typically ignored in your code because you can rarely do anything about an error. For example, if a stack overflow occurs, an error will arise. They are also ignored at the time of compilation.

Whenever inside a method, if an exception has occurred, the method creates an Object known as Exception Object and hands it off to the run-time system(JVM). The exception object contains name and description of the exception, and current state of the program where exception has occurred. Creating the Exception Object and handling it to the run-time system is called throwing an Exception.There might be the list of the methods that had been called to get to the method where exception was occurred. This ordered list of the methods is called Call Stack.Now the following procedure will happen.

i. The run-time system searches the call stack to find the method that contains block of code that can handle the occurred exception. The block of the code is called Exception handler.

ii. The run-time system starts searching from the method in which exception occurred, proceeds through call stack in the reverse order in which methods were called.

iv. If run-time system searches all the methods on call stack and couldn’t have found the appropriate handler then run-time system handover the Exception Object to default exception handler , which is part of run-time system. This handler prints the exception information in the following format and terminates program abnormally.

See the below diagram to understand the flow of the call stack : 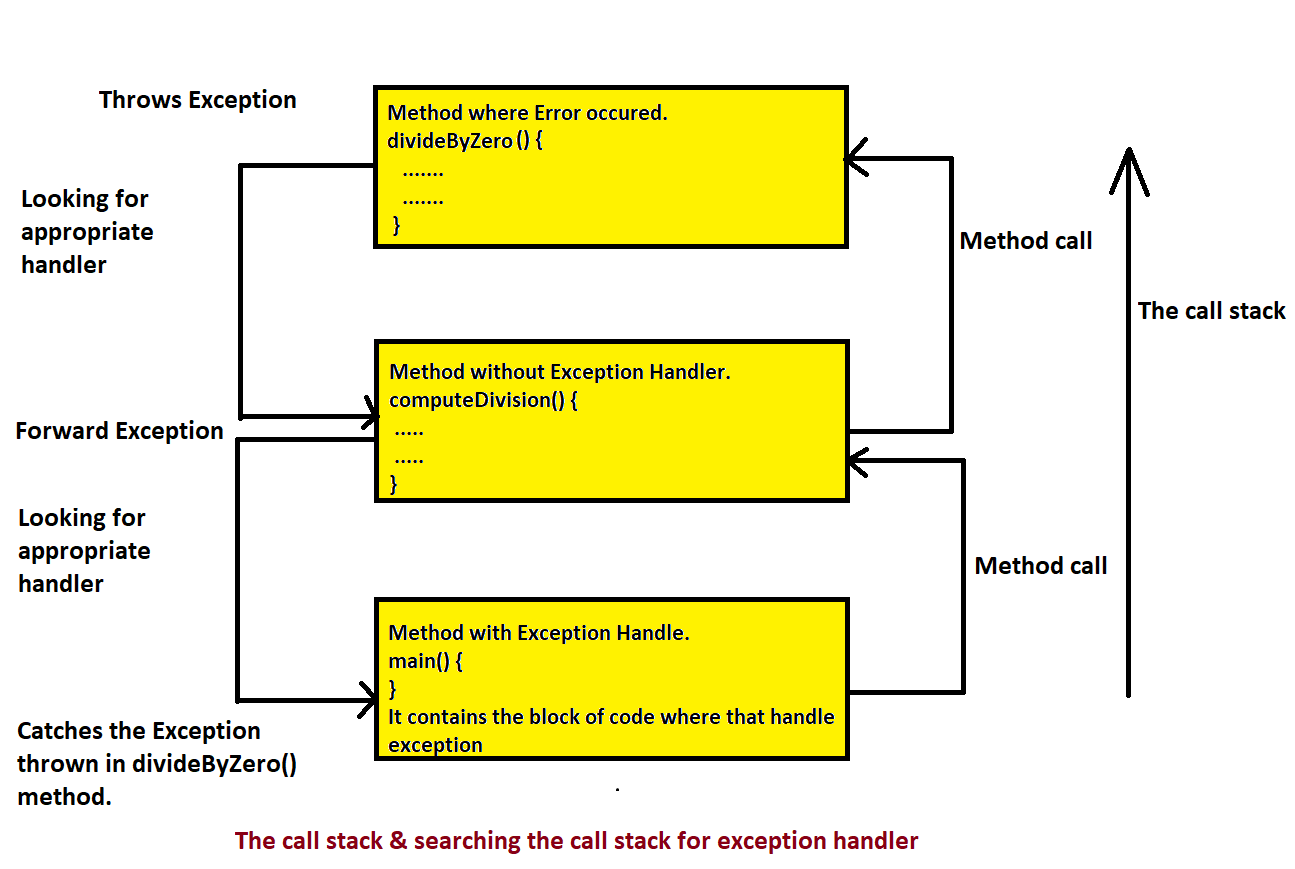 Now, here is how the above keywords work :
Program statements that you think can raise exceptions are contained within a try block. If an exception occurs within the try block, it is thrown.
Your code can catch this exception (using catch block) and handle it in some rational manner. System-generated exceptions are automatically thrown by the Java run-time system.

In other words, Try is used to guard a block of code in which exception may occur. This block of code is called guarded region. A catch statement involves declaring the type of exception you are trying to catch. If an exception occurs in guarded code, the catch block that follows the try is checked, if the type of exception that occured is listed in the catch block then the exception is handed over to the catch block which then handles it.
Now, To manually throw an exception, use the keyword throw.
Any exception that is thrown out of a method must be specified as such by a throws clause.
Any code that absolutely must be executed after a try block completes is put in a finally block.

Example of Using try and catch :

Note - 1 : Although both ArrayIndexOutOfBoundsException and ArithmeticException occured, but since first catch is of Arithmetic Exception, It will be caught there and program control will be continued after the catch block.
Note - 2 : At a time, only one exception is processed and only one respective catch block is executed.

try statement can be nested inside another block of try. Nested try block is used when a part of a block may cause one error while entire block may cause another error. In case if inner try block does not have a catch handler for a particular exception then the outer try catch block is checked for match.

In this example, we have created the validate method that takes integer value as a parameter. If the age is less than 18, we are throwing the ArithmeticException otherwise print a message welcome to vote.

Exception Handling is mainly used to handle the checked exceptions. If there occurs any unchecked exception such as NullPointerException, it is programmers fault that he is not performing check up before the code being used.

Let's see the example of java throws clause which describes that checked exceptions can be propagated by throws keyword.

Rule : If you are calling a method that declares an exception, you must either caught or declare the exception.

Case-1 : You handle the exception :

In case you handle the exception, the code will be executed fine whether exception occurs during the program or not.

Case-2 : You declare the exception

i. In case you declare the exception, if exception does not occur, the code will be executed fine.

i. Program if exception does not occur :-

B. Program if exception occurs :-

A function is a group of statements that together perform a task. Every C++ program has at least one function, which is main(), and all the most trivial programs can define additional functions. Users can create custom functions for code reusability and optimization

Multi-map in C++ is an associative container like map. It internally store elements in key value pair. But unlike map which store only unique keys, multimap can have duplicate keys.