In this problem, we will see how to generate palindromic number in a given range efficiently by exploring the patterns of palindromes.

So, first of all, let us discuss what is a palindrome, palindrome is a sequence that reads the same backward as it read forward.

Following are the examples of palindromes.

It will be read the same forward and backward illustrated below.

Lets look at one more example.

It will also be read the same forward and backward illustrated below. 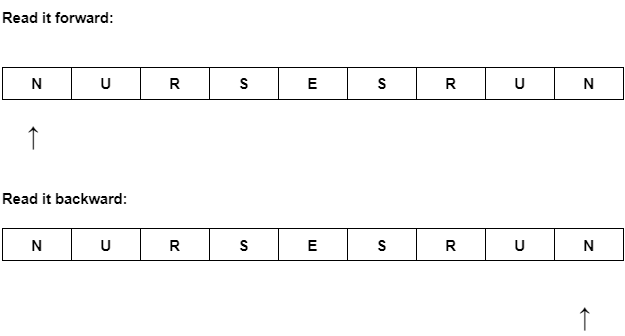 So, you see palindrome sequence will be read the same no matter how you read it i.e. forward or backward.

The same goes for the numbers a number that is read the same backward as it is read forward is called a palindromic number.

You can see no matter how you read the above number those would be read the same i.e. forward and backward.

Approaches to solve a problem

The brute force solution to this problem is simply this.

The time complexity of the above code is more than O(n) because the reverse string operation also takes additional time to convert a string into its reverse form and it depends upon the length of the number which is also variable.

So, this is the brute force solution in this solution our approach is basically to find the solution 1 by 1 in the whole dataset.

Understanding the pattern of palindromic numbers

If we try to understand the odd-length palindromic numbers we see a pattern in them the middle digit will be different and the digits on its right and left sides are mirrors of each other.
1 1 2 1 1
1 3 1
2 3 4 3 2

Now try to understand what pattern exists in the even length palindromic numbers, in the even length palindromic numbers we see that the digits which are at the start of the number the mirror image of those digits are at the end of that number, the question is how we decide the end and start of even length number the answer is quite simple to divide the number into two parts on the base of its length the first part will be the start and the second part will be the end of the number. Let's look at the following examples.
2 2
3 3 3 3
1 2 2 1

All even-length palindromic numbers have the same pattern explained above.

Let's say we have to generate all palindromic numbers which are less than 104.

1 Call the given number n(104 in our case)
2 Start iterating from number 1 and call it i
3 use i to generate the even length palindrome(with some mathematical formula) and call it pal
4 print the pal
5 increment i by 1
6 go to step 3 and repeat the process until the pal is less than n.

When the above algorithm will be completed all the palindromes have been generated which are less than a given number(104).

Code for even length palindromes

Lets dry run our above code for a number 12

This is how the above function will work to generate even length palindromes you can dry run it or execute it for any number.

Lets dry run our above code for a number 12

This is how the above function will work to generate odd length palindromes you can dry run it or execute it for any number.

Complete code for generating all palindromes less than N

A technique for reducing the dimensionality of machine learning datasets is the Feature Selector. The selection process of the Feature Selector is based on a logically accurate measurement that determines the importance of each feature present in the data.

In Deep learning, we all know that Recurrent Neuron Network solves time series data. Sequence to Sequence (or Seq2Seq for short) is a kind of model that was born to solve "Many to many" problem.