In this post we will understand one of the most important part of a Neural Network -Hidden Layers. Artificial Neural Network (ANN) is one of the technique in Machine learning. It has input layer, Hidden layer and Output Layer. 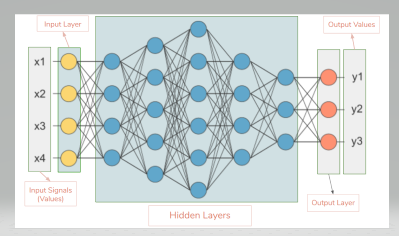 What is Hidden Layer?

The role of the Hidden Layers is to identify features from the input data and use these to correlate between a given input and the correct output.There is a well-known problem of facial recognition, where computer learns to detect human faces. Human face is a complex object, it must have eyes, a nose, a mouth, and to be in a round shape, for computer it means that there are a lot of pixels of different colors that are comprised in different shapes. And in order to decide whether there is a human face on a picture, computer has to detect all those objects.The hidden layers will break down our input image in order to identify features present in the image. The initial layers focus on low-level features such as edges while the later layers progressively get more abstract. At the end of all the layers, we have a fully connected layer with neurons for each of our classification values. 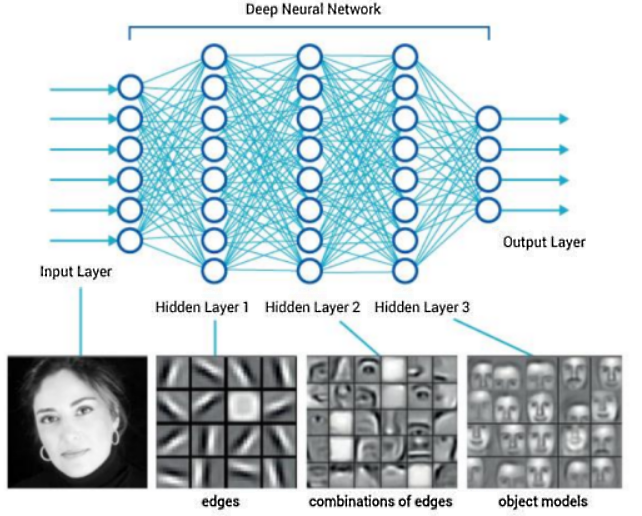 How does a Hidden Layer work?

The Number of Hidden Layers

The number of hidden layers is highly dependent on the problem and the architecture of neural network. There is no concrete rule to choose the right number. We need to choose by trial and error validation.Too few hidden layers might result in imperfect models. The error rate will be high. High number of hidden layers might lead to over-fitting, but it can be identified by using some validation techniques.The final number is based on the number of predictor variables, training data size and the complexity in the target.When we are in doubt, its better to go with many hidden nodes than few. It will ensure higher accuracy. The training process will be slower though.Cross validation and testing error can help us in determining the model with optimal hidden layers.

GoogLeNet is a 22‐layer deep CNN is the winner of ILSVRC2014 classification and detection tasks.The basic building block of the GoogLeNet is called an Inception block.The inception block consists of four parallel paths. It design a good local network topology and then stack these modules on top of each other.The Inception module includes several 1 × 1, 3 × 3, and 5 × 5 convolutions, while 1 × 1 convolutions are used to compute reductions before the expensive 3 × 3 and 5 × 5 convolutions.Finally, the outputs along each path are concatenated along the channel dimension and comprise the block’s output. The commonly-tuned parameters of the Inception block are the number of output channels per layer. 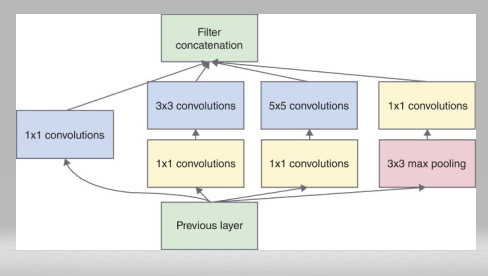 GoogLeNet improved state of-the-art recognition accuracy using a stack of Inception layers.GoogLeNet connects multiple well-designed Inception blocks with other layers in series.The ratio of the number of channels assigned in the Inception block is obtained through a large number of experiments on the ImageNet dataset.GoogLeNet was one of the most efficient models on ImageNet, providing similar test accuracy with lower computational complexity. The difference between the naïve inception layer and final Inception Layer was the addition of 1x1 convolution kernels. These kernels allowed for dimensionality reduction before computationally expensive layers. The GoogLeNet model is computationally complex.GoogLeNet consists of 22 conv-layers in total (the deepest one at that time),and achieves the top-5 errors of 6.7%, which was far greater than any network before it. GoogLeNet had 7M network parameters when AlexNet had 60M and VGG-19 138M. The computations for GoogLeNet also were 1.53G MACs far lower than that of AlexNet .

With this article at OpenGenus, you must have a complete idea of hidden layers in Machine Learning models. Enjoy.

You are given an array of length N. You have to find the longest increasing subsequence from the given array. We will try to solve this problem using Fenwick Tree which will take O(N logN) time complexity.

A constructor is a special member function which enables the object of a class to initialize itself when it is created. We have explored different types of constructors, constructor overloading and constructor with default arguments.