In this article, we have explored how Internet Speed is measured which involves upload and download speed. This will help you understand how speed test by Ookla works and how you can create a similar tool to measure Internet Speed. 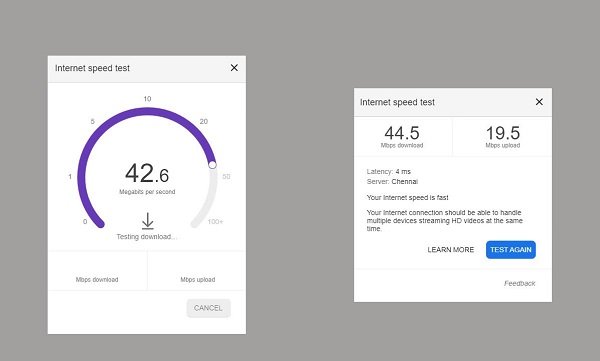 What is Speed Test?

Speed Test is a way to measure the speed between a device and a test server employing the device internet connection. However there are some defining factors that can influence the latency rate, which includes the type of device i.e : Phones, PCs, tablets and others. The aformentioned devices have very unique Wi-Fi and cellular radio proficiencies. In conclusion speed test employs TCP testing with a HTTP fallback for utmost affinity. Additionally speed test assess ping (latency), the download speed and upload speed of a device.

This type of test is implemented by calculating the time it takes the server to reply the resquest sent by the user's device/client The client sends a message to the server, after receiving the message, the server sends a reply back. The round-trip time is measured is measured in ms (milliseconds).

This is replicated as many times as possible with the lowest value deciding the final outcome.

Deciding the number of threads for testing Internet Speed

A standard Speed test tool will make use of up to four (4) http threads in the course the download and upload part of the test. Nevertheless, it will only use more than two threads if they are neccessary to precisely determine the speed, in order to reduce the effect of HTTP overhead on lower-speed connections.

After the preliminary test, if the connection speed is at least 4 megabits per second, then the tool will use four threads. Or else, it will resort to two threads.

With older browser like Internet Explorer 7 and earlier versions of Firefox (Firefox 2 and earlier versions) the browser strictly rigorously stick to the HTTP specification of only two threads per d3dvFor older browsers, to scale up to four(4) threads this means the third and fourth thread will be opened to a secondary URL which is provided by the host that points to the same server. Using this method we can work around the constraint of older browsers and determine the higher speed connections precisely. Modern browser hosts have a working secondary URL, However if the test is perfomred from an older browser to a host that doesn't, Speedtest.net will be limited to two threads at maximum. This is why its advisable to have an udated browser.

Why Should I Test My Internet Speed?

Traditional speed tests evaluate yield, it is principal to measure Internet quality of your connection. Your ISP(Internet Service Provider) can use old copper connections and others dispathc your service through fiber optic connectivity. These, and considering other factors, may impact latency, jitter and packet loss. And, these affect your bandwidth quality.
Subject to the fact maybe you are using your internet connection for VoIP, video conferencing or an all-important applications, you may need a higher quality service. Speed test does this for you and helps highlight potential risks to your business.

Using an Online Game as a case study. Have you ever noticed that an oppossing player always seems to have the jump on you? This maybe as a result of the player having a faster ping(latency). In general, an acceptable latency (or ping) is anywhere between 40 – 60 milliseconds (ms) or lower, while a speed of over 100ms will usually mean a noticeable lag in gaming. Below is a guideline:

But for general browsing and streaming, anything under 100ms is fine.

With this article at OpenGenus, you must have the complete idea of how Internet Speed test works.

You can run a speed test on the internet. According to Google to run the test, you'll be connected to Measurement Lab (M-Lab) and your IP address will be shared with them and processed by them in accordance with their privacy policy. M-Lab conducts the test and publicly publishes all test results to promote Internet research. Published information includes your IP address and test results, but doesn’t include any other information about you as an Internet user.

In this article, we will work on the C++ project of Typing Speed. We will learn about implementation of the complete program in C++ which will check our typing speed.