Data compression is the encoding of data in such a way that it takes up less memory space while storing. Huffman coding and Shannon Fano Algorithm are two data encoding algorithms.

Differences between Huffman and Shannon Fano algorithm are as follows:

We will go through the basics of encoding methods and the two algorithms: Huffman coding and Shannon Fano Algorithm so that we can understand the differences better.

In fixed length encoding, length of code for every character is fixed.
Advantage: Decoding such files is trivial
Disadvantage: This method results in lot of wastage of space. 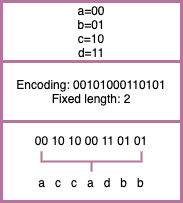 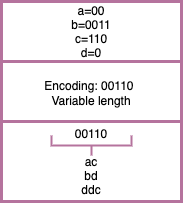 One of the ways to solve this problem is prefix codes, i.e. no codeword is a prefix of another codeword. For example, if the codes are {0,1,11}, this does not satisfy the property of prefix codes since ‘1’ is a prefix of ‘11’.
To decode, find the first valid codeword and keep on repeating the process till the string is decoded. 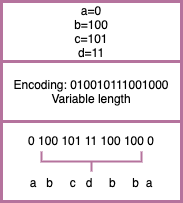 Huffman coding is a very popular algorithm for encoding data. Huffman coding is a greedy algorithm, reducing the average access time of codes as much as possible.
This method generates variable-length bit sequences called codes in such a way that the most frequently occurring character has the shortest code length. This is an optimal way to minimize the average access time of characters. It provides prefix codes and hence ensures lossless data compression and prevents ambiguity.

How have we reduced the size?

Given n nodes,
Heapifying n nodes = O(n)
In every iteration we take out 2 nodes and insert 1 node. Therefore for n nodes,it will take n-1 iterations to make the tree
While heap has 2 or more nodes: O(n) (Justified above)
Extract min from heap twice O(logn)
//some constant time operations
Insert x in heap O(logn)
To fetch code for all the nodes, traverse the tree O(n)
Worst case time complexity: Θ(nlogn)

Shannon Fano Algorithm is an entropy coding technique used for lossless data compression. It uses the probabilities of occurrence of a character and assigns a unique variable-length code to each of them.
If c is a character,
Probability(c) = Frequency(c) / sum of frequencies

What is the worst case time complexity of Huffman coding

What are prefix codes?

With this article at OpenGenus, you must have a complete idea of the differences between Huffman coding and Shannon Fano Algorithm. Enjoy.

This article explains the advanced techniques proposed by Jason Yosinski to understand the hidden working pattern of Neural Networks in the paper "Understanding Neural Networks Through Deep Visualization".

We have explored the types of Data Encoding algorithms. Data Encoding is the process of conversion of data in a form suitable for various types of information processing. Encoding is used for data transmissions, data storage, and data compression.