In this article, we will understand about Im2row Convolution which is an approach to perform Convolution by modifying the layout of image and filter. It is a better alternative to Im2col.

Before discussing Im2row Convolution, we will also look at im2col and it's drawbacks.

CNNs are cutting-edge models for image classification, object recognition, semantic, instance, and panoptic segmentation, picture super-resolution, and denoising, among other computer vision tasks. CNNs are utilised in speech synthesis and Natural Language Processing in addition to computer vision. Typically, between 50-90% of inference time in CNN models is spent in Convolution.

Now, let’s get back to out topic, Im2row convolution, Im2row Convolution is actually a better version of im2col convolution. So what are the drawbacks of Im2col Convolution, let’s understand that first.

Convolutions have become an important feature of current neural networks because of its capacity to collect local information and minimize the number of parameters with weight sharing.

Im2col convolution, also known as Image Block to Column, is a method that involves flattening each window and stacking it as columns in a matrix. 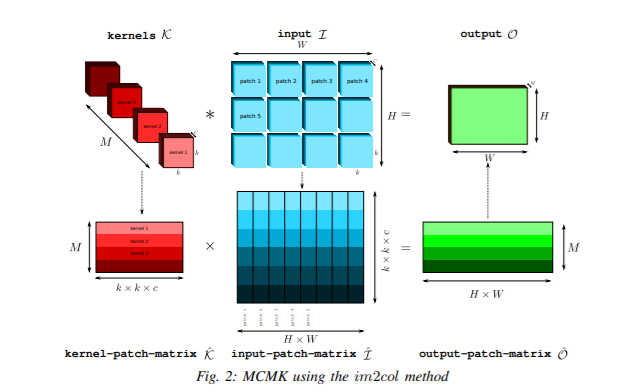 Now, let’s look at the drawback of im2col:

• Im2col transformations are expensive as well as memory-intensive.
• Removing im2col conversions improves performance by up to 62 percent.
• When im2col accounts for a considerable portion of the Convolution runtime, the speed advantage is especially noticeable for Convolutions with a limited number of output channels. (im2col is not suitable for large number of output channels).
• The space explosion created by creating the column matrix is one of im2col's significant drawbacks.
• Im2col may perform well on GPU, but is a poor choice for CPU implementation.

Now, lets have a look at im2row convolution.

Let’s look at the traditional im2row based algorithm. 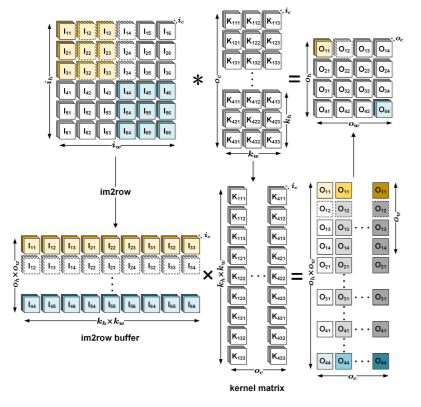 The im2row process of I is shown on the left side of Fig. Each convolutional window in the input is flattened to 1D and stored in an im2row buffer row. The im2row buffer then includes input feature blocks in oh x ow rows and kh x kw columns. The relevant output feature block is calculated for each row of the im2row buffer. The conversion of K is shown in the centre of Fig. Each kernel of K is flattened into a column of a kernel matrix with this conversion. Each column of the kernel matrix is utilised to determine the output feature's corresponding channel. As a result, we store the kernel matrix in column-major order for greater spatial locality. However, this algorithm of im2row occupies enormous memory space and needs to copy numerous data.

So, let’s look at a fast convolution approach that reduces the amount of data transferred by im2row while keeping the buffer size minimal.

The first column of O is then calculated by matrix multiplying the corresponding im2row matrix with the convolutional kernels, as seen in the first four rows of the output on the right side of Fig. The im2row buffer size and the quantity of data transferred are both identical in i2r_1.

After computing the first column of O, a second im2row unfolding, dubbed i2r_2, is done. It's evident that i2r_2 and i2r_1 share some data. The input features in the second and third columns are shared in the example presented in Fig., but the input features in the fourth column are novel. As a result, as shown in red in Fig. 1, i2r_2 only has to update the data in the fourth column of I into the reusable im2row buffer. After i2r_2, the analogous im2row matrix is matrix multiplied with the convolutional kernels to get the second column of O, same like in i2r_1.

Advantage of the following proposed algorithm:

Now let's flatten the kernel and do matrix multiplication.

With this article at OpenGenus, you must have the complete idea of Im2row Convolution.

Exponential Linear Unit (ELU) is an activation function which is an improved to ReLU. We have explored ELU in depth along with pseudocode.

In this article, we have presented two algorithms to find the Longest Substring with at Least K repeating characters.