In memory Database is a type of Database that is stored in main memory (instead of hard disk) which makes to significantly fast (100X improvement) with some limitations. In this article, we explain everything about in-memory database and present an real system design example where in-memory database is used.

A Database is a collection of structured data which are generally stored and accessed from systems. There are various types of database that are used by applications, however we are going to focus on in memory databases.

Some of the examples of in memory databases are:

About In Memory DataBases

The biggest advantage of in memory databases are that they store data in systems main memory which produces quicker results. As the data is stored in main memory the time required to query anything is faster as there is no need to reach out the hard disk. Data Storage for in memory database relies in the systems random access memory (RAM) instead of the systems disk drives , the data is directly accessible by applications.

Traditional database use disk drives to store data, writing data to the disk is done in a atomic fashion where all the writes are registered.

The structure of in memory databases are independent of disk blocking issues which is advantageous as it allows them to directly navigate from column to column or row to row which allows changes to be implemented by allocating memory blocks and rearranging pointers, hence allowing updating values to be comparatively faster in case of in memory databases.

Just like a on drive database in memory databases allow us to add data , update them or delete them.

Volatile In memory databases support three of the ACID operations that is:

To add durability, we use file snapshots ,transaction logging or high avalability.

Let us look into detail on some of these in memory databases examples.

Redis is one of the most popular in memory database which is a persistent key value based database. It supports multiple forms of datatypes and data structures like list,sets etc.

Redis works by mapping keys with values and can be used as a primary database or can be used together with other databases like mongodb, mysql etc to improve performance and increase load capacity of a system.

Memcached is an open source distributed memory caching system and is used for speeding up database operations by reducing its load. Everytime a database query comes over memecached helps storing the data objects in dynamic memory.
Similar to redis memcached stores data in key value pairs . It is easy to setup and is highly scalable for use.

HazelCast database is also an in memory database based on key value pairs which stores data as a set of unique identifiers. HazelCast is horizontally scalable so we can join hundreds of nodes to form a cluster to combine terabytes of memory to be used. It replicates data across the cluster and provides many ways to tune availabilty and relability.

In memory vs on disk databases

In memory databases are optimized for high performance and use specialized data structures and index structures to ensure data is always in main memory. On disk databases on the other hand stores and retreives data directly from disk drives.

In memory databases are much faster compared to on disk databases as the data is present in the memory itself so it eliminates the time required to access data from the disk.

UseCases of in memory databases

Some of the areas where they are being used are

System Design Example Use Case of in memory Database

Let us look at a simple example of using in memory database with a on disk database.

Let us consider a very simple social media application where we have just two options for now (right now ignoring authentication, followers and other services) , to view the dashboard and post a image.

Lets say we use on-disk database like mongodb and everytime a user views his dashboard in which the content is retreived from the database and when user posts an image the data is added to database.

Now as users scale the latency or time required for the operation to retreive content from the database will increase which could lead to bad user experience. 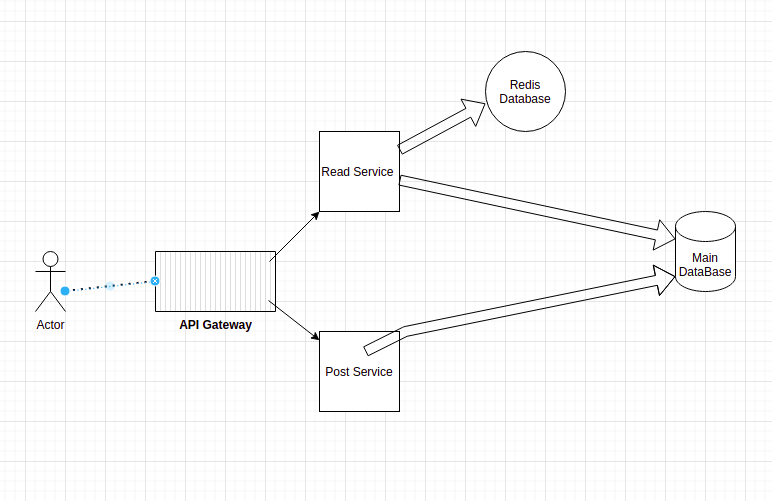 Here there is a user who interacts with our application which has two services one to read data and other to write data , based on the request by a user it is redirected to the required service.

When a user posts his data it directly interacts with mongodb however when a user reads data we first check redis if it is already present there, if it is present we display it to user and the operation is comparetively faster as the data is retreived from memory. If the data is not present in redis we query the main database and display it to user also simulataneously add that data to redis so that we can retreive it faster from redis directly later on.

With this article at OpenGenus, you must have the complete idea of in memory database along with real life system design example.

In this article, we have covered the essential components of Ruby such as OOP concepts like class and object, Data Types, Methods, Variables and much more.

In this article, we have explained what is 132 pattern problem and have discussed 3 different approaches to solve it in linear time O(N) where brute force approach takes O(N^3) time.