In this article, we have explained Inter-process communication (IPC) in Operating System, why is IPC needed and various ways to achieve IPC like using shared memory, message passing, buffering, pipes and more.

Let us get started with Inter-process communication & it's types in Operating System.

The processes that occur concurrently in the Operating systems can be of 2 types :

Why need communication among processes ?

There are several reasons for the same. Some of them are :

What is Inter-process communication ?

It is useful mainly in the environment where the processes reside on different computer systems connected via any type of network. A very simple and self explanatory example is the chat system used in World Wide Web.

There are 2 basic models for IPC: 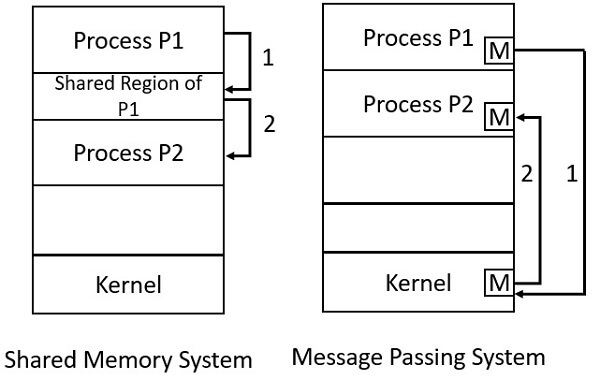 Processes communicate by Reading and Writing data in the shared area. Operating system does not have any control over data or location. It is solely determined by the processes.

Message passing provides a mechanism to allow processes to communicate and to synchronize their actions without sharing the same address space.
It is very useful in case where the tasks or processes reside on different computers and are connected by a network.

Messages can be of fixed or variable size. Methods for message passing operations:

In Direct communication,
Each task explicitly pass the message along with passing name of process to which it is passing.

In Indirect communication, Message passing is through mailboxes. The tasks communicating should have a shared mailbox.

There are 4 cases:
->Blocking send: The sending process is blocked until message is received by receiver task.
->Non-Blocking send: The sending process sends the message according to it's requirement without considering whether message is received or not at receiver end.
->Blocking receive: The receiving process is blocked until message is available.
->Non-Blocking receive: The receiving goes on accepting either the message or null information continuously.

When there are both receiving and sending blocked, that case is called Rendezvous.

The messages to be exchanged reside in temporary queue. It can be implemented in 3 ways:

Pipes act as a channel between 2 processes to communicate. These were one of the first IPC mechanisms in early UNIX. Pipes allow a mechanism in which output of one process is input of another process. Pipes function as FIFO.

There are 2 types of pipes:

2. Named pipes: These can be bidirectional, require no parent-child relationship and is used for communication for several processes. These pipes continue to exist after communicating processes have finished. Named pipes are referred to as FIFOs in UNIX.

Just as pipes are of two tastes (i.e. named and ordinary), Sockets also do. Similarly these enable channel-based communication for processes on same device. But Network sockets allow IPC for processes on different hosts via networking. A socket consists of an IP address and a port number.

Generally sockets use client-server architecture. The server here waits for client request by listening to a specified port. After receiving the request, server accepts the connection and the connection is completed. The client process has a port assigned to it by host computer.

Semaphores are used to lock/unlock the critical region which is shared among processes. If a single region is shared by multiple processes, there is a possibility of deadlock. Thus semaphore comes into play to manage message passing.
Semaphores are of 2 types: Binary semaphores(having 2 states 0 or 1) and Counting semaphores(different resource counts).

A very basic example for implementation of semaphores is: Consider the case of printing. We are having 5 printers(assuming 1 printer will print 1 at a time). We request to print 3 jobs. These jobs will be given to 3 printers. Again 4 jobs came into request while previous was executing. So now the 2 printers free will schedule the 2 requests and other 2 requests will be executed when one of the printers will be free. This is how counting semaphores are implemented. Semaphores manage the entry and exit of processes in critical section (or the execution).

With this article at OpenGenus, you must have a strong idea of Inter-process communication & it's types in Operating System.

We have presented the Context free grammar (CFG) for properly nested parentheses or Balanced Parentheses / Expressions using all three set of brackets.