Perl is a general-purpose programming language, it is used in text processing and manipulation, systems administration, network programming, GUI development, web development just to name a few. In this article, we go over a brief introduction to Perl.

Perl is a general-purpose programing language that finds applications in various areas. We look at how to run Perl in Linux, the basic Perl syntax, variables and variable scoping, and operators used with Perl.

We can check for the Perl version currently installed by writing:

However, if Perl is not installed, we can install as shown in article.

How to run a Perl program.

On the Linux command-line, we can execute a Perl program as follows:

We can also create a file with the .pl file extension.

We add the following code:

To execute the script we write:

Here we look at the basic syntax, for more detailed documentation the link is helpful.
Comments.
In Perl, comments are preceded with a # character as can be seen from the above code snippet.

For string literals we can use either single or double quotes, however when we are using special characters such as tabs(\t) or newline characters(\n) we use double quotes:
An example:

In Perl we have scalars, arrays and hashes variables. Here we look at all three by examples, for more detailed documentation.

Scalars
An example of a scalar is:

Arrays.
We initialize arrays as follows:

We can also sort arrays and reverse as follows:

Hashes
A hash is a key-value pair, for example:

Hashes can also be nested, for example:

Instead of using the my keyword we can just declare variables without is, for example:

Here, we have initialized the variable name without using the my keyword, this makes it a global variable. As the size of the program grows so as the number of global variables and this is considered bad programming practice.

We use the my keyword to lexically scope a variable and thus it will only be available to its current block.
An example:

We will have the following error.

while loops.
A while loop executes as long as the specified condition holds. In Perl we write while loops as follows:

until loops.
Just like shell we also have until loops in Perl:

for loops
For loops are written in a similar way we write loops in Java or C/C++ programming languages:

foreach loops.
For each loop in Perl is written as follows: 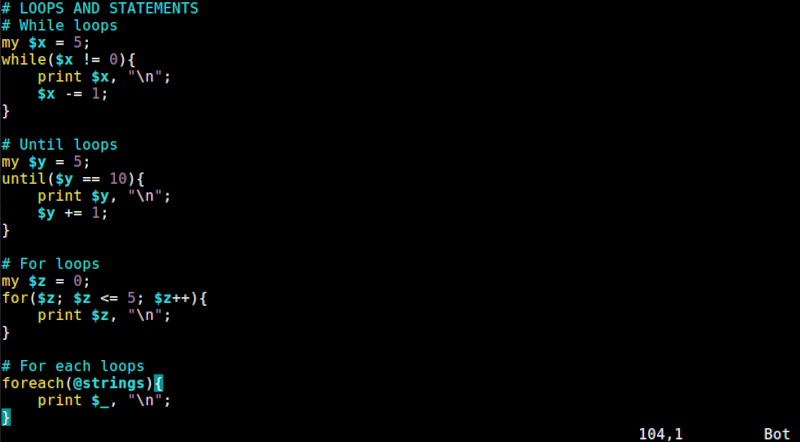 if-else, unless statements.
In Perl we have if-else statements which we write as follows:

We also have the unless statement that negates as follows:

We can also write if(!condition) as a negation.

In Perl we have the following operators:

Perl is used in text processing and manipulation, systems administration, network programming, GUI development, web development just to name a few. We have looked at the basics of Perl language

In this article, we have explained the idea of using Python to send email in Gmail with a complete Python implementation example.

The finger command is used to get all information about system users. With it, we get information such as login name, user name, login time, idle time and much more. We look at commonly used finger commands in Linux.