iptables are programs used by systems administrators to define firewall rules in Linux.

A TARGET is an action we specify that will apply when a packet matches a rule we have defined.

A POLICY is the default action taken if no rule matches.

Different types of Iptables are:
Filtering, these will be used to filter incoming and outgoing packets. They have input chains such as INPUT, OUTPUT, FORWARD.
NAT(Network Access Translation), this table stores rule that handles the routing of packets to networks that are not directly accessible. Its chains are PREROUTING, OUTPUT, and POSTROUTING.
Mangle, this is used for specialized packet altering e.g, adjusting the IP header for packets. It has all chains.
Raw, we use it for exempting packets from connection tracking. Its chains include PREROUTING and OUTPUT.
security, these tables to define rules for mandatory access control Its chains are, INPUT, OUTPUT, FORWARD.

To get started we will update the system and install the iptables package:

Note that, if we want to preserve iptables rules that we have defined even when the system reboots we install the iptables-persistent package:

We can also save changes so the rules are preserved by writing:

To write iptables commands we use the format shown below

To check the current status of the tables we write:

Let's create a rule that allows traffic from our own host localhost:

lo stands for localhost and -i specifies the interface.

We can also control traffic using the IP addresses of host machines. For example to allow traffic only from a specific host we write:

And to reject packets from a host we write:

Dropping packets is whereby when packets are received the host doesn't send back a reply. The packets are dropped. To DROP incoming packets, we write:

To undo this, we write:

We can also specify which ports can have traffic through them. For example to drop traffic from port 69 for TFPT service we write:

To remove a rule we no longer need from the iptables we use the -D option:
For example, to remove a rule, we first list all the rules so we are sure:

Then to remove the rule from the OUTPUT chain we write:

To remove all rules we use the flush option: 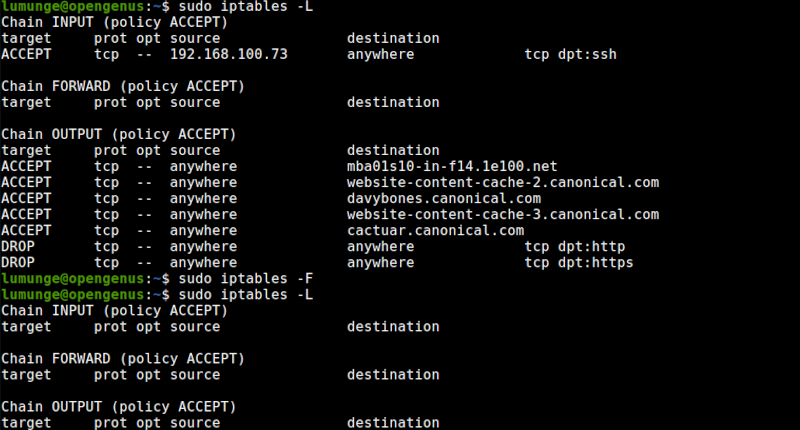 To restore an iptables configuration we write:

We have a host. It cannot be accessed except via ssh and only using a single specific host. We also want this machine to update itself automatically and access a specific number of company domains.
For this we have to apply the following rules/commands:

A means that we are adding, the rule will become part of the OUTPUT chain. We use -p option followed by tcp to mean that the rule applies for tcp packets, the -d option if followed by the destination.
The action is to ACCEPT which we have specified and is preceded by the -j option.

Now to block access to other domains, we have to create two rules to DROP traffic on HTTP and HTTPS ports 80 and 443:

Now to put all this in a script:

First, we change the permissions of the script to execute it:

If the execution was successful our tables should look as shown above.

Now if we try to reach google using, it can be reached however, when we try to reach another different domain, it will be unreachable since we have not specified a rule.

If fails to reach yahoo.com

We can also reach ubuntu for automatic updates

We have learned about iptables, chains, and how to use the iptables command to manage firewall rules in Linux.

firewalld is a Linux utility used to manage firewall rules. In this article we discuss firewall management using firewalld.

In this article, we have explained the approach to find the ASCII value of a character in various Programming Languages along with the introduction to ASCII.