We are given an array and we need to find the minimum number of operations required to make GCD of the array equal to k. Where an operation could be either increment or decrement an array element by 1.

What is a GCD?

Heading towards the solution

It looks like in order to change the GCD to k, we will need to shift every array element towards the closest multiple of k. Now, how are we going to do this?
See, by shifting we basically mean applying a bunch of increment or decrement operations altogether such that we can move in larger steps, say x (x>=1). Next up is moving to the "nearest" multiple. How could we decide this?

We can easily claim that the two possible solution for x are none other than ele % k and k - ele % k (where ele % k is remainder value we will get on dividing ele by k and k - ele % k indeed is possible difference from the next multiple). So aren't we done now? we could just chose the minimum of two values?

Seems like we are stuck. What could we do in order to keep the GCD as k even if the array elements shift towards a multiple of k which is not 1?

You could make an important note here that the maximum value, a GCD can hold is none other than the value of minimum element in the array.

So, taking this as the hint, we could change the minimum element to k, that will make sure that we don't shift GCD beyond k.(because the highest common factor between the array elements will be k only) 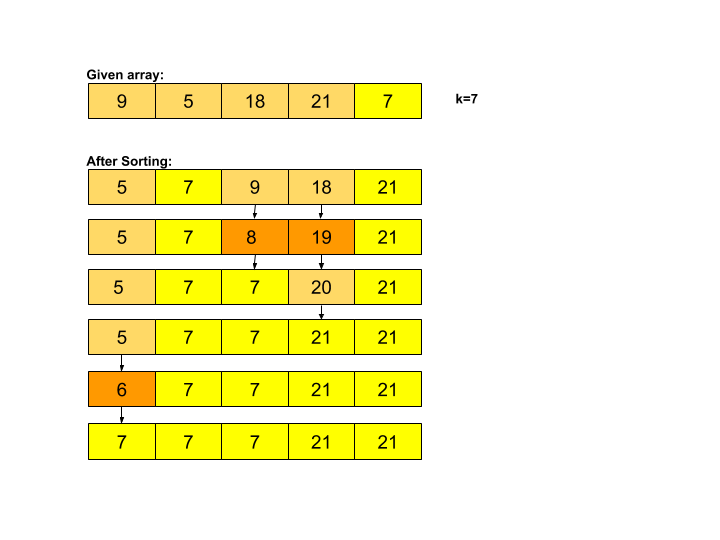 Learn other interesting Mathematical Algorithms for other algorithmic problems 😊

Since we are calculating remainder values, we need to take care of "Divide by Zero Error" that might arise when k = 0. As in the code, we can simple check for k and claim it "Invalid" if it is zero. It doesn't make sense for GCD to be equal to 0 right.

With this article at OpenGenus, you must have the complete idea of the algorithm to find the minimum number of increment and decrement operations to make GCD of an array 'k'. Enjoy.

We need to find total number of substrings that are divisible by 8 but not 3 in the given string. We have solved this problem using Dynamic Programming in linear time O(N) where the brute force approach takes O(N^2) time.