This article explains the conference paper "Show and tell: A neural image caption generator" by Vinyals and others. Here we try to explain its concepts and details in a simplified manner and in a easy to understand way. This paper showcases how it approached state of art results using neural networks and provided a new path for the automatic captioning task.

In a very simplified manner we can transform this task to automatically describe the contents of the image. This may sound simple as per a human task but when it comes for machine to be able to perform this task seems fascinating. It connects the two facets of artificial intelligence i.e computer vision and natural language processing. This paper presents a deep recurrent based neural architecture to perform this task and achieve state-of-art results.

Earlier work shows that rule based systems formed the basis of language modelling which were realtively brittle and could only be demonstrated for limited domains like sports, traffic ets.

Statistical Machine translation has shown way for achieving state-of-arts results by simply maximizing the probability of correct translation given the input sequence. What actually happens is, a simple RNN network is fed the input sequence which encodes it into a vectorized representation of fixed dimensions and using this representation to decode the fixed dimensional vector to produce the required result. This architecture is adopted in this paper where in the image is given as input instead of input sentence.

Thus, we need to find the probability of the correct caption given only the input image.

where theta is our model's parameter, I = image, S = correct description.
Since S is our dexcription which can be of any length, we will convert it into joint probability via chain rule over S0 , ..... , Sn (n=length of the sentence).

Now instead of considering joint probability of all the previous words till t-1, using RNN, it can be replaced by a fixed length hidden state memory ht. This memory gets updated after seeing a new input xt using some non-linear function(f) :

LSTM is used for the function f and CNN is opted as image encoder as both have proven themselves in their respective fields.

RNN faces the common problem of Vanishing and Exploding gradients, and to handle this LSTM was used. LSTM has achieved great success in sequence generation and translation.
LSTM is basically a memory block c which encodes the knowledge learnt up untill the currrent time step. It's behaviour is controlled by the gate-layers which provides value 1 if needed to keep the entire value at the layer or 0 if needed to forget the value at the layer. 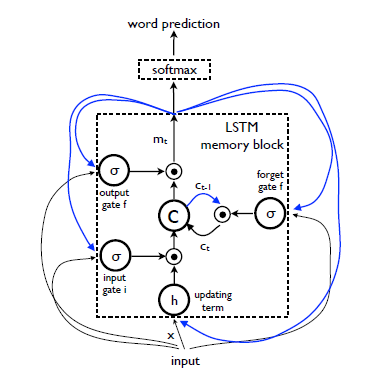 In it's architecture we get to see 3 gates:

The output at time t-1 is fed back using all the 3 gates, cell value using forget gate and predicted output of previous layer if fed to output gate.

The last equation m(t) is what is used to obtain a probability distribution over all words. 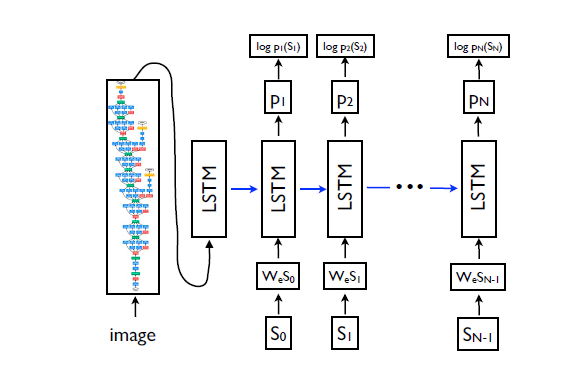 We can infer that it seems as if a copy of a LSTM cell is created for the image as well as for each time step for producing words, each of those cells has shared parameters, and the output at time t-1 is fed back the time step t.
The unrolled LSTM can be observed as

Each word is represented in one-hot format with dimension equal to dictionary size.
S0 and SN are special tokens added at beginning and end of each description to mark the beginning and the end of each sentence. Stop token signals the network to stop further predictions as it marks the end of the sentence.
Now to embed the image and the words into the same vector space CNN (for the image) and word embedding layer is used.

We can have two architectures where we feed the input image at each time step with the previous timestep knowledge or feed the image only at the beginning. The first architecture poses a vulnerability that the model could potentially exploit the noise present in the image if fed at each timestep and might result in overfitting our model yielding inferior results.

For loss, the sum of the negative likelihood of the correct word at each step is computed and minimized.

This loss function can now be minimized w.r.t Image, all parameters of LSTM, and word embeddings W(e).

The various approaches for generating the captions are as follows:

Beam Search better approximated for the task and hence was appointed for all the further experiments with a beam size of 20. Beam size = 1 yielded pretty bad results.

A number of datasets are available having an image and its corresponding description writte in English language.

Each dataset has been labelled by 5 different individuals and thus has 5 captions except SBU which is a collection of images uploaded by owners and descriptions were given by them, so it might not be unbiased and related to image and hence contains more noise.
PASCAL dataset is only provided for testing purpose after the model is trained on other dataset.

The most dominant problem faced was related to overfitting of the model. Since this task is purely supervised, just like all other supervised learning tasks huge datasets were required. But the quality datasets that were available had less than 100000 images (except SBU which was noisy). Data driven approaches recently gained lots of attention (thanks to IMAGE_NET dataset having almost 10 times more images than what is used for this paper). Still our NIC approach managed to produce quite good results and these are only expected to improve in the upcoming years with the training set sizes.

Several methods for dealing with the overfitting were explored and experimented upon.

Stochastic gradient was used for the training the uninitialized weights with fixed learning weight and no momentum. Only CNN had fixed weights as varying them produced negative effect. Embedding size and size of LSTM memory had size of 512 units.
Basic tokenization was appointed for descriptions preprocesing and keeping all the words in the dictionary that appeared at least 5 times in training set.

Previous state of art results for PASCAL and SOB didn't used image features based on deep learning, hence a big improvement was observed in these datasets. PASCAL didn't had its own training set so model trained on MSCOCO dataset was used for evaluating over the PASCAL test set.
Human scores were also computed by comparing against the other 4 descriptions available for all 5 descriptions and the BELU score was averaged out. As per the sgnificant improvements in the field of machine translation, it showed that BELU-4 scores was more meaningful to report. 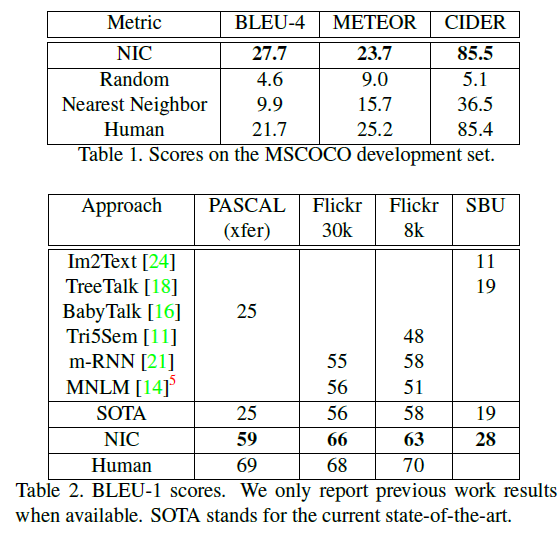 Results shows that the model competed fairly with human descriptions but when evaluated using human raters results were not as promising. This suggests that more work needs to be done towards a better evaluation metric.

Many models were trained on several datasets which led to the question whether a model trained over one dataset can be transferred to a different dataset and how the mismatch could be handled via increasing the dataset or improving the quality.

The very first case if observed between Flikr8k and Flikr30k dataset as they were similarly labelled and had considerable size difference. We witnessed a improvement of 4 BELU points over switching from 8k to 30k. But when compared for MSCOCO data set, even though size increased by over 5 times because of different process of collection, led to large difference in the vocab and thus larger mismatches. BELU points degraded by over 10 points. However, the descriptions were still not out of context.

On SBU, even though it had a very large dataset but it's weak labelling made task with this dataset much harder because of the noise in it. MSCOCO model on SBU observed BELU point degradation from 28 to 16.

As reported earlier, our model used BEAM search for implementing the end-to-end model. Below figure shows our model returning K best-list form the BEAM search instead of the best result. 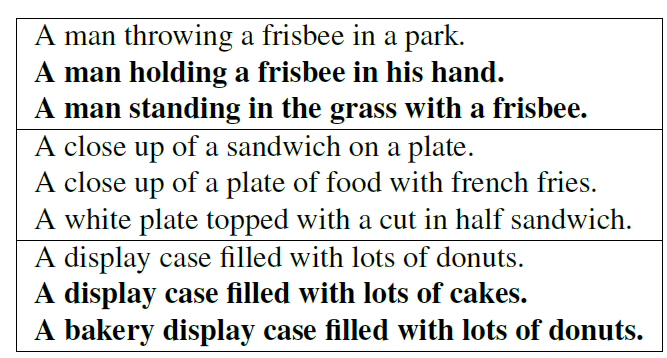 Even though we can infer that this is not the best of the metric and also a unsatisfactory metric for evaluating a model's performance, earlier papers reported results via this metric. Surprisingly NIC held it's ground in both of the testing meaures (ranking descriptions given image and ranking image given descriptions). Below table shows results over Flikr30k dataset.

We had earlier dicussed that NIC performed better than the reference system but significantly worse than the ground truth (as expected). This concludes the need of a better metric for evaluation as BELU fails at capturing the difference between NIC and the human raters.
Examples of rated descriptions 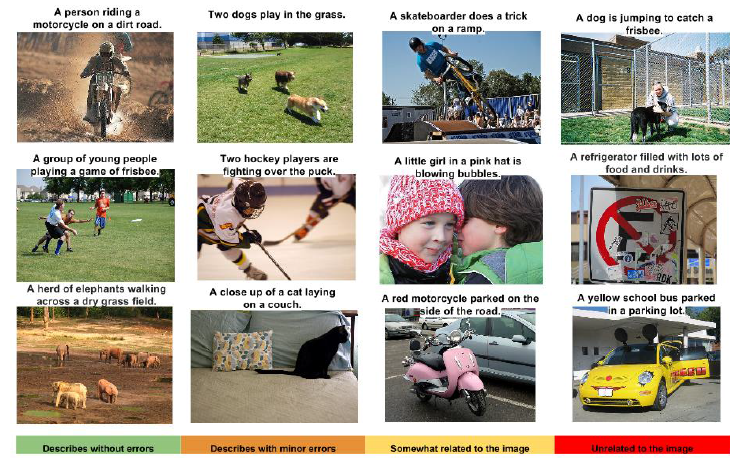 Word embeddings were used in the LSTM network for converting the words to reduced dimensional space giving us independence from the dictionary size which can be very large. In our model the word embedding layer is trained with the model itself.
Having objects like "horse", "pony" , "donkey" close to each other in the vectorized space after passing through the word embeddings encourages the CNN model to extract more details and features distinguishing the similar objects. Also in extreme cases, the closeness of objects like "unicorn"(having less examples) to more common similar object like "horse" would provide more details about the "unicorn" too and thus these derived features would ultimately help the model which would have been lost while using the traditional bag-of-words models.

With this we have developed an end-to-end NIC model that can generate a description provided an image in plain English. This model was based on a CNN encoding the image into compact space followed by RNN to produce a description. Model was based on a simple statistical phenomena where it tried to maximize the liklihood of generating the sentence given an input image. Experiments on several datasets shows our model performed well both quantitatively (BELU score , ranking approaches) and qualitatively (diversity in sentences and related to the context). We also infered that the performance of approaches like NIC increases with the size of the dataset.

Hope you enjoyed reading this paper analysis at OPENGENUS
THANK You

A self-balancing binary tree is any tree that automatically keeps its height small in the face of arbitrary insertions and deletions on the tree. We have explored different types like 2 3 tree, Red Black tree, AVL Tree, B Tree, AA Tree, Scapegoat Tree, Splay Tree, Treap and Weight Balanced Tree.

Regex Expressions are a sequence of characters which describe a search pattern. It is generally used for 'find', 'find and replace' as well as 'input validation'. This article shall focus on how to write a Regex Expression in Java.