Very few people know that PageRank algorithm which is the first algorithm to be used by Google Search Engine was a USPTO patented algorithm and the patent rights expired only in 2019. The twist is Google was not the owner of PageRank patent.

This restricted other companies to use the same algorithm in their search engine. Google had several other variants of PageRank which they patented and are still valid. 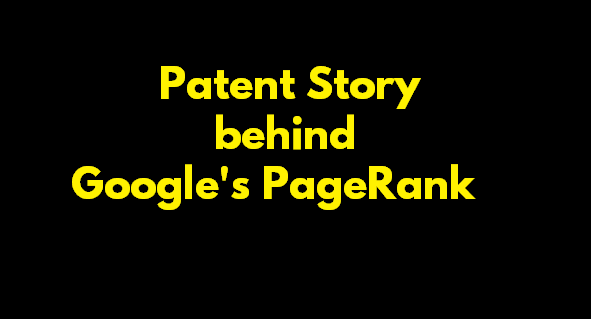 PageRank patent does not belong to Google

Yes, PageRank patent does not belong to Google.

The original PageRank patent was issued in 1999 and was titled "US6285999B1 - Method for node ranking in a linked database". Moreover, the trademark rights of the word "PageRank" are with Google.

The PageRank algorithm was developed by Larry Page when he was a PhD students and was developed under the supervision of Professor Héctor García Molina. The development started in 1996 and was published in 1998.

The legal name of Larry Page is Lawrence Page as in the patent application. Larry Page and Sergey Brin was working on a Web Linking Project at Stanford University as part of their PhD research.

Note: Sergey Brin was not part of the patent but Google was founded by both Larry Page and Sergey Brin with equal rights.

PageRank was influenced by 3 major research works which was also cited by Larry Page:

The rights of PageRank Patent was assigned to Stanford University. This is because PageRank algorithm was developed by Larry Page who was a PhD student at the time

Lesson: If you are an employee, any idea you come up with will be the property of your employer.

Next Patent on PageRank

A modified version of PageRank was patented and is still valid. It was titled "US9165040B1 - Producing a ranking for pages using distances in a web-linked graph".

It was developed by Nissan Hajaj (Google employee) and application was filed in 2006. The rights of this patent on Updated PageRank is valid till 7 July 2027.

This is the short and interesting story behind the Patent of PageRank that is the basis of Google.

Since 2015 the Ultralytics team has been working on improving this model and many versions since then have been released. In this article we will take a look at the fifth version of this algorithm YOLOv5.

In this article, we have explored how to create an Array of structure in C and what is the need of it using a complete C code example.