There are several techniques which can be used to fool any Machine Learning model without having any information regarding the model like model architecture or training dataset. We have explored an influential research regarding this topic.

For adversarial examples to work, prior knowledge of either model internals or its training data. But this paper shows demonstration of an attacker controlling a remotely hosted deep neural network (DNN) with no such knowledge. The strategy involves training a local model to replace the target DNN using inputs synthetically generated by an adversary and labeled by the target DNN. The assumptions involved are that (1) the adversary has no information about the structure or parameters of DNN, and (2) no access to any large training dataset. The adversary can only observe labels assigned by the DNN for selected inputs.

The main aim is to learn a substitute for the target model using a synthetic dataset generated by the adversary and labeled by observing target model output. After that the adversarial examples are generated and the expectations are that the target DNN misclassify them. The strategy involves the following two important steps:

Training a model F approximating Oracle O is a difficult task because there is no prior knowledge of the architecture of the model and also limiting number of queries made to oracle such that the approach is tractable.

Substitute Architecture: The adversary can involve architecture that is basically adapted to input-output relations. That means some knowledge regarding inputs like images, texts etc. and output i.e. classification is known.

Generating synthetic dataset: For synthetic data generation, a heuristic in involved which helps in efficiently exploring the input domain. The heuristic is based on identifying directions in which the model’s output is varying, around the initial set of training points. Such directions intuitively require more input-output pairs to capture the output variations of target DNN O. The heuristic prioritizes these samples in order to get the approximation of the DNN i.e. the substitute. Jacobian matrix of substitute DNN helps in identifying these directions. This is evaluated at several input points x. The adversary evaluates the sign of the Jacobian matrix dimension corresponding to the label assigned to the input x by the oracle:

For getting new synthetic training point a term

is added to the original point x.
This technique is called Jacobian-based Dataset Augmentation.
Substitute DNN Training Algorithm: The algorithm used is: 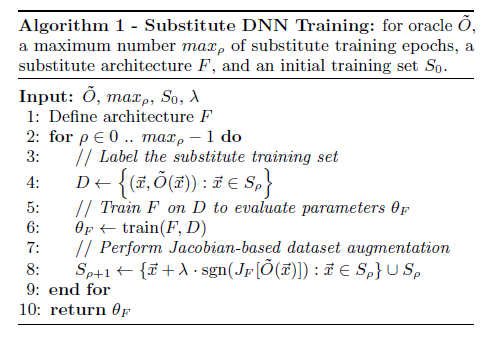 Once the adversary trained a substitute DNN, it uses it to craft adversarial samples.
Two approaches are shown in the paper. These are Goodfellow algorithm and Papernot algorithm.
Goodfellow algorithm: It is also known fast gradient sign method. Given a model F with cost function

, the adversary crafts an adversarial sample

for a given legitimate sample by computing the following perturbation:

Where Jf is model’s Jacobian matrix.
Both of these algorithms evaluate model’s sensitivity to input modifications in order to select a small perturbation achieving misclassification goal.

Validation of the attack

In the paper, the validation of the attack was done against remote and local classifiers. For each classifier details refer the paper mentioned in the beginning. The following observations were made:

Generalization of the attack

All substitutes and oracles are considered learned with the DNNs so far. But part of the attack limits its applicability to other Machine learning techniques. It is possible and proved that the attack was generalized to non-differentiable target oracles like the Decision trees. The limitation was just placed on the substitute. It must model a differentiable function that allows for synthetic data to be generated with the Jacobian matrix.
It was observed that the substitutes can also be learned with logistic regression. The attack generalizes to additional ML models by learning substitutes of 4 classifiers (logistic regression, SVM, decision tree, nearest neighbor) in addition to DNNs, and targeting remote models hosted by Amazon web services and Google cloud Prediction with success rates of 96.19% and 88.94% after 800 queries to train the substitutes.

When it comes to defending against the attacks, there are two types of strategies. One, reactive where on seeks to detect adversarial examples and two, proactive where one makes the model itself more robust.
What is gradient masking?
It is a technique in which a model is constructed in such a way that it does not have useful gradients, e.g. by using nearest neighbor classifier instead if DNN. This type of method makes it difficult to form adversarial examples because of the absence of gradient.
The paper shows that the black-box attack based on transfer learning from substitute model overcomes gradient masking defenses.

In the nutshell, the paper presented a novel substitute algorithm using synthetic data generation to craft the adversarial examples. The assumption was that the adversary was only capable of observing labels assigned by the model to inputs of its choice. The attack was validated on remote and local DNNs and force them to misclassify. Extensive calibration and generalization of the algorithm was performed. The attack evades a category of defenses, which is called gradient masking. Finally, the paper provided an intuition for adversarial sample transferability across DNNs.

With this article at OpenGenus, you must have a complete idea of this influential paper "Practical Black box Attacks against Machine Learning". Enjoy.

In this article, we will introduce you to important DOM concepts by building roll the dice game. This article will be divided into five core sections so that you can follow along.

"if x" and "if x is not None" are not equivalent - the proof can be seen by setting x to an empty list or string. In this article, we have explored the two important concepts namely boolean and none in Python.