Run Length encoding (RLE) is a lossless data compression algorithm, supported by many bitmap file formats, like BMP, TIFF and PCX.
Run Length encoding follows a straightforward logic, it just picks the next unique character and appends the character and it’s count of subsequent occurrences in the encoded string. Runs here refer to the consecutive occurences of the same character. The idea is to reduce the physical total size of repeating characters in the data. 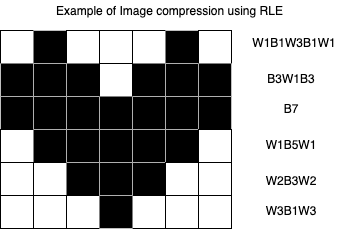 RLE will prove to be ineffective for the following cases:

Let's take the input string as "wwwwbbbwwwwwbbbbb". At each step we identify the next character, count it's subsequent occurences and append the character followed by it's number of occurances to the code.

Even decoding the output is quite straightforward. Whenever you encounter a number, add the character preceeding it that many number of times in your final string.
For example, A3D5G7 gets decoded to AAADDDDDGGGGGGG.

Time Complexity: O(n)
Space Complexity: In the wort case, the algorithm will double the size of the input. Hence space complexity is O(n).

"Bookkeeper of Mississippi is happy"

RLE is which type of compression

With this article at OpenGenus, you must have the complete idea of Run Length Encoding. Enjoy.