Secant Method is a numerical method for solving an equation in one unknown. It is quite similar to Regula falsi method algorithm. One drawback of Newton’s method is that it is necessary to evaluate f´(x) at various points, which may not be practical for some choices of f(x). The secant method avoids this issue by using a finite difference to approximate the derivative. As a result, root of f(x) is approximated by a secant line through two points on the graph of f(x), rather than a tangent line through one point on the graph.

Since a secant line is defined using two points on the graph of f(x), as opposed to a tangent line that requires information at only one point on the graph, it is necessary to choose two initial iterates x0 and x1. Then, as in Newton’s method, the next iterate x2 is then obtained by computing the x-value at which the secant line passing through the points (x0, f(x0)) and (x1, f(x1)) has a y-coordinate of zero. This yields the equation

As you can see above that the equation for new estimate is same as in Regula falsi Mehtod but unlike in regula falsi method we don't check if the inital two estimates statisfy the condition that function sign at both points should be opposite.

For a given function f(x),the Secant Method algorithm works as follows:

Now let's work with an example:

Now, the information required to perform the Secant Method is as follow:

As you can see, it converges to a solution which depends on the tolerance and number of iteration the algorithm performs. 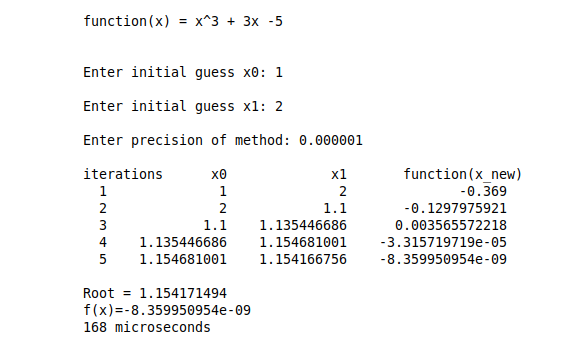 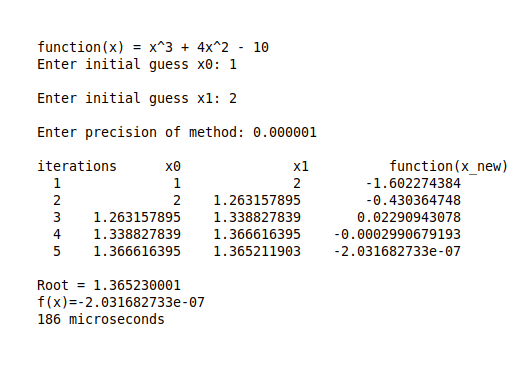 If you notice the examples used in this post are same as the examples in Regula Falsi Method but if you were to check number of iterations required you will notice Secant method being much faster than Regula falsi.

Secant Method is faster when compared to Bisection and Regula Falsi methods as the order of convergence is higher in Secant Method. But there are some drawbacks too as follow:

If you look at the equation for new estimate in Regula Falsi Method and Secant method as follow :

We see that both of them are same. What is the major difference between the two methods?

Regula falsi checks if Intermediate Value Theorem is satisfied
Secant method requires different inputs
regula falsi is not guaranteed to converge
If you look at the algorithms for the two methods the only difference is that Regula Falsi has an additional check for intermediate value theorem i.e. it checks if function value at the two points have opposite sign.

Newton's Method, also known as Newton-Raphson method, named after Isaac Newton and Joseph Raphson, is a popular iterative method to find a good approximation for the root of a real-valued function f(x) = 0.