Let us get started with Single Shot Detector (SSD) + Architecture of SSD.

Single Shot detector the name of the model itself reveals most of the details about the model. Yes, the SSD model detects the object in a single pass over the input image, unlike other models which traverse the image more than once to get an output detection.

As said above the SSD model detects objects in a single pass, which means it saves a lot of time. But at the same time, the SSD model also seems to have amazing accuracy in its detection.

These techniques result in simple end-to-end training and high accuracy even on input images of low resolutions.

The SSD model is made up of 2 parts namely

How does SSD work?

The SSD is based on the use of convolutional networks that produce multiple bounding boxes of various fixed sizes and scores the presence of the object class instance in those boxes, followed by a non-maximum suppression step to produce the final detections

Note: In this model, we will be discussing the SSD built on the VGG-16 network as its backbone model. But the SSD can also be implemented using various other backbone models.

The SSD model works as follows, each input image is divided into grids of various sizes and at each grid, the detection is performed for different classes and different aspect ratios. And a score is assigned to each of these grids that says how well an object matches in that particular grid. And non maximum supression is applied to get the final detection from the set of overlapping detections. This is the basic idea behind the SSD model.

Let's dive into more details on how the objects are detected.

The addition of each extra layer produces a fixed number of predictions using the convolutional filters in them. These additional layers are shown at the top of the model in the given diagram below. For example, a feature layer of size m x n with p channels, the minimal prediction parameter that gives a decent detection is a 3 x 3 x p small kernel. Such kernel gives us the score for a category or a shape offset relative to the default box coordinates.

The default bounding boxes are associated with every feature map cell at the top of the network. These default boxes tile the feature map in a convolutional manner such that the position of each box relative to its corresponding cell is fixed.

For each box out of k at a given location, c class scores are computed and 4 offset relatives to the original default box shape. This results in the total of (c+4)k filters that are applied around each location in the feature map, yielding (c+4)kmn outputs for a feature map of size m x n.

This allows the usage of different default box shapes in several feature maps and makes the model efficiently discretize the space of possible output box shapes.

The You look only once (YOLO) model is a predecessor to the SSD model, it also detects images in a single pass, but it uses two fully connected layers while the SSD uses multiple convolutional layers. The SSD model adds several feature layers to the end of a base network, which predicts the offsets to default boxes of different scales and aspect ratios and their associated scores. 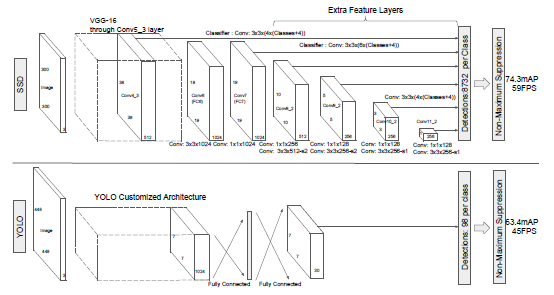 The image compares the SSD model with a YOLO model.

The SSD model is proven to show better results than the previous state-of-the-art detection algorithms like YOLO and Faster R-CNN. The multi-output layers at different resolutions have impacted the performance hugely, in fact, even removal of few layers resulted in a decrease in the accuracy by 12%.

Performance comparison with other models

The SSD model is one of the fastest and efficient object detection models for multiple categories. And it has also opened new doors in the domain of object detection. With this article at OpenGenus, you must have the complete idea of SSD.

If you are interested to learn more about the Single shot multibox detector model feel free to check out the original research paper.

We have explained different Strategies to update Cache in a System such as Cache Aside, Read Through, Write Back and much more. This is an important topic to design efficient system.

We have presented the Architecture of YOLOv3 model along with the changes in YOLOv3 compared to YOLOv1 and YOLOv2, how YOLOv3 maintains its accuracy and much more.