In this article, we have explored how to solve string matching problem (find all occurences of string S1 in another string S2) using Bitset. It is a modification of the naive approach which takes O(L x P x logL) time complexity and assumes all positions to be potential matches and eliminates them based on previous comparisons. The modification with bitset improves the time complexity to O(L x P / K) where L is length of string S2, P is length of string S1 and K is register size.

Bitset is a fixed sized bit array in which every element is a single bit in the memory. Bitset supports all the bitwise operations that are applicable on primitive data types. The operations on bitset are optimally implemented in the libraries.

The operations on bitset has a complexity of O(N / K), where N is the length of the bitset and K is the register size of the system (generally 32 or 64).

String-matching or string-searching is a process used to find the positions (or number of occurrences) in a text where a desired pattern occurs. This can be performed using various data-structures and algorithms. Examples: The prefix array (Knuth-Morris-Pratt algorithm), the trie based finite deterministic automaton (Aho-Corasick algorithm), Suffix automaton and Suffix Tree (Ukkonen's algorithm).

Consider the code for finding all occurrences of pattern in text.

The above algorithm is one of the naive algorithm's for finding all the occurrences of pattern in text.

This algorithm has a worst case time complexity of O(|T| * |P| * log|T|) (|T| is the text length and |P| is the pattern length). Bitset can be used to remove the inner loop and make the algorithm much faster.

String-matching using bitset is similar to the above naive approach with some pre-processing on text.

NOTE: Without loss of generality, it is assumed that the application consists of only lower case English letters.

The computeMask method performs the pre-processing on text. This method essentially creates 26 bitset's (each of length N - maximum length of text + 1), one for each letter in the alphabet. The i th bit in mask[c] is set to 1 only if text[i] is the cth character in the alphabet, otherwise it is 0. Therefore, mask[c] represents all the locations in text which has the character c.

mask[c] >> i is the cth mask left-shifted i times, also c is the ith character in pattern. The left shift is performed to offset the character and overlap with the starting positions of the substring which could be same as pattern. In each iteration i bitwise and is performed between the left-shifted mask and startMask, this unsets all those positions if the character i characters away is not the same as pattern[i]. The unsetting part it done in one shot unlike the naive algorithm, making it much faster.

The above algorithm has a complexity of O(|P| * (|T| / K)), where |P| is the length of the pattern string, and |T| is the length of the text string and K is the register size. This is because, for each character in |P| bitset (length is |T|) shifting and and is performed, whose cost is |T| / K.
The pre-processing time is O(|T|), as mask has to be set for each character in the text string.
Memory usage is O(A * |T|) bits, where A is the number of letters in the alphabet.

Other features of the algorithm

Note: bitset is visualised in reverse order of array for better understanding of bitwise operations

The string as an array and the mask values for character 'a' and 'b' (other characters are ignored because the entire text is made of only a's and b's): 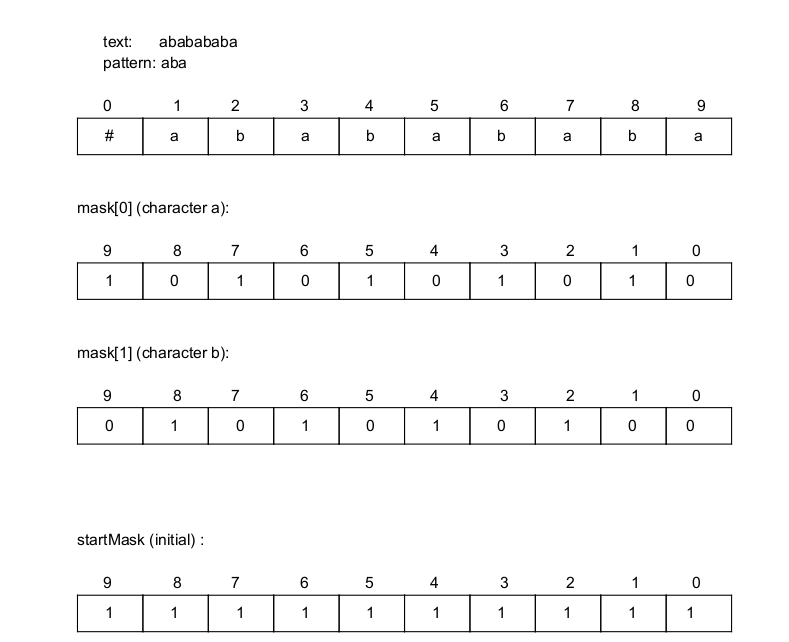 Iterating through the pattern from position 1, the first character in pattern is 'a', whose corresponding position in the mask array is 0. So, mask[0] is shifted left once ('a' should be the first character in the substring) and bitwise and (&) is performed with the startMask. This eliminates positions 1, 3, 5, 7 and 9 because the substrings (of length 1) formed from those starting positions are not 'a' in the original text (without the '#'): 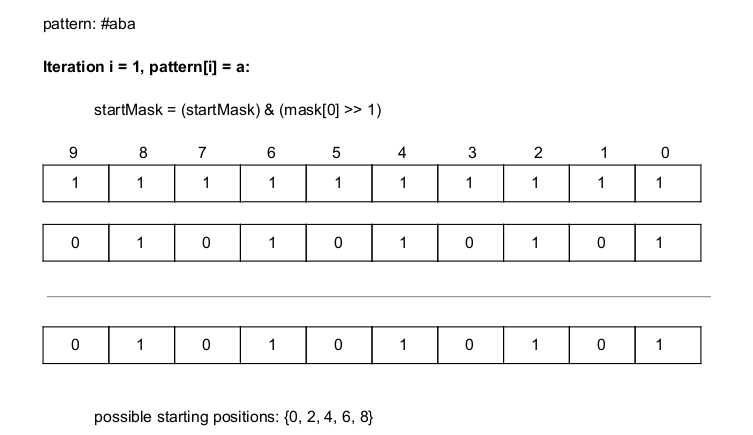 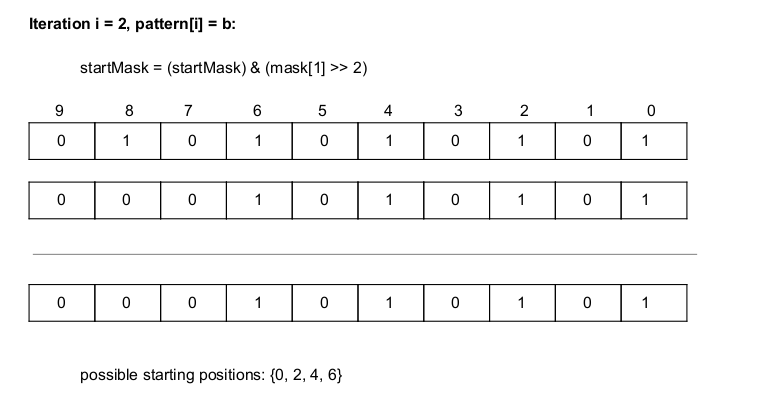 The final character in pattern is 'a' again, so mask[0] is shifted left thrice ('a' should be the third character in the substring) this time and bitwise and (&) is performed with the startMask. This does not eliminate any existing starting position in startMask (positions 0, 2, 4, 6) because the substrings of length 3 formed in the original text at these positions is 'aba'. 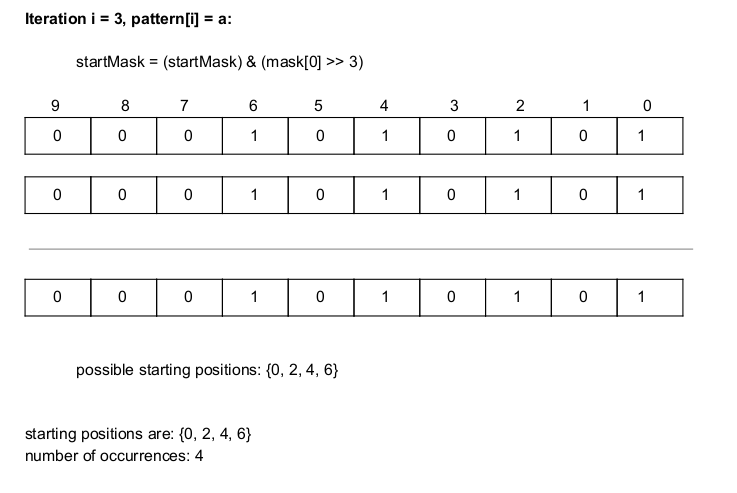 Like any other string matching algorithm, this also has a wide range of applications:

This algorithm is well suited for finding and replacing patterns, as updating a character can be done in constant time.

Finding all strings from a given dictionary in a text

What is the time complexity of a single iteration of the loop in the optimized version?

In optimizedStringMatching function, can the order of pattern iteration be modified to obtain the same result? (Example: from end to begining)

Depends on the text
No
Yes
Depends on the pattern
Yes, because bitwise and (&) operation is associative and the outcome will not change based on the order.

With this article at OpenGenus, you must have the complete idea of solving the string matching problem using bitset. Enjoy.

This is the introduction to recommendation systems, how it works and more. We have different approaches to it like Content-based systems, Collaborative filtering systems and Hybrid systems.

We have explored the concept by utilizing built-in mathematical operations to create our own complex Number utility in Python using Classes (OOP concepts).