We are seeing an unprecedented rise in the use of the recommendation system in various services. Be it Youtube, Amazon, Netflix, advertisement, or an e-commerce site, these systems are unavoidable in our online journey. They aim to predict users' interests and suggest products that they might like according to their interests. Machine Learning approaches are common in Recommendation System.

Why do we need recommendation system?

They give users a lot of options which he or she might not have even discovered yet. It expands the interests of a user by suggesting them new movies, videos, items to buy, etc. So, we can conclude that the recommendation system in one way or another increases the revenue of the company by giving users choices and expanding and exploring the interest of the user which he or she might feel difficult to explore on its own. As they are very important for generating larger revenues, it is very critical in the industry. For example, Netflix organized a challenge where the goal was to produce a better recommendation system which beats their own algorithm with a prize of 1 million dollars.

How does a recommendation system work?

Recommendation system needs to kind of information to function:

In this type of recommendation system, the user’s item, and profile feature are used. It says that if a user got interested in a type of item in the past, he/she will again get interested in the future. For example, if a user likes a comedy movie, then chances are high that he will watch another comedy movie if recommended.

Information about the user is saved in the form of vector i.e., the movies he liked or disliked or the ratings that were given by them and so on. This vector is called the user's profile vector. Information regarding each movie/video/item are stored in another vector which is called an item vector.
The content-based recommendation system algorithm finds the cosine of the angle between the profile vector and item vector, i.e. cosine similarity. For Example, if the profile vector is A and the item vector is B, then the similarity between them can be calculated as:

As cosine values range from -1 to 1, items are arranged in descending order one below the other. Generally, only the top 'n' items are recommended to the user. In some cases, a threshold is set and all items above that threshold are shown to the user. 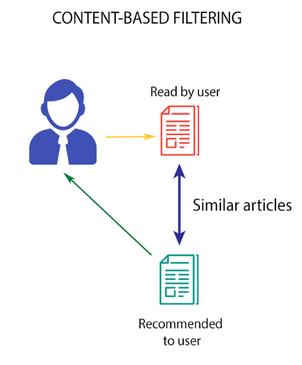 To improve upon this drawback, another algorithm that can recommend items not solely based on the content, but the behavior of users as well.

Let us understand this with an easy example. If person A likes 3 movies, say x,y and z, and person B likes x,y and q, then we can say that these people have similar interests. Hence, we can recommend z to B and q to A.

The diagram below depicts the difference between User-User and Item-Item based recommendation system. 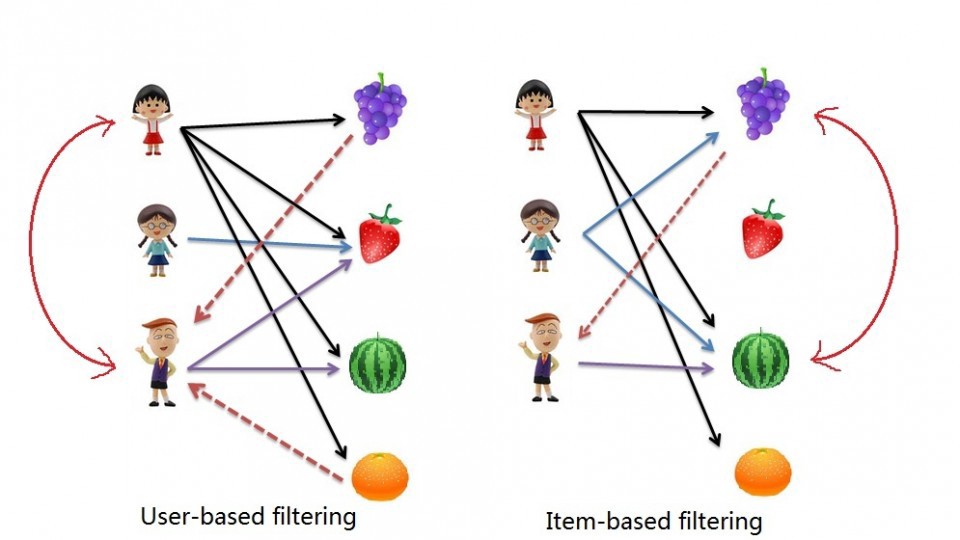 As for any algorithm, there is a need for us to be able to evaluate the performance of our recommender systems. This helps us to decide which algorithm fits best for any specific situation.

With this article at OpenGenus, you must have a strong idea of recommendation systems and how it works. Enjoy.

In this article, we explored how to implement Memory Efficient Applications in Node.JS. We covered topics like buffers, streams, readable streams, writable streams and piping in Node.JS.

In this article, we have explored how to solve string matching problem (find all occurences of string S1 in another string S2) using Bitset. It is a modification of the naive approach which takes O(L x P x logL) time complexity which improves to O(L x P / K) using bitset.