Support vector machines are a popular class of Machine Learning models that were developed in the 1990s. They are capable of both linear and non-linear classification and can also be used for regression and anomaly/outlier detection. They work well for wide class of problems but are generally used for problems with small or medium sized data sets. In this tutorial, we will start off with a simple classifier model and extend and improve it to ultimately arrive at what is referred to a support vector machine (SVM).

A hard margin classifier is a model that uses a hyperplane to completely separate two classes. A hyperplane is a subspace with one less dimension as the ambient space. 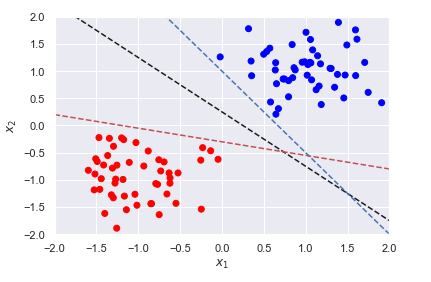 We not only want a classifier that will completely separate both classes but one that is situated an equal distance from the two classes. Such a classifier will likely be a better decision boundary for new data. Our model should not only seek for complete separation of our classes but also create the largest margin between the two classes. To find the classifier that results in the largest margin, we need to first define the equation of a hyperplane and understand how to calculate distances. The equation for a 𝑝 -dimensional hyperplane is

𝛽̃ defines the hyperplane and the set of 𝑥 that satisfies the above equation lie on the plane. Note, both 𝑥 and 𝛽̃ are 𝑝 -dimensional vectors. For our classifier, we require that all points or vectors are on the correct side of the dividing hyperplane. If we enforce the ||𝛽̃ ||=1 , then the result of ||𝑥⋅𝛽̃ +𝛽̃ 0|| will be equal to the distance between the vector and the hyperplane. For our two classes, let's assign a value of ±1 , where 𝑦𝑗=+1 and 𝑦𝑗=−1 are observations above and below the hyperplane, respectively. Under this convention, we seek to find a hyperplane that will satisfy the following criterion for all observations

For a given problem, there could be various hyperplanes that satisfy the above inequality; the three classifiers shown above all satisfy the inequality. We want a classifier that creates the largest possible margin; we will need to include the following constraint,

where 𝑀 is the size of the margin. Remember, the term 𝑥𝑗⋅𝛽̃ +𝛽̃ 0 is the distance between a vector and the hyperplane and we require all vectors are at least 𝑀 distance away. For simplicity, we will define 𝛽≡𝛽̃ /𝑀 and 𝛽0≡𝛽̃ 0/𝑀 which results in ‖𝛽‖2=1/𝑀 . To maximize, the margin, we need to minimize ‖𝛽‖2 . The hyperplane resulting in the largest margin can be solved by 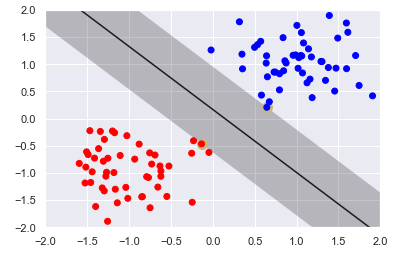 Not all cases is it possible to completely linearly separable the two classes. We need to relax the constraint that there be no margin violations. The result is what is called the soft-margin classifier. As before, we still look to create the largest possible margin but the model will incur a penalty for vectors that reside in the margin or are on the wrong side of the hyperplane. Mathematically, we are going to construct a margin such that

The severity of all the violations are controlled by the hyperparameter 𝐶 and the magnitude of the penalty for each vector is proportional to 𝜁𝑗 . The objective function we want to minimize has two parts, one that seeks for the largest margin and another the aims to reduce penalties from margin violations. Our constrain is slightly different from the hard margin classifier as it needs to consider that vectors may reside inside the margin.
Each vector will have its own value of 𝜁 . If a vector does not reside inside the margin and is on the right side of the hyperplane, then 𝜁=0 and we have the constraint for our hard margin classifier. These vectors will contribute to the cost function we want to minimize. If a vector is inside the margin, then 𝜁 needs to be greater than 0 to still satisfy the constraint. If a vector lies on the hyperplane, then 𝑥𝑗⋅𝛽+𝛽0=0 and 𝜁 must be at least equal to 1 to satisfy the constraint. If the vector is on the wrong side of the hyperplane, then 𝜁 for that vector needs to be greater than 1.

Determining the hyperplane coefficients of the soft margin classifier involves solving a convex quadratic minimization with linear constraints. It can solved using quadratic programming solvers and the time complexity will be 𝑂(𝑛𝑝) . The soft-margin classifier in scikit-learn is available using the svm.LinearSVC class.
The soft margin classifier uses the hinge loss function, named because it resembles a hinge. There is no loss so long as a threshold is not exceeded. Beyond the threshold, the loss ramps up linearly. See the figure below for an illustrations of a hinge loss function. Negative distance means the observation is on the wrong side of the hyperplane. 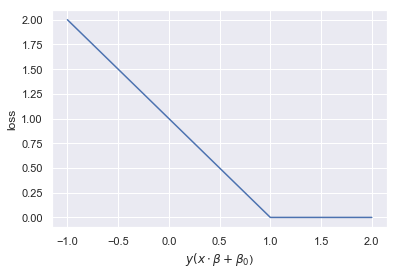 We will train the soft margin classifier on a data set that is not completely linear separable. If you try to run this code on your IDEs ,the interactive visualization allows you to modify the hyperparameter 𝐶 . Consider the effect of increasing and decreasing 𝐶 . Note, for tuning purposes, it's best to use a logarithmic scale. 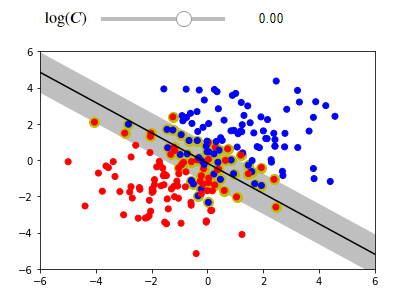 Using a hyperplane to separate the two classes will have limited performance as most problems require a non-linear decision boundary. One approach to overcome this limitation is to engineer non-linear features using the original features. Essentially, we are projecting our data onto a higher dimensional space where a linear classifier will perform substantially better. Consider the example below. 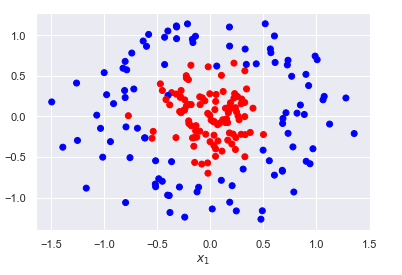 We clearly cannot linearly separate the two classes. However, we can create a new feature

, the distance from the origin. With the new feature, we are projecting our data onto a higher dimensional space. 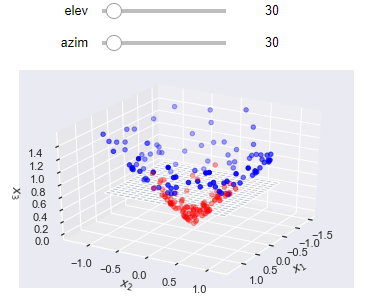 In this higher dimension, it is possible for a hyperplane to adequately divide the two classes. The resulting decision boundary on the original, lower dimensional space, is non-linear.
In the example, we introduced the new non-linear term directly into data set. However, the way the objective function is solved allows us to indirectly applying the projection, using what is called the kernel trick. A kernel is a function that creates the implicit mapping/projection to a higher dimensional space. The advantage of using a kernel trick are:

There are several popular choices of kernels; they are the polynomial, sigmoid, and Gaussian radial basis function (RBF). In scikit-learn, the choice of kernel is controlled by the keyword argument kernel. The table below 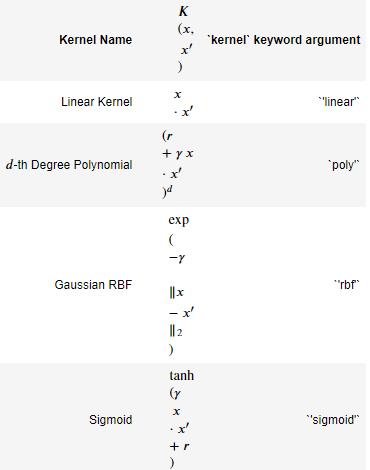 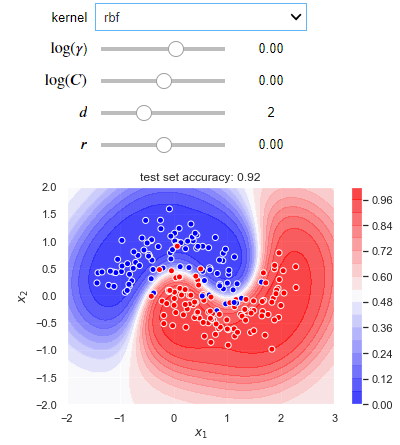 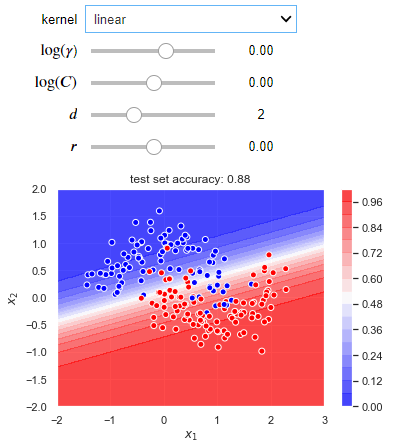 The SVM models resembles that of logistic regression. They are both linear binary classifiers, if we ignore the kernelized version. The difference between the two methods is the cost function they use to determine model parameters. The logistic regression uses the log loss while SVM uses the hinge loss. Both functions are plotted below. 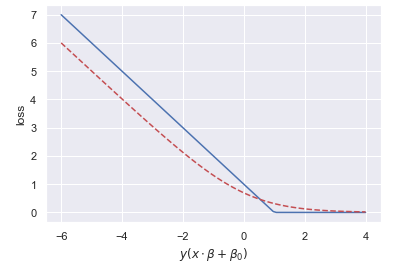 The two cost functions have the same limiting behavior. 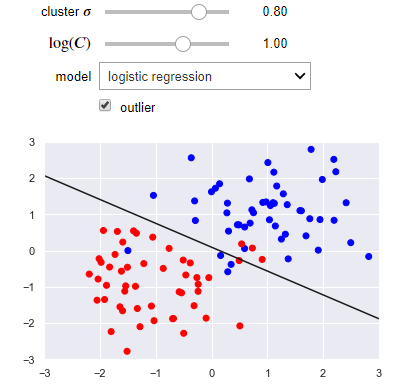 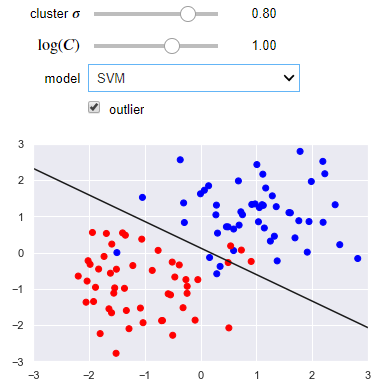 SVMs can be also be used for regression with some modifications to the constrained optimization. Instead of constructing a margin that avoids penalties incurred by vectors residing inside the margin, we train a model that includes as many vectors inside the margin as possible. Now, vectors that are inside the margin carry no penalty but will incur one if they are outside of the margin. Similarly as before, the penalty ramps up linearly the farther away the vector is from the edge of the margin. Instead of a hinge loss, the SVM regressor uses a well-loss cost function, shown below 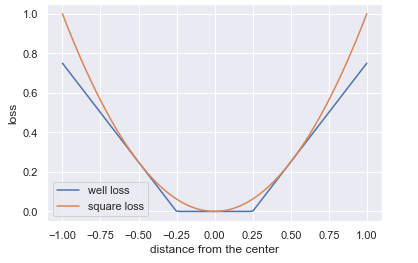 Instead of solving the originally formulated optimization problem, we can reformulate the problem to construct what is called a dual problem. The original formulation is referred to as the primal. We can use Lagrangian multipliers which transforms the constrained minimization problem into an unconstrained problem. Under certain conditions, the solution to solving the dual problem is the same as solving if we had solved the primal. These conditions are met with our original quadratic optimization with linear constraints. Thus, we can either solve the primal or dual problem and get the same result.
The dual formulation of the soft-margin classifier is

Once solved, the coefficients of the hyperplane are

Here, 𝛼𝑗 are the Lagrangian multipliers. Only the vectors that violate the margin have a non-zero value for it's multiplier. Given the equation for calculating the hyperplane coefficients with the multipliers, it becomes clear that only vectors with a non-zero multiplier contribute to the construction of the hyperplane. The mathematics are in agreement to our earlier statement that only the support vectors decides the chosen hyperplane.

where ℎ(𝑥𝑗) is a function that projects the original vectors to the new higher dimensional space. However, if we have a large set of features, the number of new features will become too many, even if we only include terms of degree 2. In the dual formulation, only the result of the dot product of the vectors matter. Instead of expanding the dimensions of our vectors and then taking the dot product, we can pose a function 𝐾 such that

This function is referred to as a kernel. The result of using a kernel on the dot product of the vectors in the original space is mathematically equivalent to explicitly transforming our vector and then taking the dot product. The kernel function is indirectly applying the feature transformation and avoids the creating vectors of very large dimensions. The advantage of solving the problem using the dual formulation is that it allows for the use of the kernel trick. With the kernel, we can now refer to our model as a support vector machine. The kernelized form of the equation we want to minimize is

Solving for the hyperplane coefficients using the dual formulation is 𝑂(𝑛2𝑝) to 𝑂(𝑛3𝑝) . The training time complexity does not scale well with increasing number of observations. Because of training time complexity of SVMs, they are not useful when working with large data set. There is no hard cutoff, but scikit-learn recommends against using a SVM with a data set of more than 100,000 samples. The class svm.SVC provides the kernelized form of the model, solved using the dual formulation.

With this article at OpenGenus, you must have a good idea of Support Vector Machines in Machine Learning. Enjoy.

The problem states that given a number or a score, we need to find the number of ways to reach it using increments of 1 and 2 with a constraint that consecutive 2s aren't allowed. We will solve this using Dynamic Programming in linear time O(N).