In this article, we will go over how do we design a navigation application like Google Maps.

What is Google Maps?

Google Maps is a web-based tool that provides precise knowledge on geographic areas and locations all over the world. Aerial and satellite views of numerous locations are available on Google Maps in addition to traditional road maps. Google Maps provides street views based on images obtained from automobiles in several cities.

Google Maps has undoubtedly made our lives easier. Whether you're looking to discover a new city, plan a road trip, locate the shortest route to the airport, or escape traffic on your way to work, Google Maps can help. Simply key in your destination and you'll be taken to the ideal path. It appears to be really straightforward. However, everything that happens in the background, from inputting your destination to determining your route, is far from easy. So, let's take a closer look at what goes into designing the Google Maps.

The design of Google Maps is one of the most challenging system designs since so many factors must be taken into account when creating such a large system. We'll start with the fundamentals and look at the Google map's primary requirements. 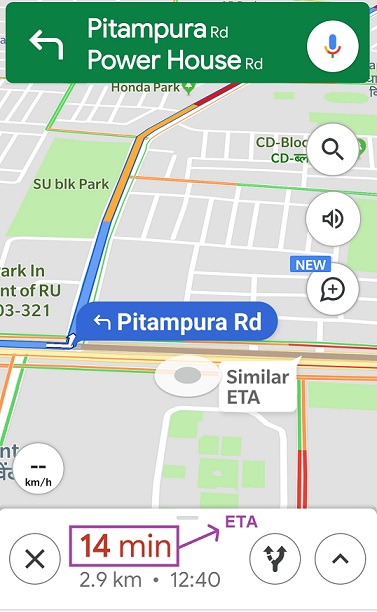 High availability, good accuracy, decent speed, and scalability (up to 1 billion active users per month and 5 million business users) are some of the additional requirements. Weather conditions, road quality, accidents, and roadblocks should all be considered when calculating the ETA.

The estimated arrival time should not differ significantly from the actual arrival time. This system should never fail. We don't want our consumers to become disoriented. Because a service like Google Maps generates a large number of requests per second, it must be structured in such a way that it can manage these demands as well as any spikes in demand.

Finally, the purpose is to discover an efficient path between two spots.

Consider the following scenario. We want to find the distance between locations A and B on our map. One obvious answer is that each unique point on the map has a unique longitude and latitude value, therefore we can use any technique to calculate the distance between two locations, i.e. source and destination. However, this approach will not work in the real world because the application will be used by millions of users and there are billions of different routes present around the world, and the users will be using these roads at the same time, so these mathematical computations will not work in the real world.

One possible option is to cache all distances and ETAs between significant junctions and use them as needed. However, in this situation as well, a massive cache will be required to hold the distance and ETA information between significant intersections. Also, amid traffic, the ETA changes every ten minutes, making it hard to store. If a new route between source and destination is constructed, the map must discover an efficient path and update the route if the user deviates. We'll go over each of these issues one by one.

Assume that we need to discover the best path between two spots in our scaled map. We may currently disregard elements such as traffic, weather, and so on. The quad-tree approach is used for this. In scenarios where we need to determine the time or distance between two locations on a map, we employ quad-tree. The root of the quad-tree symbolizes the global map, while all of the branches represent distinct areas. So, basically, the world map is broken into sub-regions until we reach a specified region, such as one with length and width of one kilometer. This area is recognized as the quad-tree leaf. 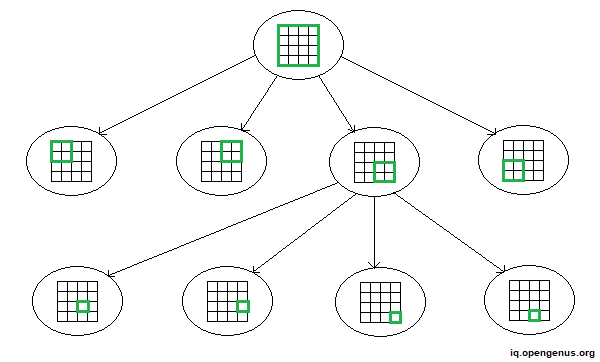 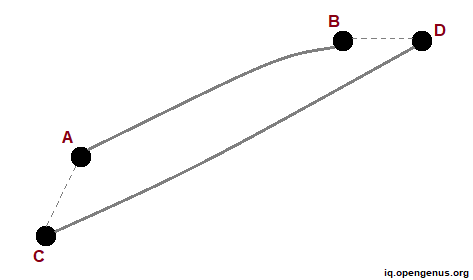 To summarize, if we need to find the distance between two places, we may utilize distance algorithms as well as data from cache.

Now what if the user wishes to go from one region to another? We'll utilize what's known as entrance and exit points (denoted by red dots). There are specific places of entry and exit between two regions or leaves. We compute and save the distance between these two points. We may then utilize this distance to determine the most effective path. 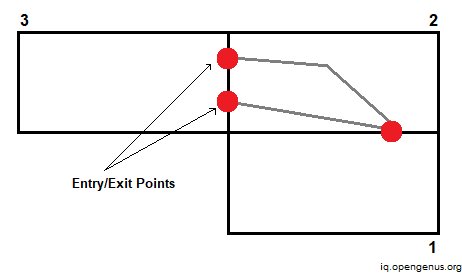 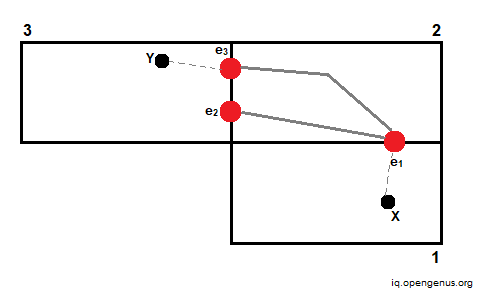 What about ETA now? The ETA is difficult to determine since it is influenced by a variety of factors. We must consider traffic, weather conditions, crowded places, and other factors when calculating the ETA between two sites on a map. One way is to collect real-time data from various users and then compute ETA based on it. Consider computing ETA between two points. We leverage user data to compute standard deviations, analytics, and so on to generate an approximate ETA between the provided places.

We must display quantifiable data on the map. As a result, we generate a table in which we calculate the ETA. The traffic is represented by this table. Assume we compute the ETA between locations P and Q to be 60 minutes. Because the journey takes a long time, it will be indicated in red. Similarly, we may color-code different routes based on the value of ETA. In this way, we can quantify our data and plot it on a map.

Let's have a look at which services are involved in our system.

In our design, we will make advantage of all of the services mentioned above. 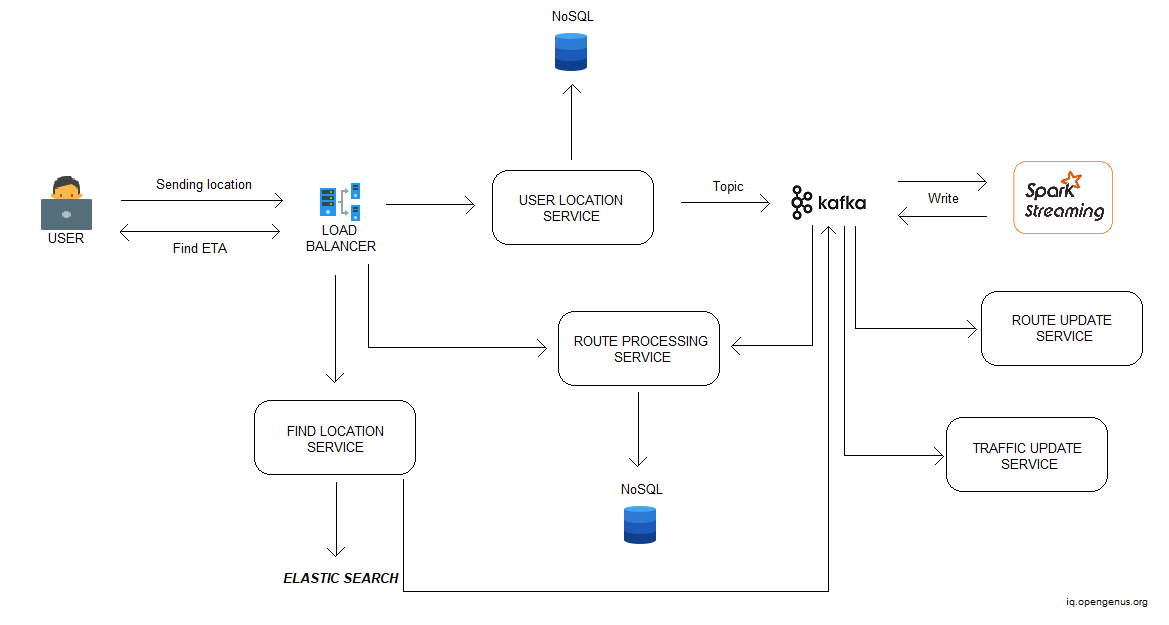 The user is utilizing a device such as a cell phone to access the map service. The application sends the user's location to the load balancer on a constant basis.

The information will then be sent to the service (User Location Service) via the load balancer. This service will profile users and update all of their information in the database (like Cassandra or MongoDB).

Now, the User Location Service will transmit that information to a specific topic in Kafka, and then to spark streaming, which will read that data. This module is in charge of all analytics. Spark streaming is used to analyze live data streams in a scalable, high-throughput, and fault-tolerant manner. It computes using complicated algorithms. If a user asks an ETA, the computation is performed using spark streaming using data contained in the database.

When the data is processed in this module, it may then send the processed data to a distributed file system such as Hadoop and apply machine learning techniques to it. We may also return the data and write it to a specific topic in Kafka. The data is then read by the Route Update Service and the Traffic Update Service.

Let's look at another scenario. Assume the user searches the map for the ETA between his current position and a desired destination. This request will also be sent to the load balancer, which will forward it to the Find Location Service. Using elastic search, this service will retrieve the destination's longitude and latitude. This data will then be pushed to the Kafka queue for further processing. All computations are then performed using the Route Processing Service and the latitude and longitude. It returns to the user the optimum route.

In the situation of disputed territories, the system displays a different map depending on the nation from which you are coming.

Kafka - Kafka is a distributed publish-subscribe messaging system designed to be a quick, scalable, and long-lasting replacement for existing alternatives. It's made to handle massive message streams on cloud platforms for extremely low-latency analysis. It's very helpful when working with real-time data. Kafka maintains track of message feeds inside topics. Producers produce the data inside the topics, which are then consumed by consumers. Kafka is used over other alternatives like RabbitMQ, ActiveMQ, etc. because it is highly scalable, long-lasting, and dependable, with excellent performance.

Spark Streaming - Spark Streaming is a feature of the Spark API that allows data engineers and scientists to handle real-time data via Kafka, Flume, and Amazon Kinesis (Kafka in our case).

Spark Streaming's quick acceptance is due to the convergence of heterogeneous data processing capabilities. It allows developers to utilize a single framework to meet all of their processing needs. They can train models offline and then use them to score live data in Spark Streaming using Spark's machine learning framework.

NoSQL - A non-relational, distributed, flexible, and scalable database is known as a NoSQL database. The lack of a database schema, data clustering, replication support, and eventual consistency, as opposed to the conventional ACID (atomicity, consistency, isolation, and durability) transaction consistency of relational and SQL databases, are all frequent NoSQL database properties.

Cassandra - Cassandra is a distributed database management system designed to handle enormous volumes of data dispersed over numerous data centers and the cloud. It features a high scalability, high availability, and no single point of failure, which makes it unique. The User Location Service will profile users and update the Cassandra database with all of their information.

Hadoop - Hadoop is an open source platform for storing and processing huge datasets with sizes ranging from gigabytes to petabytes of data. Hadoop allows clustering multiple computers to analyze massive datasets in parallel, rather than using a single large computer to store and process the data. Because it was built to duplicate data across numerous nodes, Hadoop is extremely fault-tolerant. Each file is divided into blocks and copied many times across multiple machines, guaranteeing that the file can be recreated from other blocks if one system fails. Its high speed is what makes it popular. Google map sends its processed data to Hadoop for further analysis.

Elastic Search - Elastic Stack is a combination of software packages that can take and store data in any format and conduct search, analysis, and visualization in milliseconds or less. The Elastic Stack is built for developers to utilize directly to power a range of use cases. Humans produce 2.5 quintillion bytes of data per day, and an individual generates 1.7MB of data in a second, according to data. It is now a data-driven world. As a result, we require a system that analyses our data. There are two terms to be aware of:

We also need to keep track of zoom levels. Assuming a zoom factor of 3.3, we must compute picture data at the following scale:

Managing 300,000 database nodes might quickly result in disaster. So, instead of depending just on horizontal scaling, we may also employ some vertical scaling. Let's look at how much memory a 64-bit system can address theoretically.

Thus, a 64-bit system may theoretically address 16 EBs of space and host all 1500 PBs of data on a single machine. In practice, however, computers with such large amounts of memory become prohibitively costly. So we don't know how to escape this problem of 300,000 servers, and to continue our investigation, we'd suppose that such a large number of servers are truly in operation.

This is how Google Maps' end-to-end processing works. With this article at OpenGenus, you must have the complete idea of System Design of Google Maps.

CI/CD is all about automating the software development process so that changes can be made quickly and easily without compiling and testing code manually.

In this article we discuss semaphores and how they are used in interprocess communication in Linux.