We use the vmstat command for system performance monitoring in Linux. It reports statistics about threads, system calls, CPU activity, memory, disks, and more.
We look at commonly used vmstat commands.

We use the vmstat command to monitor system performance in Linux. With it, we get statistics about threads, virtual memory, processor activity, disk utilization, and more. We discuss commonly used vmstat commands and analyze their output.

On CentOS and RHEL:

On Debian and Ubuntu:

We write vmstat command in the following format:

To make sure vmstat was successfully installed we can execute it without any command options and analyze its output:

From the output we have 6 columns:

We define active memory as the memory that is currently being used by a running process while inactive memory is that that is allocated to a sleeping or inactive process.

To view active memory we use the -a option:

Notice in the output that the buff and cache columns are replaced with inact and active columns listing inactive and active memory.

To list scheduling statistics we use the -s option:

From the output we have the following sections:

For example, to list the number of forks since the host was booted, we write:

The -D option is used to print out a summary of the statistics involving a disk: 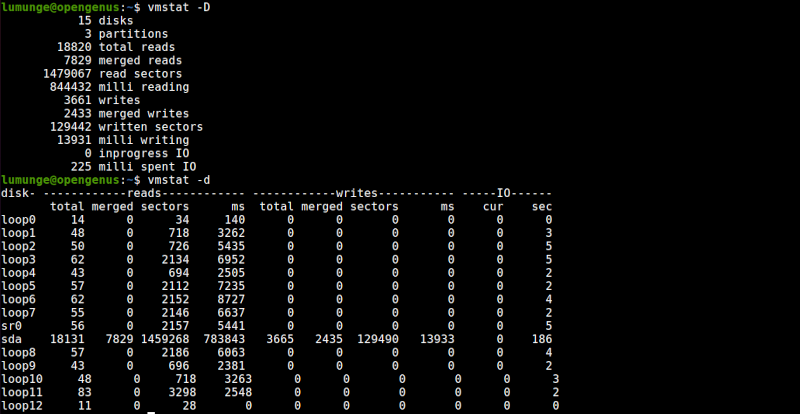 The -d option on the other hand gets us detailed statistics on a disk.:

From the output of the above command we have four columns:

The first lists the disk.

To print out statistics about a single partition we use the -p option:

The -t option prints output along with its timestamps:

A slab is a set of contiguous pages of memory set aside by a slab allocator for an individual cache. Slab allocation efficiently allocates memory to various data objects that are handled by the Linux kernel.

We can view slab statistics using the -m option with vmstat:

From the output we have the following columns:

We can also list output in a human-readable format. The default sizes are listed in kilobytes to change it to megabytes we use the -S option followed by M standing for 1048576 bytes:

System statistics change frequently, to view statistics at specific time intervals we use the -t option followed by the number of seconds. For example, to vmstat output every two seconds we write:

We can cancel this by pressing CTRL+C.

We can also specify a count value so that vmstat can know how many updates to perform before it exits. For example to update every 5 seconds 3 times we write:

Now the updates will stop automatically after three are done.

Linux apart from using RAM to manage memory also uses space on the disk - swap space to help manage this application memory as if it is an extension of RAM. This is what we call virtual memory. We use the vmstat command to monitor all things involving virtual memory, cpu, and disk. From the kernel writing memory into swap space to free it for another process, to the reads and writes to the disk.

For the manual page for vmstat command, we write: $ man vmstat.

ufw (Uncomplicated Firewall) is a Linux utility that runs on top of iptables used to manage netfilter and managing the firewall. We look at ufw in Ubuntu and how to manage the firewall.

In this article, we have covered YOLOR model architecture in depth and compared it with other YOLO variants like YOLOv4.