In this article, we will be exploring a paper titles “Transferability in Machine Learning: from Phenomena to Black-Box Attacks using Adversarial Samples” by Nicolas Papernot, Patric McDaniel and Ian Goodfellow. The paper talks about what adversarial machine learning is and what transferability attacks are. The authors have also presented experimental details on some popular classification systems and have demonstrated adversarial sample transferability. In the end, adversarial crafting techniques are discussed.

In this world, there are many fields where machine learning is thriving. Development of technology is taking place at a very fast rate. We can see the application of machine learning algorithms in many places. But it has been proved that machine learning algorithms are vulnerable to adversarial samples. Attacks using such samples basically exploits imperfections and approximations made by learning algorithms.
What is Adversarial sample transferability?
It is the property by which some adversarial sample, that was created to fool or exploit a model is also capable of misleading another model even if the two models have quite different architecture.
In this paper, the authors were able to develop and validate a generalized algorithm for black box attacks that exploit adversarial sample transferability on broad classes of machine learning like DNNs, logistic regression, SVM etc. The contributions of authors in this paper are summarized below:
-The paper shows adversarial sample crafting technique for SVM and decision trees models.
-The paper studies the sample transferability pattern. The models with same ML technique have large sample transfer.
-The paper generalizes the learning of substitute models from deep learning to logistic regression and support vector machines. Another thing shown in the paper is that it is possible to learn substitute matching labels produced by many ML models like DNN, LR etc. at rates superior to 80%.
-The authors conducted attacks against famous classifiers hosted by Amazon and Google. The details can be referred in the paper.

In this section, we will be discussing the author’s approach towards adversarial sample transferability.
To mislead a model f, solving the following optimization problem will help us get the required adversarial sample:

Set X- representative of the expected input distribution for the task solved by model f and f’. Now, the adversarial sample transferability can be partitioned into two variants-

In this section, we will be briefly discussing the transfer techniques on different machine learning algorithms. For complete experimental details, please refer Section 3 of the paper.
Hypothesis 1 has been used for this study here. The author have explored 5 machine learning algorithms that include DNNs, LR, SVMs, DTs and kNNs. MNIST dataset of handwritten digits has been used for the experimental setup.
For model selection was done using features shown below:

DNNs- for state-of-the-art performance
LR- for its simplicity
SVMs- for their potential robustness
DTs- for their non-differentiability
kNNs- for being lazy-classification models.
Rest of the details can be seen in the paper itself.
Results of experiment

To generate or craft samples that are misclassified by a classifier whose details and structure is unknown, substitute model can be used for that. The substitute model solves the same classification problem and its parameters are known.

Here, the targeted classifier is called oracle as the adversary have the minimal capability of querying it for prediction in inputs of their choice. Only the labels are returned by the oracle. No other details. To overcome this problem, certain data augmentation techniques are used.
Jacobian-based dataset augmentation: This technique is used to learn DNN and LR substitutes. Following steps are involved in this. First, the data is collected. After that, data is labelled by obtaining labels from the oracle. Now, this trained data is used to train the substitute model f. To improve the performance of this model, the following equation is used:

S(p+1): new training set
S(p): previous training set
Lambda(p): a parameter fine-tuning the augmentation step size
J(f): jacobian matrix of substitute
O(x): oracle’s label for sample x
After obtaining the new set S(p+1), the model f is trained using that.
Periodical Step Size: It was shown in the paper that instead of keeping a fixed step size parameter, it will be helpful if the value of this parameter is alternating between positive and negative values. The following equation is used for this: 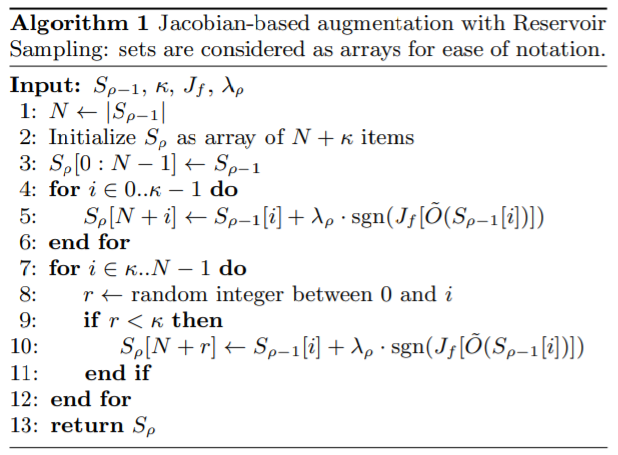 Now let us briefly talk about some machine learning algorithms substitutes. For complete configurations and parameter details, please refer the paper itself.

The author trained 5 different substitute DNNs to match the labels produced by 5 different oracles, one for each ML technique. MNIST dataset was used. Consider the result plot below: 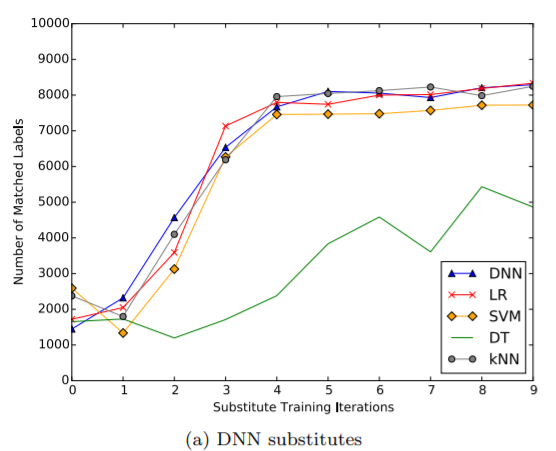 This graph plots at each iteration p the share of samples on which the substitute DNNs agree with predictions made by the classifier oracle they are approximating.

Jacobian-based dataset augmentation is also applicable to multi-class logistic regression. The (i,j) jacobian component of this model can be calculated as follows:

Resultant plot for Logistic regression is shown below: 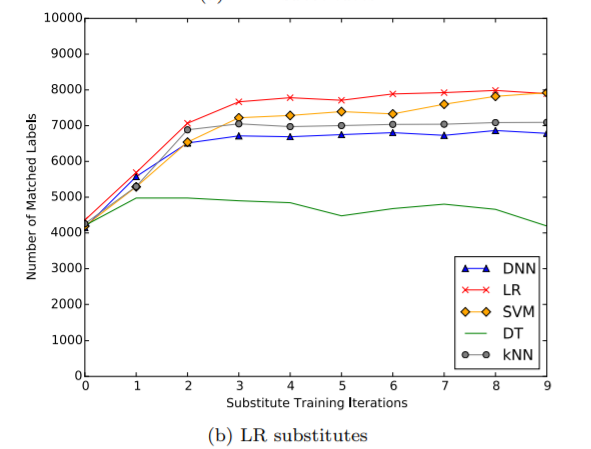 Now, the impact of refinements i.e. Periodic Step Size(PSS) and Reservoir Sampling(RS) on DNN and LR can be summarized in the table below:

SVM-based dataset augmentation is used to train SVMs to approximate oracles. The following equation is used:

The attack method includes locally training a substitute. The authors preferred the use of DNNs and LRs for the substitutes. The two refinements were also applied i.e. Periodical step size and reservoir sampling. The authors targeted two models hosted by Amazon and Google. Step by step details for these attacks are presented in the paper.
1. Amazon Web Services: The model was trained using Amazon machine learning which is provided as a part of Amazon Web Services platform. The table below shows the results obtained:

2. Google Cloud Prediction Oracle: The procedure to train model on Google is similar to Amazon. The results obtained are as follows:

The methods used in the paper for crafting adversarial samples are discussed next:

So what we have learnt is that the adversary can even attack models whose model and parameter knowledge is not known. We also saw that, samples crafted for a model f, and even misclassified by model f’, where the sample may or may not be using the same machine learning algorithm. There were also details regarding substitutes that can be used for misclassification. Finally, for different machine learning algorithms crafting methods were explored.

We answer the question "Can Machine Learning (ML) or Artificial Intelligence (AI) be secure?". We explore different types of attacks on Machine learning, defense strategies and more