In this article, we have explored the architecture of a Densely Connected CNN (DenseNet-121) and how it differs from that of a standard CNN. An overview of CNNs and its basic operations can be found here.

In short, DenseNet-121 has the following layers:

We will dive deeper.

However, as the number of layers in the CNN increase, i.e. as they get deeper, the 'vanishing gradient' problem arises. This means that as the path for information from the input to the output layers increases, it can cause certain information to 'vanish' or get lost which reduces the ability of the network to train effectively.

DenseNets resolve this problem by modifying the standard CNN architecture and simplifying the connectivity pattern between layers. In a DenseNet architecture, each layer is connected directly with every other layer, hence the name Densely Connected Convolutional Network. For 'L' layers, there are L(L+1)/2 direct connections. 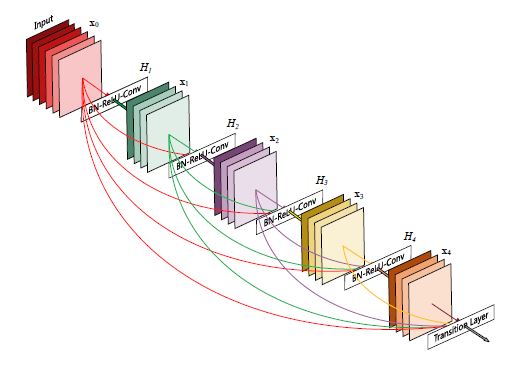 Components of DenseNet include:

In each layer, the feature maps of all the previous layers are not summed, but concatenated and used as inputs. Consequently, DenseNets require fewer parameters than an equivalent traditional CNN, and this allows for feature reuse as redundant feature maps are discarded. So, the lth layer receives the feature-maps of all preceding layers, x0,...,xl-1, as input:

where [x0,x1,...,xl-1] is the concatenation of the feature-maps, i.e. the output produced in all the layers preceding l (0,...,l-1). The multiple inputs of Hl are concatenated into a single tensor to ease implementation.

The use of the concatenation operation is not feasible when the size of feature maps changes. However, an essential part of CNNs is the down-sampling of layers which reduces the size of feature-maps through dimensionality reduction to gain higher computation speeds.

To enable this, DenseNets are divided into DenseBlocks, where the dimensions of the feature maps remains constant within a block, but the number of filters between them is changed. The layers between the blocks are called Transition Layers which reduce the the number of channels to half of that of the existing channels.

For each layer, from the equation above, Hl is defined as a composite function which applies three consecutive operations: batch normalization (BN), a rectified linear unit (ReLU) and a convolution (Conv).

input feature-maps, where k0 is the number of channels in the input layer. Unlike existing network architectures, DenseNets can have very narrow layers.

Although each layer only produces k output feature-maps, the number of inputs can be quite high, especially for further layers. Thus, a 1x1 convolution layer can be introduced as a bottleneck layer before each 3x3 convolution to improve the efficiency and speed of computations.

A summarization of the various architectures implemented for the ImageNet database have been provided in the table above. Stride is the number of pixels shifts over the input matrix. A stride of 'n' (default value being 1), indicates that the filters are moved 'n' pixels at a time.

Using the DenseNet-121 architecture to understand the table, we can see that every dense block has varying number of layers (repetitions) featuring two convolutions each; a 1x1 sized kernel as the bottleneck layer and 3x3 kernel to perform the convolution operation.

Also, each transition layer has a 1x1 convolutional layer and a 2x2 average pooling layer with a stride of 2. Thus, the layers present are as follows:

Therefore, DenseNet-121 has the following layers:

All layers i.e. those within the same dense block and transition layers, spread their weights over multiple inputs which allows deeper layers to use features extracted early on.

Also, even though the weights of the entire dense block are used by the final layers, there still may be more high level features generated deeper into the model as there seemed to be a higher concentration towards final feature maps in experiments.

As DenseNets require fewer parameters and allow feature reuse, they result in more compact models and have achieved state-of-the-art performances and better results across competitive datasets, as compared to their standard CNN or ResNet counterparts.

We hope this article at OpenGenus proved useful to you in learning about the DenseNet architecture:)

This article discusses on a way in which, Binary Search Tree (BST) can be reconstructed when corresponding pre-order traversal of the tree is input, using a concept of monotonic stack.

We have taken an in-depth look at the operations or algorithms that have a constant time in terms of asymptotic notation of time complexities. Is O(1) really a practical way of representing the time complexity of certain algorithms/ operations?