Binary heaps are also commonly employed in the heapsort sorting algorithm, which is an in-place algorithm because binary heaps can be implemented as an implicit data structure, storing keys in an array and using their relative positions within that array to represent child-parent relationships.

A Binary tree is a Binary heap data structure when following two properties are satisfied:

There are two ways to implement heap data structures. 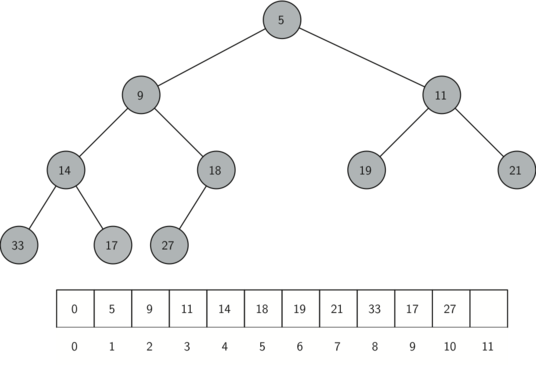 Defining a class of BinaryHeap. Constructors will initilize a list and an attributre currentSize which keeps track of current size of the heap. Empty Binary heap has single zero as its first element, as it makes our simple integer divisions easier. 0 is never used in our code.

We can simply append the new element at the end of our list using python function called by the same name. But appending at the end violates the properties of a binary heap for that we should define a function which could restore the min-heap property by comparing the newly added element with its parent. If parent is greater than our new node then swap these 2 nodes, repeat this step till the root node is the smallest node. 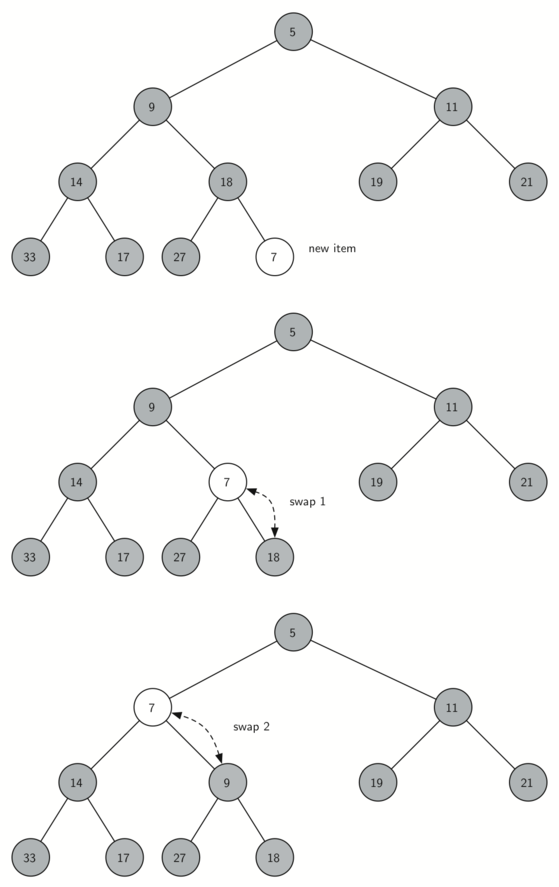 Let's define another function for step no 3.

def Up
We named it up because this function is percolating up from the bottom. We are checking the conditions with parents that is gradually going up the tree

while i // 2 is just a condition to check if the parent node exist or not. Condition i false if i // 2 = 0.
Then we compare the new element with its parent node by calling parent function returning index of parent node.
Using basic Swapping with an extra variable method we will swap the elements if condition is true.
Then we update the value of i to its parent.

Deleting a root in Binary Heap

Deletion in a binary heap tree can be done by swapping the last node with the root node to be removed and then performing some operations to restore the property of our Min heap tree.

For eg if we want to delete root node of our tree.

For deleting 5 from our tree we bring the last node at the root and then checking if the root node is less than its left child, if its less condition is satisfied. If not then swap with its child and perform this till its a Binary min heap tree.

Here, we have to find minimum element among the two children, and then percolating down to check conditions and swapping.
We will define 2 new functions down, minChild, Down
Down function is just the opposite of Up function where we are percolating Down instead of Up, checking the conditions with children.

We are checking if children exist. If it does then call minChild function to return the minimum element among the 2.

check if parent > minChild, if it does then swap with minChild. Repeat this process again and again till it is a binary heap tree.
minchild first check if left < right return left child and vice a versa.

We will now look at how to construct entire Min-Heap tree from the given list of keys.
Following figure shows the steps for building the tree.

We start from the middle and work our way back toward the root node using Down method. This method will ensure that the largest node is pushed as low as it can go, completing the properties of a binary Min-Heap tree.
In our case, we start from the middle node 6, checking which the minimum among 2 and 3. If 6 > 2 we swap to bring 2 in place of 6. Now, i is decremented by 1, now comparing 9 with 2 and swapping to ensure 9 is at the lower most level.

With this article at OpenGenus, you must have the complete idea of Binary Heap.

Deep Learning has become quite a buzzword in recent years. It has taken over in all applications from tasks like image recognition, chatbots like Alexa and Google Assistant to defeating world champions in a complex games like Go and Dota 2.

In this article, we will discuss about the Worst Case Time Complexity about 'Quick-Sort' algorithm along with the complete time complexity analysis of the worst case.