The command pattern is a behavioral-based design pattern that encapsulates a request/action in an object without knowing the internal operations.

Take for instance, the typical programs we wrote when we coded our first programs. Often times we would use a bunch of branch statements to perform such actions.

The main issue is that other classes that use the Calculator object will need to know the calculator commands which creates tightly coupled code while exposing the implementation of the Caclulator class.

Futhermore, what if we wanted to undo actions that we did with our calculator? Or perhaps we wanted to put these action requests into a queue to be performed later? Surely it is possible to do but it would be rather messy to implement and probably more difficult to understand.

This is where the command pattern comes in handy to help solve these problems that were previously mentioned. 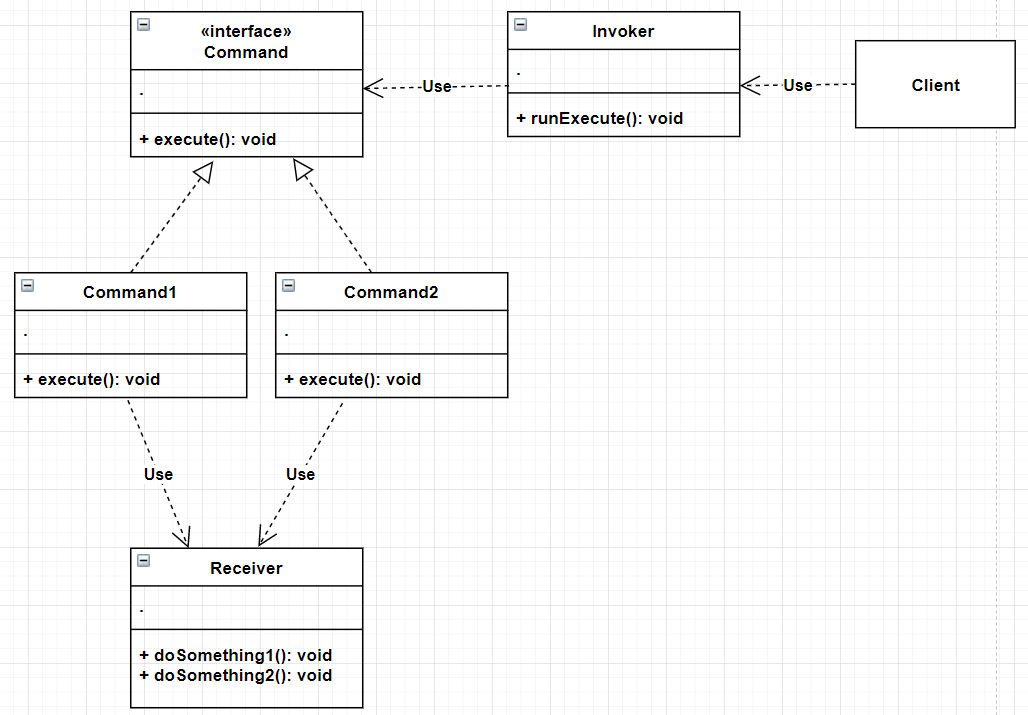 The general command pattern structure is comprised of 5 components. The names may vary depending on the person, but they serve their purpose.

The following is a simple and realistic use of the command pattern implemented.

The ElectronicDoor class is considered as the receiver where all the concrete command classes will use the receiver to invoke methods.This class will be encapsulated by the commands invoking the methods from this class.

It's important to note that all the inner details of how it's implemented goes into this class.

The command pattern uses an interface known as the command. The command interface provides methods which the concrete command classes will implement.

If you need the undo/redo functionality, simply add the methods in the command interface.

The concrete command class will typically call on one of the receivers methods. In this case, the receiver is the ElectronicDoor class.

The concrete command classes are rather simplistic but they provide interfacing with the receiver class. The classes are generally supposed to be simple which makes it very easy to debug due to being simple.

Note: It is very standard to name classes after the design pattern you are using as this helps indicate intention along with improving readability in code and meaningful naming.
ex: LockDoorCommand, OpenDoorCommand, ShowDoorStatusCommand

The invoker is the class that the client will use to invoke all the requests.

The client is mainly to simulate the application.

The output shown represents the commands that were taken in order of execution.

The command pattern is particularly used in certain situtions mentioned below:

With this article at OpenGenus, you must have the complete idea of Command Pattern in Java. Enjoy.

We are given a sorted array which might have duplicate elements, our task is to find the minimum number of increment (by 1) operations needed to make the elements of an array unique. We have solved this using two approaches one using two pointers and other using hashmap.

This is a step by step guide to build a static site using Gatsby. Gatsby is React based, GraphQL powered static website generator. It combines best of React, GraphQL, and Webpack.