1. What is Contrast and Contrast Enhancement?

Contrast refers to the amount of differentiation that is there between the various image features. Images having a higher contrast level generally display a greater degree of color or gray-scale variation than those of lower contrast.

A Cumulative Distribution Function(CDF) of a histogram is the fraction of pixels in with an pixel value is less than or equal to the specified pixel value. 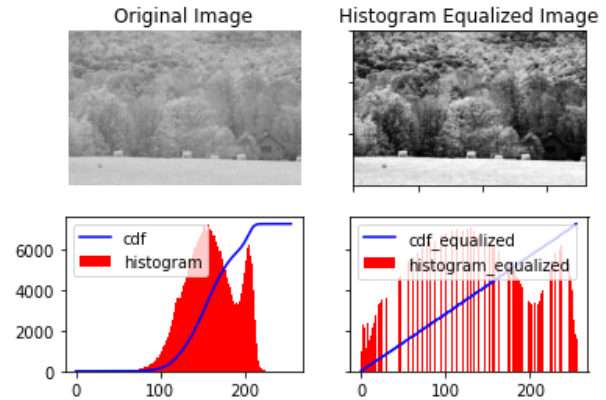 Contrast Enhancement of a Black and White image is fairly straight forward. Histogram Equalization of color images is a little complicated. OpenCV loads color images in BGR (Blue Green Red) color space. In BGR, it is not possible to perform histogram equalization without affecting the color information as all channels contain color information, therefore we have to convert the BGR image into YCrCb.
In YCrCb (Luminance; Chroma: Blue; Chroma: Red) color space, the Y channel of the image only contains intensity information where as Cr and Cb channels contain all the color information of the image. The operation mus tbe performed only only on the Y channel to get the Histogram Equalized output without changing any color related details.

The image before and after Histogram Equalization are shown below: 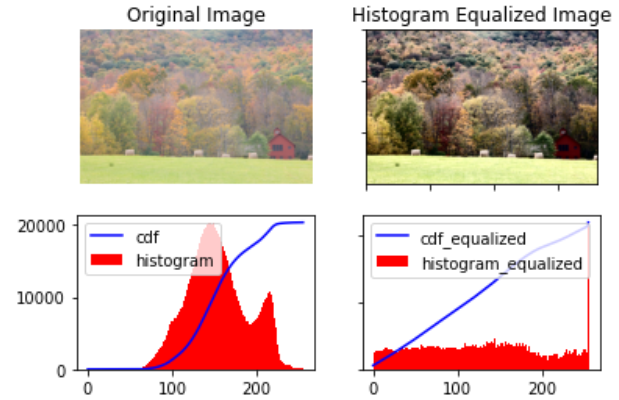 The image before and after CLAHE are shown below: 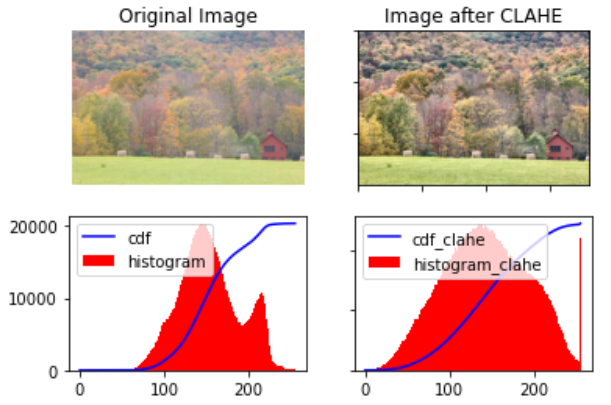 In Contrast Stretching the contrast in an image is stretched from the range of intensity values it contains to span a desired range of values.It is also called Normalization.

In Min-Max Contrast Stretching for each pixel:

Where min and max are the maximum and minimum pixel values in the image.

Below shown is an image before and after Min-Max Contrast Stretching: 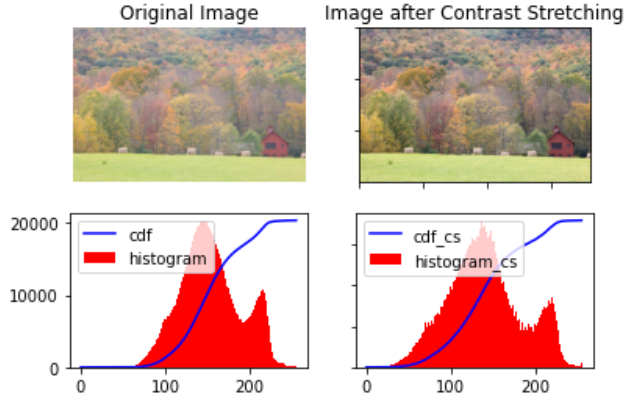 Histogram Equalization of a Black and White Image is fairly straight forward, and can be done using the hist_equalized function of OpenCV.

Applying Histogram Equalization, and generating histograms and CDFs of the equalized image

All of the other steps such as importing, creation of Histograms and CDFs, and application to just the Y channel in color images is the same in CLAHE as in Histogram Equalization the steps that vary are mentioned below:

All of the other steps such as importing, creation of Histograms and CDFs, and application to just the Y channel in color images is the same in CLAHE as in Histogram Equalization the steps that vary are mentioned below:

To futher explain all the code in this article I have created Jupyter Notebooks which can be viewed here:

Given a string, we are required to find the longest palindromic substring. In this article, we have solved this problem using palindromic tree.

The problem is to find out the smallest missing positive integer given an unsorted integer array. We can solve this problem in linear time O(N) and in constant time O(1) using a greedy approach with hash map.