Image denoising is the technique of removing noise or distortions from an image. There are a vast range of application such as blurred images can be made clear. Before going deeper into Image denoising and various image processing techniques, let's first understand:

Following it, we will understand the various traditional filters and techniques used for image denoising.

What is an Image?

Is it someone's face, a building, an animal, or anything else?
No, An Image is a multidimensional array of numbers ranging from 0 to 255. Each number can be seen as a combination of x(horizontal) and y(vertical) coordinates, called as pixel.

What is an Image Noise?

It is an random variation of brightness or color information in images and an undesirable by-product of image that obscures the desired information.

# Generally, noise is introduced into the image during image transmission, acquisition, coding or processing steps.

What are the various types of Image Noise?

It is statistical noise having a probability density function (PDF) equal to that of the Normal Distribution.

Also called Data drop-out.
It is a fixed valued Impulse Noise. This has only two possible values(for 8-bit image), i.e. - 255(bright) for salt noise and 0(dark) for pepper noise.
Sources -

Also called Shot Noise or Quantum(Photon) Noise.
This type of noise has a probability density function of a Poisson distribution.
Source - random fluctuation of photons.

Speckle noise is a rough noise that naturally exists in and corrupts the quality of images. Speckle noise can be modeled by multiplying random pixel values with different pixels of an image.

What is Image Denoising?

It is a process to reserve the details of an image while removing the random noise from the image as far as possible.

We classify the image denoising filters into 2 broad categories -
1). Traditional Filters - Filters which are traditionally used to remove noise from images. These filters are further divided into Spatial domain filters and Transform domain filters.
2). Fuzzy based Filters - Filters which include the concept of fuzzy logic in their filtering procedure.

In this article we will go through traditional filters in detail. 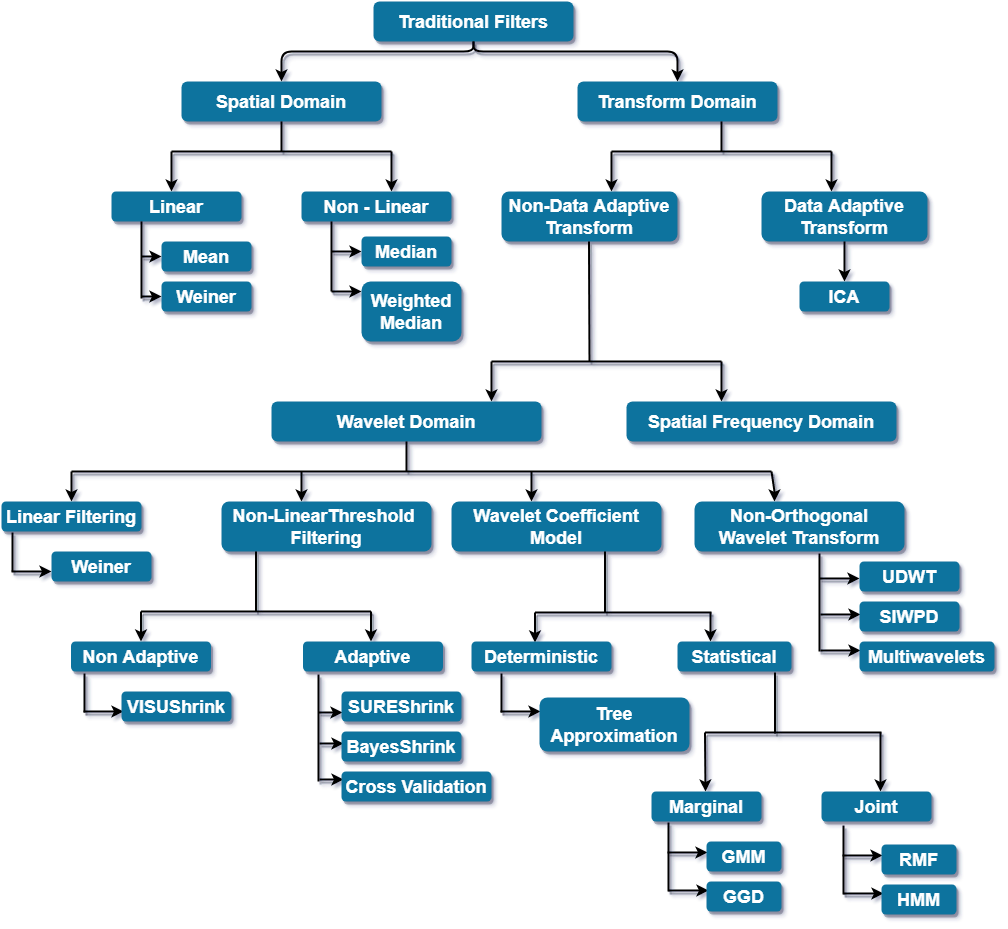 Let's discuss one by one -
1). Spatial Domain - In this, filters work directly on input image(on pixels of image).
2). Transform Domain - It is needed when it is necessary to analyze the signal. Here, we transform the given signal to another domain and do the denoising procedure there and afterwards inverse of the transformation is done in order to get final output.

It is classified into Linear and Non-Linear filters.

Effective for Gaussian and Salt and Pepper Noise.

Mean Filter is an optimal filter for gaussian noise in sense of Mean square error.

The equation of Weiner filter obtained while reducing MSE error is -

Note - Weiner filter works well only if the underlying signal is smooth.

With non-linear filters, the noise is removed without
any attempts to explicitly identify it.

It is a simple sliding-window filter that replaces the center pixel value in the kernel window with the median of all the pixel values in that kernel window.
Note - The kernel size must be a positive odd integer.

Only difference between Median and Weighted Median filter is the presence of Mask. This mask will having some weight (or values) and averaged.
1). This weighted mask is multiply with pixels of kernel window.
2). Pixels are sort into ascending order.
3). Find the median value from the sorted list.
4). Place this median at the centre.

Spatial-frequency filtering refers use of low pass filters
using Fast Fourier Transform (FFT). Here, we predefine a cut-off frequency and this filter passes all the frequencies lower than and attenuates all the frequencies greater than cut-off frequency.
The reason for doing the filtering in the frequency domain is generally because it is computationally faster to perform 2D Fourier transforms and a filter multiply than to perform a convolution in the image (spatial) domain.
Note - Convolution in image(spatial domain) is equivalent to multiplication in frequency domain.

A wavelet is a mathematical function used to divide a given function or continuous-time signal into different scale components.
A wavelet transform is the representation of a function by wavelets. Filtering methods in wavelet domain are further classified into -

Weiner filter yield optimal results when there is Gaussian based noise and the accuracy criterion is the mean square error (MSE).
However, designing a filter based on this assumption results into displeasing results.

Why thresholding is effective in noise reduction?
Because fo these following assumptions -

2). Soft Thresholding - shrinks coefficients above the threshold in absolute value.

Advantage of Soft thresholding over Hard thresholding -
Sometimes, pure noise coefficients may pass the hard threshold and appear as annoying 'blips' in the output. Soft thesholding shrinks these false structures.

Now, come to it's types - Adaptive and Non Adaptive.

This threshold is designed to remove additive Gaussian noise with high probability, which tends to result in overly smooth image appearance.

Why VisuShrink is non adaptive in nature ?

Since, the ut tends to be high(because of it's constraint that with high probability the estimate should be at least as smooth as the signal) for large values of M, so, it kills many signal coefficients along with the noise. Thus, the threshold does not adapt well to discontinuities in the signal.

SURE - Stein's unbiased Risk Estimate.
SUREShrink is a smoothness-adaptive hybrid scheme, it consists of two threshold values. We use -

SureShrink is subband adaptive technique - a separate threshold is computed for each detail subband.

Advantages of SUREShrink over VisuShrink -
The sharp features of the original image are retained in restored image and the MSE is lower than that of VisuShrink.

This approach focuses on exploiting the multiresolution properties of Wavelet Transform. This technique identifies close correlation of signal at different resolutions by observing the signal across multiple resolutions.
Note - This method is computationally much more complex and expensive, but produces Excellent output .

The modeling of the wavelet coefficients can either be deterministic or statistical.

The Deterministic method of modeling involves creating tree structure of wavelet coefficients.
Here, in this tree -
1). Each level represents each scale of transformation.
2). Each node represent the particular wavelet coefficient.
The optimal tree approximation displays a hierarchical interpretation of wavelet decomposition.
Note -

This approach focuses on interesting and appealing properties of the Wavelet Transform such as -
1). multi-scale correlation between the wavelet coefficients.
2). local correlation between neighborhood coefficients etc.
This approach has an inherent goal of perfecting the exact modeling of image data with use of Wavelet Transform.
There are two techniques to perform statistical modeling of wvelet transform -

The commonly used methods to model the wavelet coefficients distribution are -
1). HMM - Hidden Markov Model, used to capture intra-scale correlations. Once the correlation is captured by HMM, Expectation Maximization is used to estimate the required parameters and from those, denoised signal is estimated from noisy observation using well known MAP(Maximum A Posteriori) estimator.
2). RMF - Random Markov Field, used to capture inter-scale correlations.
The complexity of local structures is not well described by Random Markov Gaussian densities whereas Hidden Markov Models can be used to capture higher order statistics.

What is Orthogonal Wavelet?
-> Whose inverse wavelet transform is the adjoint of the wavelet transform.
Of course, non-orthogonal wavelet is opposite of orthogonal wavelet.
3 Techniques are there -
1). Undecimated Wavelet Transform (UDWT) - a shift invariant technique, used for decomposing the signal to provide visually better solution. It avoids visual artifacts such as pseudo-Gibbs phenomenon. Though results are quite good but UDWT is less feasible as it adds a large overhead of computations.
2). Shift Invariant Wavelet Packet Decomposition (SIWPD) is exploited to obtain number of basis functions. Then using Minimum Description Length principle the best basis function is found out which yielded smallest code length required for description of the given data. Then, thresholding was applied to denoise the data.
3). Multiwavelets outperforms UDWT in performance but further increases the computation complexity. The multiwavelets are obtained by applying more than one mother function (scaling function) to given DWT of image. Multiwavelets possess properties such as short support, symmetry, and the most importantly higher order of vanishing moments.

"Independent component analysis (ICA) is a method for finding underlying factors or components from multivariate (multi-dimensional) statistical data. What distinguishes ICA from other methods is that it looks for components that are both statistically independent, and nonGaussian."

This assumption helps the algorithm to denoise images with Non-Gaussian and Gaussian distribution both.

Drawbacks as compared to wavelet based methods are:

Besides all these techniques, there is one more technique:

Given a directed graph, a vertex ‘v1’ and a vertex ‘v2’, print all paths from given ‘v1’ to ‘v2’. The idea is to do Depth First Traversal of given directed graph. Start the traversal from v1. Keep storing the visited vertices in an array say path[]. If we reach the vertex v2, pathExist becomes true