In this article, we will understand decision tree by implementing an example in Python using the Sklearn package (Scikit Learn).

In this article we will discuss about regression trees.
Regression trees- When the decision tree has a continuous target variable. For example, a regression tree would be used for the price of a newly launched product because price can be anything depending on various constraints.

Consider this example for decison tree! 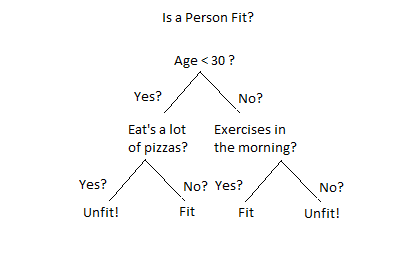 In this example we decide if a person is fit or not. And a person's fitness depends on various constraints.

Importing the libraries numpy for linear algebra matrices, pandas for dataframe manipulation and matplotlib for plotting and we have written %matplotlib inline to view the plots in the jupyter notebook itself.

Suppose we want to predict the salary for a new employee whose level of experience is 6.5 and he said that the previous company paid him 160000 and he wants a higher salary and we have got some data which has three columns- Position,Level and salary. then here we will use decision tree to predict his salary based on the data we have.

You can get more information on the dataset by typing

we are training the entire dataset here and we will test it on any random value. Suppose the new employee said he has a experience of 6.5 years so we will predict his salary based on that.

Now let's check what is the predicted salary for the new employee.

It returns 150000. which is a little less than the salary that the employee told us.
Now visualising the results 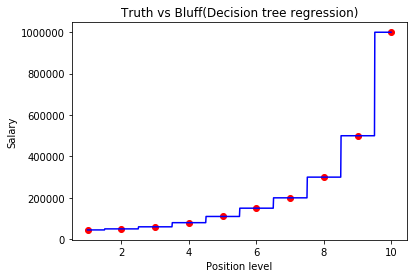 So, we can conclude that the prediction is not accurate but close to the real value.
To overcome this accuracy issue we have another algorithm called Random forest.Random forest is an ensemble learning algorithm, which uses multiple algorithms together to get the result.

Random forest uses many decision trees so, it makes our predictions more accurate.

In Java, Reflection is a powerful and advanced feature that enables the programmers to inspect or modify the classes, interfaces, and methods of a program running on Java Virtual Machine.