Face Aging, a.k.a. age synthesis and age progression can be defined as aesthetically rendering an image of a face with natural aging and rejuvenating effects on the individual face.

Traditional face aging approaches can be split into 2 types:

➤ The discrepancies between these faces constitute the aging patterns which are then used to transform an input face image into the target age group.

Pros - Are simple and fast

Cons - As they are based on general rules, they totally discard the personalized info which often results in unrealistic images.

➤ Employ parametric models to simulate the aging mechanisms of muscles, skin and skull of a particular individual

Both these approaches generally require face aging sequences of the same person with wide range of ages which are very costly to collect.

Anyway, in most of the real-life use cases, face aging must be combined with other alterations to the face, e.g. adding sunglasses or moustaches.

This is where the Age-cGAN model comes in.

You see, vanilla GANs are explicitly trained to generate the most realistic and credible images which should be hard to distinguish from real data.

Obviously, since their inception, GANs have been utilized to perform modifications on photos of human faces, viz. changing the hair colour, adding spectacles and even the cool application of binary aging (making the face look younger or older without using particular age categories to classify the face into).

But a familiar problem of these GAN-based methods for face modification is that, the original person's identity is often lost in the modified image.

The original paper made 2 new contributions to this field:

Conditional GANs (cGANs) extend the idea of plain GANs, allowing us to control the output of the generator network.

We know that face aging involves changing the face of a person, as the person grows older or younger, making no changes to their identity.

In most other models (GANs included), the identity or appearance of a person is lost by 50% as facial expressions and superficial accessories, such as spectacles and facial hair, are not taken into consideration.

Age-cGANs consider all of these attributes, and that's why they are better than simple GANs in this aspect.

Read this to get an intuitive introduction of GANs.


GANs can be extended to a conditional both provided both the generator and discriminator networks are conditioned on some extra information, y.

y can be any kind of additional information, including class labels and integer data.

In practice, y can be any information related to the target face image - facial pose, level of illumination, etc.

The conditioning can be performed by feeding y into both the generator and discriminator as an additional input layer.

Some drawbacks of vanilla GANS:

A cGAN overcomes these difficulties and can be used to generate multi-modal models with different conditions for various categories.

Below is the architecture of a cGAN: 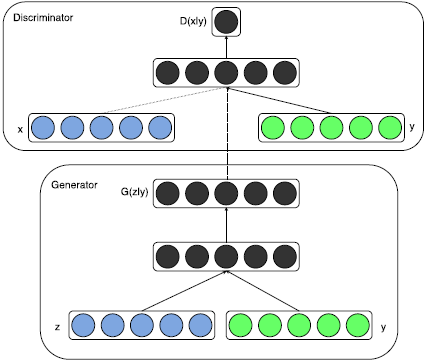 Let us understand the working of a cGAN from this architecture -

In the discriminator, x and y are presented as inputs and to a discriminative function (represented technically by a Multilayer Perceptron).

is modeling the distribution of our data given z and y.

The Age-cGAN model proposed by the authors in the original paper used the same design for the Generator G and the Discriminator D as in Radford, et al. (2016), "Unsupervised representation learning with deep convolutional generative adversarial networks", the paper which introduced DCGANs.

In adherence to Perarnau, et al. (2016), "Invertible conditional GANs for image editing", the authors add the conditional information at the input of G and at the first convolutional layer of D.

The picture shows the face aging method used in Age-cGANs.

b) illustrates switching the age condition at the input of the generator G to perform face aging.

The Age-cGAN consists of 4 networks - an encoder, the FaceNet, a generator network and a discriminator network.

The functions of each of the 4 networks -

a) Encoder - Helps us learn the inverse mapping of input face images and the age condition with the latent vector .

b) FaceNet - It is a face recognition network which learns the difference between an input image x and a reconstructed image .

c) Generator network - Takes a hidden (latent) representation consisting of a face image and a condition vector, and generates an image.

d) Discriminator network - Discriminates between the real and fake images.

cGANs have a little drawback - they can't learn the task of inverse mapping an input image x with attributes y to a latent vector z, which is necessary for the image reconstruction: .

To solve this problem, we use an encoder network, which we can train to approximate the inverse mapping of input images x.

A) The encoder network

B) The generator network

You can refer to this page to learn more about pretrained models in Keras.

To learn more about the Inception-ResNet-v2 model, you could also read the original paper by Szegedy, et al. (2016), "Inception-v4, Inception-ResNet and the Impact of Residual Connections on Learning".

The Age-cGAN model has multiple stages of training. The Age-cGAN has 4 networks, which get trained as 3 stages which are as follows:

Does the above equation seem familiar to you? You're right!
This equation is identical to the equation of the objective function of a 2-player minimax game we have seen before.

Training a cGAN can ideally be thought of as a minimax game, in which both the generator and the discriminator networks are trained simultaneously.

(For those who are clueless about the minimax game we are talking about, please refer this link)

In the preceding equation,

Although GANs are no doubt one of the most powerful generative models at present, they cannot exactly reproduce the details of all real-life face images with their infinite possibilities of minor facial details, superficial accessories, backgrounds, etc.

It is common fact that, a natural input face image can be rather approximated than exactly reconstructed with Age-cGAN.

➤ During latent vector optimization, we optimize the encoder network and the generator network simultaneously.
➤ The equation used for this purpose is as follows:

This equation follows the novel "Identity Preserving" latent vector optimization approach followed by the authors in their paper.

The key idea is simple - given a face recognition neural network FR which is able to recognize a person's identity in an input face image x, the difference between the identities in the original and reconstructed images x and can be expressed as the Euclidean distance between the corresponding embeddings FR(x) and FR().

Hence, minimizing this distance should improve the identity preservation in the reconstructed image .

FR stands for Face Recognition network, which is an internal implementation of the FaceNet CNN.

The equation above indicates that the Euclidean distance between the real image and the reconstructed images should be minimal.

To sum it up, in this stage, we try to minimize the distance in order to maximize identity preservation.

✪ The first step of the face aging method presented in the paper (i.e. input-face reconstruction) is the key one.

✪ Details of Age-cGAN training from the original paper -
➢ The model was optimized using the Adam algorithm, and was trained for 100 epochs.
➢ In order to encode the person's age, the authors had defined 6 age categories: 0-18, 19-29, 30-39, 40-49, 50-59 and 60+ years old.
➢ The age categories were selected so that the training dataset contained at least 5,000 examples in each age category.

Experiments on the Age-cGAN model

The authors trained the Age-cGAN on the IMDB-Wiki_cleaned [3] dataset containing around 120,000 images, which is a subset of the public IMDB-Wiki dataset [4].

110,000 images were used for training of the Age-cGAN model and the remaining 10,000 were used for the evaluation of identity-preserving face reconstruction.

It is observed that the Age-cGAN model perfectly disentangles image information encoded by latent vectors z and by conditions y, making them independent.

➔ Steps taken to measure performance of the model

I To measure how well the Age-cGAN model manages to generate faces belonging to precise age-categories, a state-of-the-art age estimation CNN model [3] was employed.

II The performances of the age estimation CNN (on real images from the test part of the IMDB-Wiki_cleaned dataset) and Age-cGAN (10,000 synthetic images generated) was compared.

➢ This shows that the Age-cGAN model can be used for the production of realistic face images with the required age.

B) Identity-Preserving Face Reconstruction and Aging

The image above shows some examples of face reconstruction and aging.

a) depicts the original test images.

c) demonstrates the reconstructed images generated using the "Pixelwise" and "Identity-Preserving" optimized latent approximations: and , and

It can be clearly noted from the above picture that the optimized reconstructions are closer to the original images than the initial ones.

But things get more complicated when it comes to the comparison of the 2 latent vector optimization approaches.

➔ Steps taken to measure performance of the model

I) For the objective comparison of the 2 approaches for the identity-preserving face reconstruction, the authors used the "OpenFace" [5] software, which is one of the renowned open-source face recognition algorithms.

II. Given 2 face images, "OpenFace" decides whether they belong to the same person or not.

III. Using both the approaches, 10,000 test images of the IMDB-Wiki_cleaned dataset were reconstructed and the resulting images alongside the corresponding original ones were then fed to "OpenFace".

➢ Table 1 presents the percentages of "OpenFace" positive outputs (i.e. when the software believed that a face image and its reconstruction belonged to the same person).

The results confirm the visual observations presented above.

➢ Initial reconstructions allow "OpenFace" to recognize the original person in only half of the test examples.

➢ This number is slightly increased by "Pixelwise" optimization but the improvement is very slight.

Now we shall cover the basic implementation of all the 4 networks - encoder, generator, discriminator and face recognition - using the Keras library.

Implementation of the networks in Keras

The complete implementation of the Age-cGAN model is too huge (~600 lines of code) to be demonstrated in one post, so I decided to show you how to build the networks, the crucial components of the model, in Keras.

➤ Upsampling is a technique to keep the dimension of the output the same as before, while reducing the computation per layer simultaneously.

Bonus: The entire code can be found at this Google Colab link and this repository

Finally, let's have a look at some cool applications of the Age-cGAN model.

➤ This can be incorporated into security applications as means of authorization e.g. smartphone unlocking or desktop unlocking.

➤ Current face recongnition system suffer from the problem of necessary updation with passage of time.

➤ With Age-cGAN models, the lifespan of cross-age face recognition systems will be much longer.

➤ As the age of a child increases, their facial features change, and it becomes much harder to identify them.

➤ An Age-cGAN model can simulate a person's face at a specified age easily.

➤ For e.g. in mobile applications, to show and share a person's pictures at a specified age.

The famous phone application FaceApp is the best example for this use case.

➤ It requires lots of visual effects and to manually simulate a person's face when they are older. This is a very tedious and lengthy process too.

➤ Age-cGAN models can speed up this process and reduce the costs of creating and simulating faces significantly.

That's it for now! I guess I have explained you about Age-cGANs and Face Aging enough that you could teach it to someone else.

I hope you liked this article.

Follow me on Linkedin for updates on more such awesome articles and other stuff :)

We have taken a deep look into using list elements in HTML and the different designs we can achieve.

You will get n idea about What is Image Classification?, pipeline of an image classification task including data preprocessing techniques, performance of different Machine Learning techniques like Artificial Neural Network, CNN, K nearest neighbor, Decision tree and Support Vector Machines