In this article, we will talk about a relatively new activation function and somewhat better as well. Basically we will be discussing about Gaussian Error Linear Unit or GeLU.

For neural networks, the sigmoid function was previously the most used nonlinear activation function. It has gone out of favour due to delayed and imprecise convergence, despite having a probabilistic interpretation. The commonly utilised ReLU activation, on the other hand, frequently exhibits higher convergence but lacks a probabilistic interpretation. Despite their differences, both nonlinearities can have a significant influence on a neural network's overall performance.

The Gaussian Error Linear Unit, or GeLU, is a function that simply multiplies its input by the cumulative density function of the normal distribution at this input. Because this computation is rather slow, a considerably quicker approximation that varies only in the fourth decimal place is frequently employed in practise.

GELU, unlike the ReLU family of activations, weights its inputs by their value rather than their sign when thresholding. When GELU activation is compared to the ReLU and ELU functions, it has been discovered that GELU activation improves performance across all computer vision, natural language processing, and voice tasks.

Since the cumulative distribution function of a Gaussian is often computed with the error function, we define the Gaussian Error Linear Unit (GELU) as:

We can approximate the GELU with: 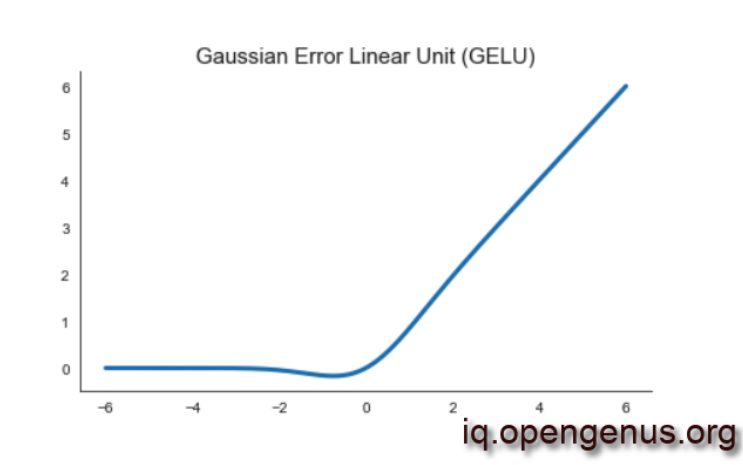 The GELU looks a lot like the ReLU and ELU. The GELU, for example, becomes a ReLU when σ→0 and μ=0. Furthermore, the ReLU and GELU are asymptotically equivalent. The key difference between GelU and ReLu is that, unlike ReLU, GeLU may be both negative and positive.

Let's talk more about the differences.

Differences Between the major Activation Function and GeLU:

Let's see if this nonlinearity has any effect on past activation functions. To do this, we use GELUs (=0,=1), ReLUs, and ELUs (=1) to train a fully connected neural network. With a batch size of 128 neurons, each 7-layer, 128 neuron wide neural network is trained for 50 epochs. We employ the Adam optimizer, which recommends a learning rate of 0.001. The weights are equally started on the unit hypersphere since this improves the performance of each nonlinearity. Finally, we accomplish this job with no dropouts and a 0.5 dropout rate. Under both dropout rates, the GELU has the lowest median training log loss, as shown in Figure 2. As a result, while being inspired by a distinct stochastic process, the GELU works well with dropout.

Figure: MNIST Classification Results. Left are the loss curves without dropout, and right are curves with a dropout rate of 0.5. Each curve is the the median of five runs. Training set log losses are the darker, lower curves, and the fainter, upper curves are the validation set log loss curves.

We'll now train a deep autoencoder on MNIST in a self-supervised scenario. We utilise a network with layers with widths of 1000, 500, 250, 30, 250, 500, 1000, in that sequence, to achieve this. We employ the Adam optimizer with a batch size of 64 once again. The mean squared loss is what we have. The learning rate varies from 103 to 105. The outcomes are depicted in Figure. The GELU ties or outperforms the other nonlinearities considerably. This demonstrates that the GELU nonlinearity is stable and accurate at various learning rates.

For more intricate architectures the GELU nonlinearity again outperforms other nonlinearities. Using the CIFAR-10 dataset, we evaluate this activation function on shallow and deep convolutional neural networks. With a shallow architecture, the network has the stacks (2×3×32),(2×3×64) representing the number of layers, receptive field, and number of filters, respectively. Then feed this output through a two layer network with 512 and 256 neurons for the two layers. We apply max-pooling after every stack, and we run two experiments: we apply no dropout or use dropout rates of 0.25 after the first stack, 0.25 after the second stack, and 0.5 before the last fully-connected layer. We use the Adam optimizer, tune over the learning rates 10−3,10−4,10−5, and initialize weights on the unit hypersphere (each filter has an ℓ2 norm of one). Figure shows the results. In both situations, GELUs provide faster and superior convergence. 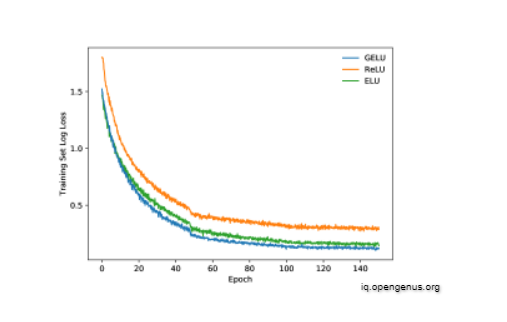 With this article at OpenGenus, you must have the complete idea of Gaussian Error Linear Unit (GELU).

In this article, we have explored Code Generation in Compiler Design in depth including challenges and key techniques like Instruction Selection, Register Allocation using Graph Coloring, Instruction Ordering and much more.

In this article, we have explored How Clients and Servers Communicate and Types of Client Server Communication such as HTTP Push and Pull, Long Polling and much more.