John McCarthy was one of the most influential Computer Scientists in 1950s and a Professor at Stanford University for nearly 38 years. He is best known for: 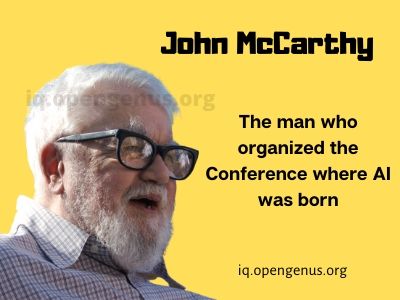 John McCarthy coined the term "Artificial Intelligence" in 1955 and he is one of the founding members of AI.

John McCarthy was the organizer of Dartmouth conference (took place in 1956) which is known as the birthplace of Artificial Intelligence. He was an Assistant Professor at Dartmouth University at the time.

His team at Stanford University developed a program to play Chess named Kotok-McCarthy in 1966 and put it to test with a battle with programs from Soviet Union. Following were the results:

Though his program did not win, it was the beginning which paved the way to stronger programs like Watson.

His programming Language LISP was the preferred language for AI applications since its release in 1960s.

His other major contributions to AI include:

John McCarthy developed a programming language based on Lambda Calculus which he named as LISP. He developed it in late 1950s and was formally released in 1960.

LISP was the preferred language for AI applications since its release in 1960s.

LISP is the 2nd oldest High-level programming language that is still in wideuse today (2020s) even after 60 years. The oldest language is Fortran which is older than LISP just by 1 year.

John McCarthy was the first person to propose the idea of Utility Computing publically in 1961 at a conference at MIT which was focused on time-sharing systems in which he contributed.

Utility Computing is the domain of computing where a certain set of Computing resources is shared among multiple users usually as a service. Common examples include hosting services, distributed computing, cloud computing and much more.

In this article, we have discussed about the unordered_set container class of the C++ Standard Template Library. unordered_set is one of the most useful containers offered by the STL and provides search, insert, delete in O(1) on average.

C++ uses the concept of streams to perform I/O operations. A stream is a sequence of bytes in which character sequences are 'flown into' or 'flow out of'. In this article, we have covered cin and cout in C++ in depth.