LASSO is the acronym for Least Absolute Shrinkage and Selection Operator. Regression models' predictability and interpretability were enhanced with the introduction of Lasso. Therefore, a thorough understanding of mathematics will be useful for ML applications. Using ADMM, we may investigate this solution.

LASSO is often associated with it performing the choices of a smaller set of the known covariates from the data to be used in a model. In other more familiar words, it can be called a Feature Selector.

In general, feature selectors are used to select the most relatively relevant information providing features from all raw observational data.

On carefully reviewing the previous statement we can see that there has to be some logic to deciding on which of the features are considered to be of greater or lesser importance. The simplest way to do this is by manually calculating and comparing the correlation values of each feature of the data vs the result. Before moving further we can look into,

The need for Feature Selectors

The age of digitization has and is producing a tremendous amount of data, to keep up with the amount of data and put it to good use, we employ ML techniques. To feed the models we build with irrelevant features/input would naturally result in it producing corresponding outputs. A well-defined model is one that uses only as many as required features to provide accurate predictions, the advantages of
it are,

To overcome this issue and to better utilize the models we build we take the help of feature selectors to simplify the task for us.

when the volume of data is scaled, it becomes tedious/almost impossible to manually sort and use the traditional way to decide the features appropriate for the model. LASSO provides an automated solution to this problem.

Let's now establish the same in ML terms. The inspiration for formulating LASSO problem from a machine learning perspective is derived from the following,
Consider a machine learning model to have ’m’ features and ’n’ data points, conventionally we define the terms in use as,

This model produces predictions using each data point by the function say,

The Cost function J(β) that helps to improve the predictions made by the model is defined as,

here the objective is,

we can now correspondingly modify the objective function to incorporate the decision term. Let's start by considering an L0-Norm,

here ∥J(β) ∥0 is a term that describes the number of non-zero terms and τ is the term that defines the strength of consideration
of significant characters, in other words when the value of τ increases then the sparsity of the solution β is increased.

The objective function f(n) from the above equation is intractable i.e., there exist no efficient algorithms to solve it. On replacing
∥J(β)∥0 with equivalent L1 norm ∥J(β)∥1 we obtain,

similarly here the objective is,

The above equation is the base form and serves as the starting point for the LASSO problem.

Using a more conventional variable assignment for solving general LASSO problem we can define it as,

Representing the same in ADMM format,

The corresponding Augmented Lagrangian form can be written as,

In order to find the update for x, the minimization of the Lagrangian with respect to x is done as,
Assuming z^k and y^k are known, 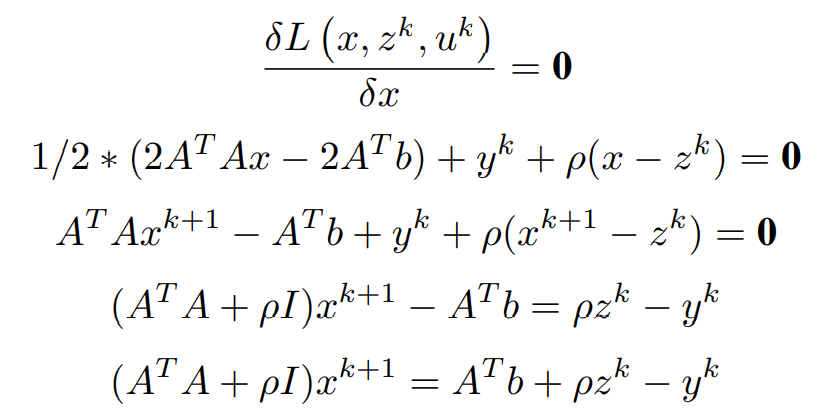 Finally, the x update is obtained as,

Similarly, in order to find the update for z, the minimization of the Lagrangian with respect to z is done as, x^(k+1) has been computed and y^k is assumed to be known,

On comparing the above equations, the similarity of the Right-hand sides leads us to simplify the obtained z^(k+1) to be represented in a more compact form like,

Replacing (1/ρ)y^k with u^k and putting it all together, the updates for each variable are,

A simple and intuitive code implementation of the update steps on synthesized data in Matlab can be done by following the basic steps,

The matlab definition of the assistive function shrinkage is,

The following output is obtained,

Huber Fitting in general is the approach of using the Huber function to fit the data models, the advantage of this approach is due to the clever formulation of the Huber function which brilliantly combines the best features of both preceding optimization solution approaches of LAD and LS.

Least Absolute Deviation (LAD) is a powerful approach for solving optimization problems with good tolerance to outliers. Hence solving it to obtain a practicably applicable form is essential to take advantage of its theoretical prowess.