Java is an Object Oriented Programming language and supports the feature of inheritance. We cannot have Multiple Inheritance in Java directly due to Diamond Problem but it can be implemented using Interfaces. We have explained this in detail starting with basic introduction to inheritance.

Inheritance is inheriting the properties of one class(Parent class) in the another class(child class). This relation can be defined by using the extends keyword as −

Multiple inheritance is inheriting properties of two or more parent classes to one child class.As given in the below diagram class A and class B is being inherited by the child class C.

Sample code of how multiple inheritance works in java is given below. First two classes are made ParentA and ParentB and they both have same signature methods walk() . a child class is made which is inheriting both the classes by using a keyword 'extends'.

In the above code the compiler will get confuse which method to call when object of child class calls walk() method and results in compile time error.

Hence, Java does not support multiple inheritance because it can lead to increased complexity and ambiguity in case of 'Diamond Problem' which means that when classes with same signature in both the parent classes are made and child class when on calling the method makes the compiler cannot determine which class method to be called and this causes diamond problem and gives the compile time Error. 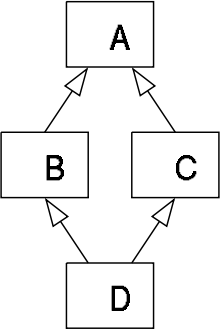 How diamond problem is coded in java is shown below. 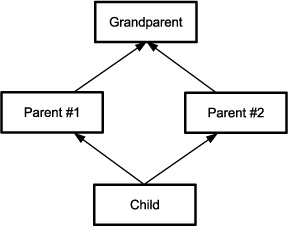 in the above code there is GrandParentA class which is inherited by two classes ParentA and ParentB and then both the classes are being inherited by child class and this leads to Diamond problem because compiler will get confuse which method to call when object of child class calls walk() method as both the parent classes have same signature name method and results in compile time error due to diamond problem.

The solution to this problem of Multiple inheritance is using Interface

hence , to perform multiple interfaces in a class we will be using a keyword 'implements'.

Below is an example of where multiple inheritance is achieved with the help of interfaces.

Conclusion :-
Java does not support "multiple inheritance" (a class can only inherit from one parent class). However, it can be achieved with help of interfaces, because the class can implement multiple interfaces.

With this article at OpenGenus, you must have the complete idea of Multiple Inheritance in Java. Enjoy.

There are many ways to create user login in Flask like using flask-login or JWT and many more. But using sessions is the simplest to logged the user in or out which we have explored in this article.

Divide and conquer optimization is used to optimize the run-time of a subset of Dynamic Programming problems from O(N^2) to O(N logN). We have demonstrated it with an example.