By definition, Native language identification (NLI) is the task of determining an author's native language based only on their writings or speeches in a second language. This is an application of Machine Learning. Let us break this down to know what this actually means.

NLI is a field of Natural Language Processing which deals which identifying these subtle differences between non-native speakers. NLI is based on the assumption that the mother tongue (Hindi for Indian or Arabic for Arabs) influences second language acquisition and production (For example, English). 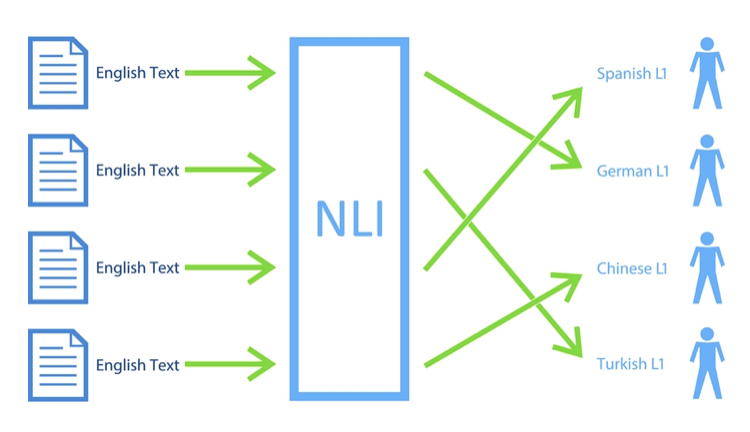 Why to study NLI?

There are two important reasons to study NLI.

Firstly, there is second language acquisition. NLI methods can be used to investigate the influence of native language in foreign language acquisition and production. For example, for an Indian person, how hindi affects his ability to read and write english. What inflections does it introduces in his english language.

Second reason might be a practical one. NLI can be used in Forensic linguistics. For example, it can identify the background and attributes of an author or can identify the native country of the author of an anonymous note.

Let us dive in these two questions.

Image shows different n-grams (1(uni) ,2(bi),3(tri)). So, for example, in tri-gram, "a swimmer likes" or "swimmer likes swimming" is considered as a feature.

All the features, consisting of either characters or words or part-of-speech tags or their combinations, etc that are mapped into normalized numbers (norm L2). For the mapping, popular technique is to use TF-IDF, a weighting technique. It automatically gives less weight to words that occur in all the classes or words that have very high frequency (such as a, an, the, etc) and assigns higher weight to words that occur in few classes i.e., words that helps in discriminating classes. In simple terms, TF gives more weight to a frequent term in the text and IDF downscales the weight if the term occurs in many text.

Now, the task is to classify the text into respective country/region. We need algorithms that are suitable for sparse data and high dimensional(text data is high dimensional and sparse). One such prominent algorithm is Support Vector Machines (SVMs). SVM have been explored systematically for text.

categorization. An SVM classifier finds a hyperplane that separates examples into classes with maximal margin. Other classifiers such as neural networks could be tried for NLI. The output of any of these classifiers would be the number of languages we wanted to classify. For example, if you are given english texts of an Indian, Chinise and a Japanese person, the output of a classifier would be 3.

A range of ensemble based classifiers have also been applied to the task and shown to improve performance over single classifier systems.

Is there any dataset which could be used to implement the above or any other method?

Yes! It is TOEFL11. It consists of 12,100 English essays (about 300 to 400 words long) from the Test of English as a Foreign Language (TOEFL). The essays are written by 11 native language speakers shown in the table below. 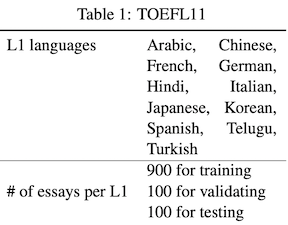 Some reseach papers that will help in undertanding NLI further

With this article at OpenGenus, you must have a strong understanding of the overview of Native Language Identification (NLI). Enjoy.

CNN (Convolutional Neural Network) is the fundamental model in Machine Learning and is used in some of the most applications today. There are some drawbacks of CNN models which we have covered and attempts to fix it.