Well, that’s exactly recurrent neural nets in practice. This task of predicting the next word from the general context of the sentence is something a recurrent neural network can easily handle. More on this later. Let’s start with the fundamentals first.

So, we will discuss the following in this post:

So, what are recurrent neural networks?

They are yet another type of artificial neural networks, which are specifically designed to work on sequential data by recognizing patterns in such data. They have an abstract concept of sequential memory which allows them to handle data such as text, handwriting, spoken word, and even genomes.

What do we mean by sequential data?
Consider this. As you are reading this article, you are understanding each word based on the previous word you read and based on the overall context of the post. The independent words would be meaningless. They become meaningful only when they follow a particular sequence.
This means that we have some persistence. The same kind of persistence is shown by recurrent neural networks, owing to their structure, which is, having a loop as shown below.

In the above diagram, a chunk of neural network, A, looks at some input xt and outputs a value ht. A loop allows information to be passed from one step of the network to the next.

This chain-like nature reveals that recurrent neural networks are intimately related to sequences and lists. They’re the natural architecture of neural network to use for such data and which is why they have been successfully applied to problems like machine translation, image captioning, speech recognition, music generation and a lot more!
Okay, so the core reason why RNNs are exciting is because they allow us to operate over data, and so depending upon the length and number of sequences in the input and the output, we have a few categories in RNN.

There are mainly two issues with every type of neural net(including RNN):

Vanishing gradients
As our RNN processes more steps, it has trouble retaining information from the previous steps. So, in some cases, this might not be a problem, where the word just depends on its previous neighboring word. For eg.the sentence: I can speak French very well. Now the word ‘well’ in this sentence is very intuitive to come at this place and RNN can handle such sentences effectively. But consider this sentence: I am going to France, the language spoken there is _______. Now the answer “French” here has a dependency on the word France, which is far away from it. This type of dependency is known as long term dependency, and the normal structure of RNN fails to operate over these.

Short-Term Memory and the vanishing gradient is due to the nature of back-propagation; an algorithm used to train and optimize neural networks.
When doing back propagation, each node in a layer calculates it’s gradient with respect to the effects of the gradients, in the layer before it. So if the adjustments to the layers before it is small, then adjustments to the current layer will be even smaller.
That causes gradients to exponentially shrink as it back propagates down. The earlier layers fail to do any learning as the internal weights are barely being adjusted due to extremely small gradients. And that’s the vanishing gradient problem.

Gradients shrink as they backpropagate down.

Because of vanishing gradients, the RNN doesn’t learn the long-range dependencies across time steps. That means that there is a possibility that the word “France” is not considered when trying to predict the user’s intention. The network then has to make the best guess with “there is?”. That’s pretty ambiguous and would be difficult even for a human. So not being able to learn on earlier time steps causes the network to have a short-term memory.

Exploding Gradients
The working of the exploding gradient is similar to that of vanishing gradient but the weights here change drastically instead of negligible change. 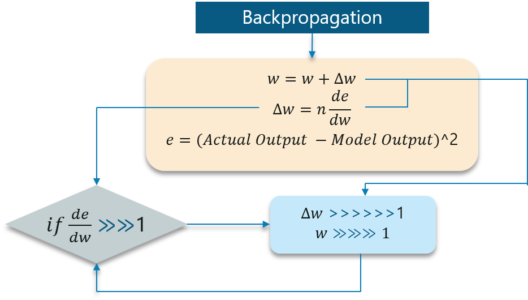 Remembering information for long periods of time is practically their default behavior, not something they struggle to learn!

LSTMs also have this chain-like structure, but the repeating module has a different structure. Instead of having a single neural network layer, there are four, interacting in a very special way.

Step by Step LSTM Walk Through
Step 1:
The first step in the LSTM is to identify that information which is not required and will be thrown away from the cell state. This decision is made by a sigmoid layer called a forget gate layer.

The highlighted layer above is the sigmoid layer.

The calculation is done by considering the new input and the previous timestamp which eventually leads to the output of a number between 0 and 1 for each number in that cell state.
As a typical binary, 1 represents to keep the cell state while 0 represents to trash it.
Consider the case of gender classification, we might want to forget the old gender, whenever we see a new one. The forget layer helps the network do that.

Step 2:
The next step is to decide what new information we’re going to store in the cell state. This has two parts:

In the next step, we’ll combine these two to create an update to the state.
In the example of gender classification, we’d want to add the gender of the new subject to the cell state, to replace the old one we’re forgetting.

Step 3:
Now, we will update the old cell state Ct−1, into the new cell state Ct.
First, we multiply the old state (Ct−1) by f(t), forgetting the things we decided to leave behind earlier.

Then, we add i_t* c˜_t. This is the new candidate values, scaled by how much we decided to update each state value.
In the second step, we decided to do make use of the data which is only required at that stage.
In the third step, we actually implement it.
In the language case example which was previously discussed, there is where the old gender would be dropped and the new gender would be considered.

Step 4:
Finally, we need to decide what we’re going to output. This output will be based on our cell state, but will be a filtered version.

First, we run a sigmoid layer which decides what parts of the cell state we’re going to output.
Then, we put the cell state through tanh (push the values to be between −1 and 1)
Later, we multiply it by the output of the sigmoid gate, so that we only output the parts we decided to.

For the language model example, since it just saw a subject, it might want to output information relevant to a verb, in case that’s what is coming next. For example, it might output whether the subject is singular or plural, so that we know what form a verb should be conjugated into if that’s what follows next.

Summing up all the 4 steps:

Okay, so as our use case , let's discuss how to assign an emoji to a sentence based on its sentiment.
This project is a part of Coursera deep learning course on Recurrent Neural Networks.
The code below is intended to demonstrate only building and working of an LSTM model and doesn’t serve the purpose of a full working project. For complete project code, head over to this notebook

The Embedding() layer takes an integer matrix of size (batch size, max input length) as input. This corresponds to sentences converted into lists of indices (integers), as shown in the figure below.

So, the first step we want to do is to convert all our training sentences into lists of indices, and then zero-pad all these lists so that their length is the length of the longest sentence.
Also, we know that the largest integer (i.e. word index) in the input should be no larger than the vocabulary size.
The layer outputs an array of shape (batch size, max input length, dimension of word vectors).

Let's make a function to convert our sentence array into indices array, so that it can be fed into the Embedding layer.

What we will do is:

So our function takes in the pre-trained Glove 50 dimensional vectors and creates an Embedding() layer.

Now, we will start training our model.

To appreciate the performance of our LSTM model, let's look at an interesting example, that actually sets LSTM apart from statistical word embedding models or even simple RNN models.
Input: "Not feeling happy"
Output:

Had we used simpler models, the output would have been a happy face!

Generative Adversarial Network is a network with two opposite components which train to eventually reach the target. This was developed in 2014.

In this article, we explored the ideas involved in Convolutional Neural Networks (CNN) through Image Classification

OpenGenus IQ: Computing Expertise & Legacy
—
Understanding Recurrent Neural Networks with an example of assigning an emoji to a sentence
Share this