Regula Falsi method or the method of false position is a numerical method for solving an equation in one unknown. It is quite similar to bisection method algorithm and is one of the oldest approaches. It was developed because the bisection method converges at a fairly slow speed. In simple terms, the method is the trial and error technique of using test ("false") values for the variable and then adjusting the test value according to the outcome.

As before (in bisection method), for a given continuous function f(x) we assume that f (a) and f (b) have opposite signs ( a = lower guess, b = upper guess). This condition satisfies the Balzano's Theorem for continuous function.

Now after this bisection method used the midpoint of the interval [a, b] as the next iterate to converge towards the root of f(x).

A better approximation is obtained if we find the point (c, 0) where the secant line L joining the points (a, f (a)) and (b, f (b)) crosses the x-axis (see the image below). To find the value c, we write down two versions of the slope m of the line L: 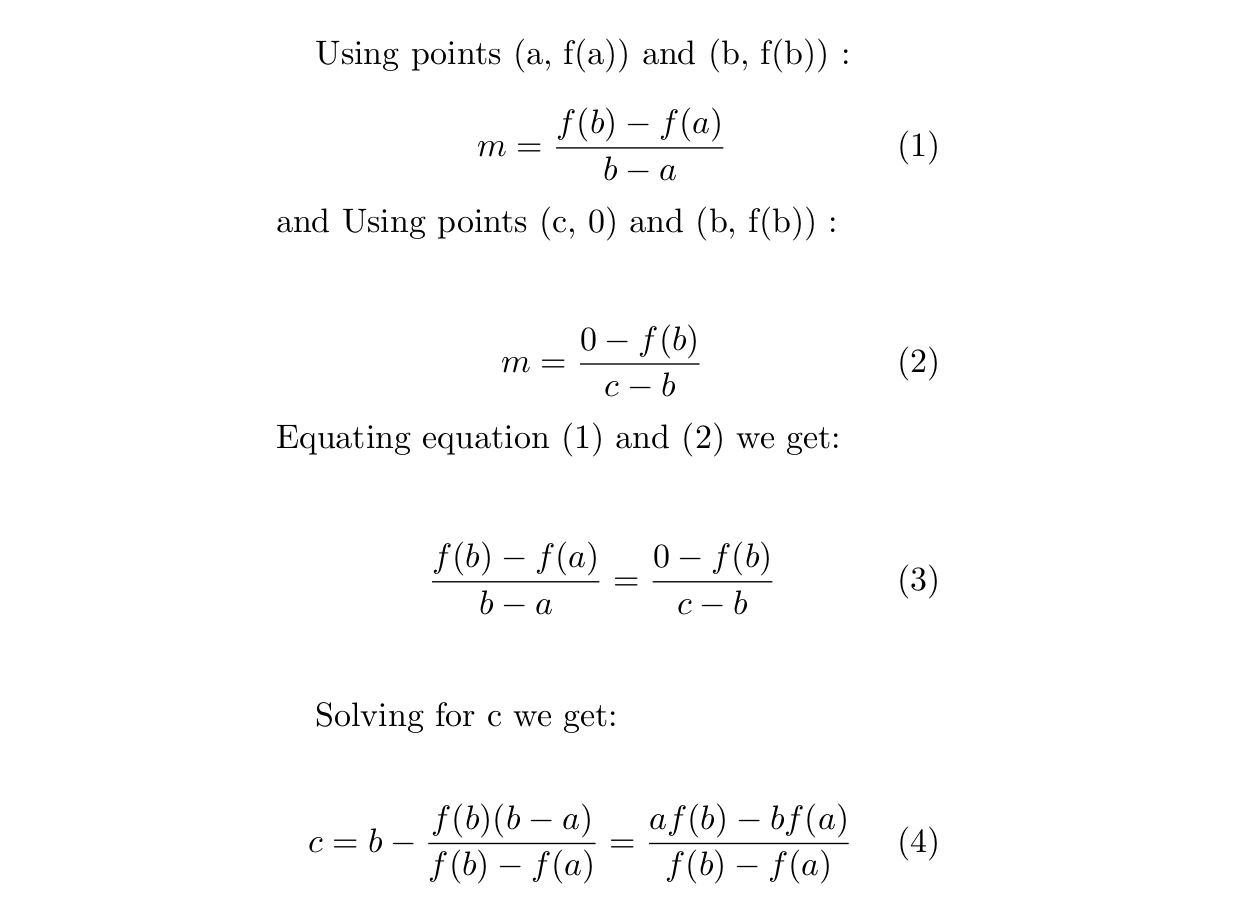 The three possibilities are the same as before in the bisection method:

For a given function f(x),the Regula Falsi Method algorithm works as follows:

Now let's work with an example:

Now, the information required to perform the Regula Falsi Method is as follow: 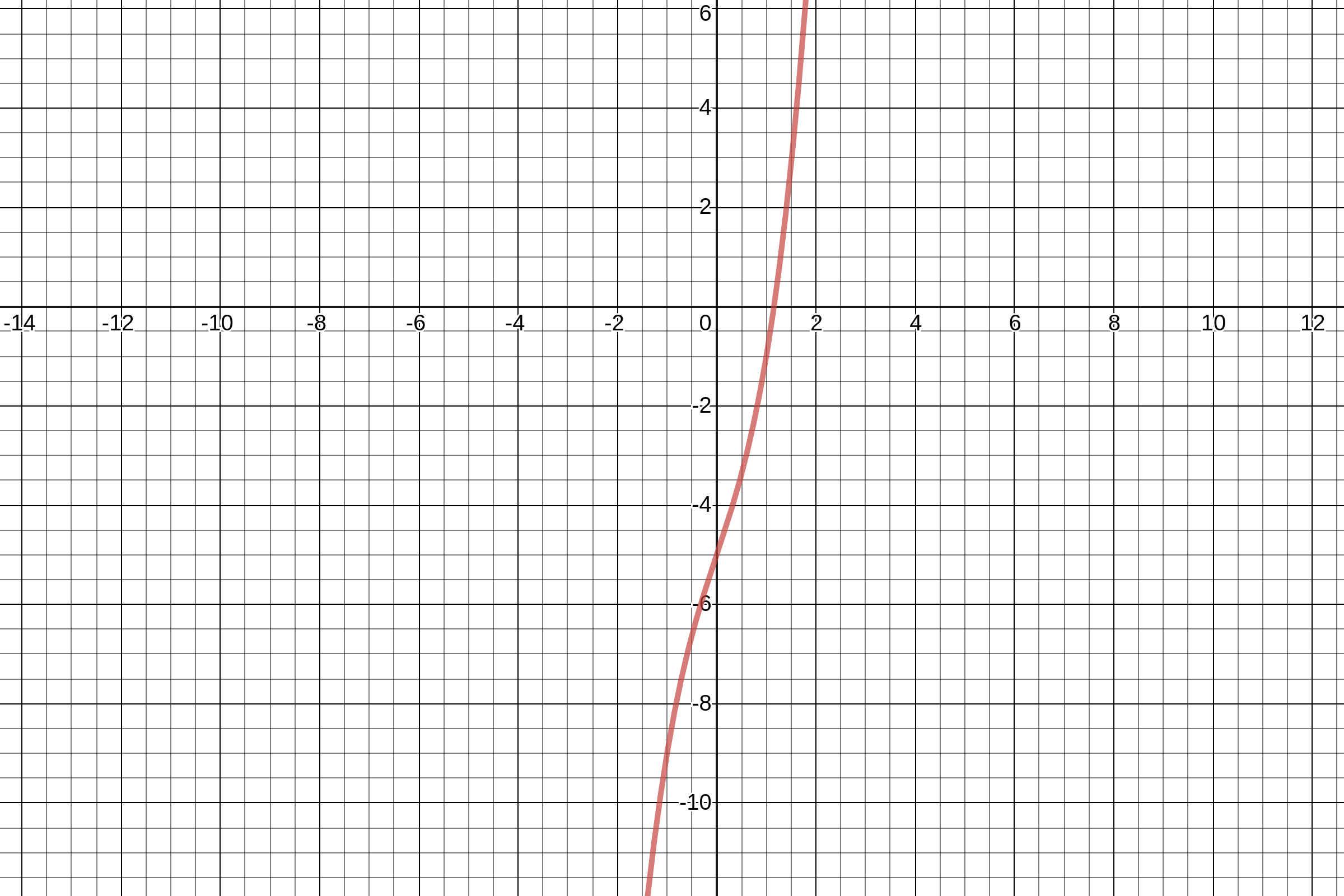 As you can see, it converges to a solution which depends on the tolerance and number of iteration the algorithm performs. 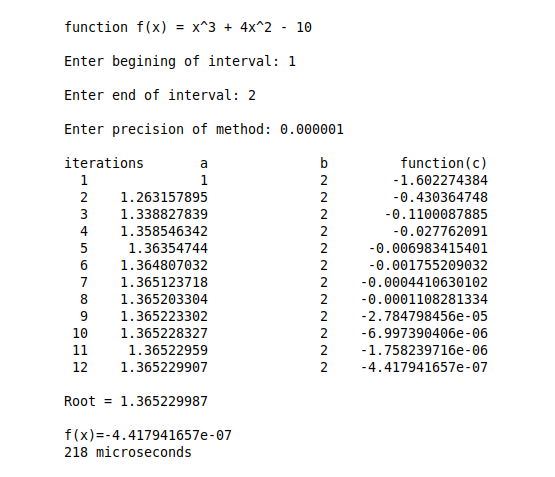 If you have seen the post on Bisection Method you would find this example used in the sample problem part. There the bisection method algorithm required 23 iterations to reach the terminating condition. Here we see that in only 12 iterations we reach the terminating condition and get the root approximation. So in this situation Regula Falsi method conveges faster than Bisection method.

While Regula Falsi Method like Bisection Method is always convergent, meaning that it is always leading towards a definite limit and relatively simple to understand but there are also some drawbacks when this algorithm is used. As both regula falsi and bisection method are similar there are some common limitaions both the algorithms have.

Newton's Method, also known as Newton-Raphson method, named after Isaac Newton and Joseph Raphson, is a popular iterative method to find a good approximation for the root of a real-valued function f(x) = 0.

In this article, we will learn to use Intel SDE using a basic C++ code and capture the generated instructions using MIX tool which is an in-built tool in Intel SDE.