In this article, we have explored the ResNeXt model architecture which has been developed by Facebook. We have provided a Python implementation of ResNeXt along with applications of the model.

Image classification refers to the process of categorizing images into classes that are most relevant to the image provided.In order to obtain a better prediction of Image classes it was thought that , deepening of layers might result in accuracy increase , but it was observed that the error rate kept on increasing . To solve this problem the ResNet was introduced but it also had some limitations with regards to lowering the error rate, henceforth ResNeXt was introduced.

ResNext is a simple network for image classification, it uses the same block of layers multiple times that contains a set of transformation functions that helps in classifying the image. As the ResNeXt is made up of same repeated blocks , the architecture is homogenous and the hyperparameters are reduced.

The ResNeXt architecture is very similar to that of the ResNet , the only difference is the presence of another dimension called the Cardinality dimension.

As you can see in the figure above , the architecture to the left is of the ResNet and to the right is of the ResNeXt , both the networks use the split-transform-merge strategy. This strategy first splits the input by using the 1X1 convolutional layer into lower dimensions , then transforms it by using the 3x3 or the 5x5 special filter and finally merges it by using the summation operation. The transformations that are being collected come from the same topology , hence making the transformations easy to use without the need of specialized designs.The main objective of the ResNeXt is to handle large inputs and improve the accuracy of the network without the need for building deeper layers but instead increasing the cardinality and hence keeping the complexity relatively simpler.

The most simple neurons in neural networks work in the way given in the figure above. The inputs [x1,x2,x3....xD] are provided which are further transformed by using the weights [w1,w2,w3....xD] and finally are aggregated using the summation function.

This same concept will be used by the ResNeXt , but instead of the input being concatenated by the weights , the network will be using a more generic function.

The Ti(x) is the generic function we were talking about and the C is the Cardinality of the network, and finally x represents the input.

Relation between cardinality and width: 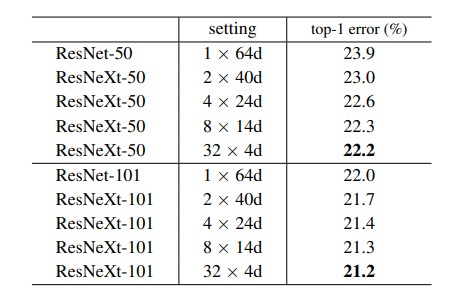 In the above figure it is noticeable that , the Increase of layers in ResNeXt decreases the error rate by a small amount and is even more significant when the Cardinality is increased.

As for the implementation the code is openly available in the github repository, accessible with the link given : facebookresearch/ResNeXt

This is the basic code of implementing the ResNeXt 50 in pytorch and using the torchvision as the tool to access data.

The convolutional layer 3,4 and 5 provide as the downsamplers done with striding of 2 . The initial parameters are set as weight decay bein nearly 0.0001 ,momentum as 0.9 and the learning rate is 0.1.

The model arguments are as follows: 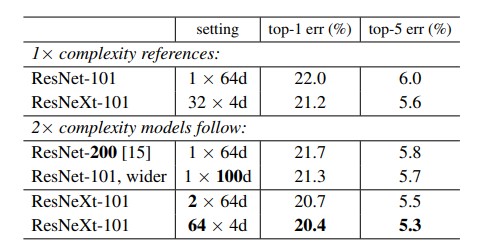 The above table shows that the cardinality plays a very major role in increasing the accuracy and hence satisfies the objective of the paper to establish cardinality as an accuracy increaser. More importantly the cardinality dimension eliminates the higher and profound use of depth , which infact increases the error rate.

With this article at OpenGenus, you must have the complete idea of ResNeXt model architecture.

In this article, we have explored how Tableau can be used for data visualization by using it on Population dataset.

In this article, we have explored algorithm to find the Number of Substrings in a String of 0's and 1's that have 'K' number of 1's.