In this article, we have discussed GitLab's Production Architecture to understand how a large company like GitLab which supports millions of developers handle and scale their infrastructure.

The Production Architecture will be similar for GitHub. 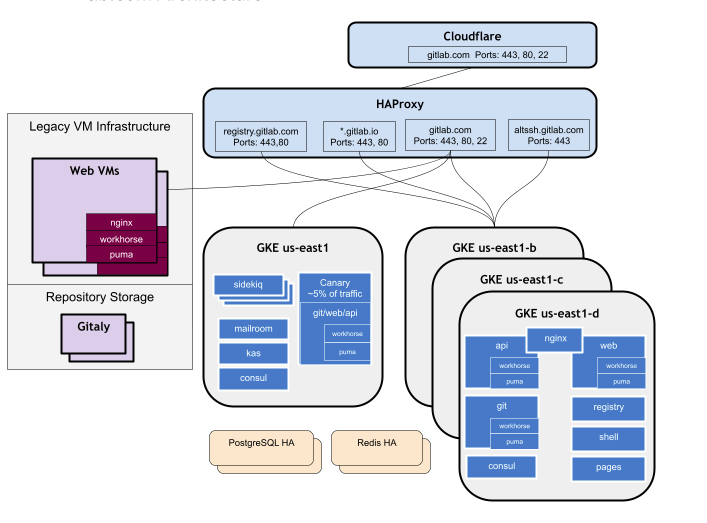 These issues led the gilab team to migrate to kubernetes.

Advantages of using Kubernetes by GitLab

Currently all new services of Gitlab are deployed and managed by kubernetes.

How does Kubernetes work

Kubernetes is a container orchestration platform.It is a open source project which provides a lot of flexibilty in managing and scaling containerized applications in clusters.

As containers became more popular there was requirement for a framework or technology which would ease the process of managing these containers and kubernetes fit that requirement. It was introduced by google to adderess this specific problem.

To work with kubernetes a cluster of nodes is required under which our applications are deployed either manually or through pipelines.

Kubernetes runs in a cluster and this cluster is formed using a group of instances. Some of these instances are assigned the role of master node which governs over the other nodes and ensures that they are properly running. The contain the most important parts of kubernetes.

These are nodes which hold the containerised applications. They frequently communicate with the master nodes receiving instructions , providing them with their demands etc. If a worker node goes down a new worker node is setup to replace it.

These are the most atomic units of kubernetes in which our applications run. They can be defined in a yaml file and deployed in a cluster.

Deployments provide updates to pods . Generally we define deployments which in turn is responsible for managing the pods. Using deployments we can scale up or scale down pods , perform rolling updates , delete them etc.

Services allow us to expose the applications running in the pods.

Namespaces can be considered similar to different virtual environments to seperate the applications running in the cluster.

Kubernetes provides an easy way to deploy applications , perform updates , scaling of applications and rolling them back when needed.

There are two environments within the organisation staging and production. Gitlab makes use of four kubernetes clusters for production and similarly configured clusters for staging. The clusters belong to the three GCP availability zones and one in regional zone.

The reason for having multiple zones is because

Cloudflare is used to receive all inbound web,git ,http and ssh requests utilising HaProxy as an origin. Haproxy routes the requests between the new clusters and traditional VMs. 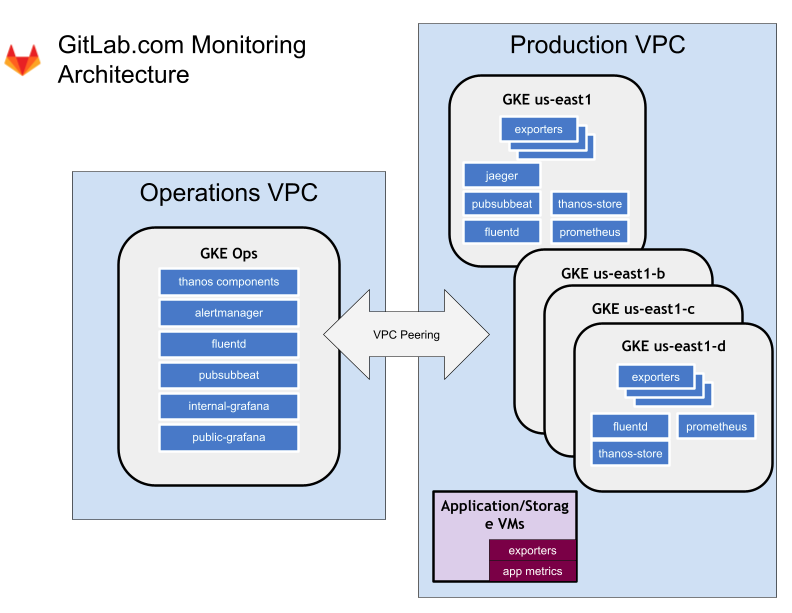 Gitlab also uses Prometheus , every cluster has prometheus deployed in the monitoring namespace.

For logging fluentd is used which forwards all logs to elasticsearch index. The namespace used for this is logging.

Gitlab uses helm charts to perform upgrades in the cluster. Changes are made to the charts yaml configuration files and once the changes are approved the pipeline that applies the required changes run first on the staging environment to ensure it is appropriate.

Upadates to the application are applied in both cluster and VMs to ensure that the same version is present in both cases. A CI pipeline deploys the updates to virtual machines which also triggers a pipeline for the kubernetes cluster which updates the image in the cluster. All this occurs in the staging environment in the first. 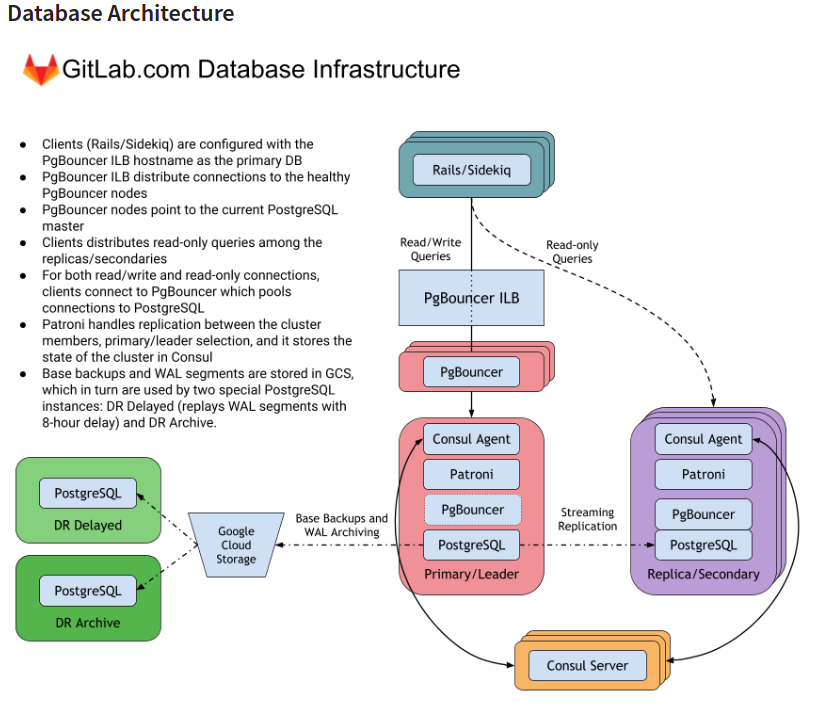 The various components of the database architecture and the usecases are explained below. GitLab mainly uses postgresql to store the data.

For databases Gitlab uses postgresql , for read and write operations the clients connnects to PgBouncer which pools and forwards the requests to postgresql.

Patroni handles replication of data between the cluster members and stores the state of the cluster in consul.

Consul is a Hashicorp based tool used for discovering and configuring different services the infrastructure. Consul can be used to maintain the services present in the distributed systems.

Special PostGresQl instances are used in google cloud storage to store base backups and WAL segments.

The clusters have ingress configured within them which routes external traffic to required services within the cluster. The monitoring service is within this network in which InfluxDB and Prometheus data is allowed to flow to populate the metrics systems.

The DNS system used by gitlab is CloudFlare and route53. Required ACLs and rules are setup to ensure only those required have authorization to access the parts of the network.

With this article at OpenGenus, you must have a good idea of how large applications like GitLab scales itself.

We have explored in great detail some of the different factorization algorithms for Integers such as Trial Division, Pollard's rho algorithm, Dixon's algorithm and Quadratic Sieve.

We explored how overloaded networks are handled using techniques such as applying back pressure and exponential back-off. Let us first begin with the reasons for overload and congestion, after which we will learn how to mitigate it.