In this article, we have developed Snake Game in Python Programming Language and developed the GUI for it as well. You shall follow this guide and develop your own version. This will be a strong addition to SDE Portfolio.

What we shall build

In this game, there is a continously moving snake, the snake is directed (using arrow keys) by the player in attempt to eat a fruit spawned somewhere on the screen. The motive of the player should be to score as highly as possible without meeting any of the following conditions:

With every fruit eaten by the snake, the player is awarded 10 game points.

This article presumes knowledge of python OOP and pygame. The good news is, the pygame documentation is well organised, easy to follow and understand and besides that, only a couple of pygame modules have been used in the game.

The source code for the game can be found at this github repository. I recommend going through the source code yourself before continuing. And if you find everything comprehensible, you dont have to read past this point.

I will pat myself on the back and congratulate myself upon writing code that a human can understand 😄. 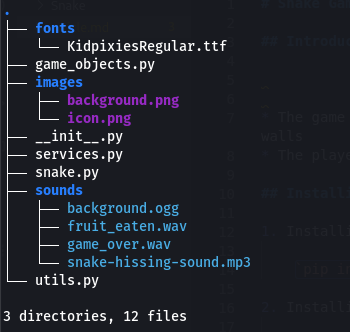 The uitilities file only has a single class (Position) that will be used to represent positions.

The snake is represented by small square blocks of a given size(still a rectangle with equal sides) and initially, the snake is just three blocks long.

The first block is the head and the rest of the blocks shall be considered as tail blocks.The head's position is always reflective of the current position of the snake.

The position and size attributes are private because the position will only be manipulated by the move() method and the size attribute is not subject to change once the snake object has been instantiated or created.

How the snake moves

This implies, in each frame, a block with an outdated position is removed and a block with the current position is added to the front. As frames are drawn, a simulation of motion is created.

When does the snake feed on itself

The condition to which the snake is said to have eaten itself is when the head(the first block) gets into contact with any of the other blocks. In other words the head's position is equal to any of the tail blocks' positions.

How the snake grows

The snake growth mechanism is not different from the moving mechanism except that, the last block of the snake body is not removed since we are interested in the increase in length.

The fruit is represented by a square block of predefined size.

This class has all its properties marked as private for the same simple reason: Once the fruit is created or instantiated, the properties are not subject to change during game play. Rather new ones can be created with the desired properties.

The move method repositions (in place) the fruit using the move_ip() method of the pygame.Rect class

NOTE: I have not used the move() method of the fruit class in game play, since I have followed the approach of spawning new fruits at the desired position rather than modifying their positions.

The services file exists to isolate certain prevalent functions such as drawing text on the screen. It is simply a wrapper of the few prevalent features desirable in the snake game that you would rather not repeat yourself incase that particular feature is needed.

I am afraid to say, there is already a better place that explains what is going on in this file, please go ahead and read the pygame documentation. Dont shy away

There is just one subtle thing to note about the GameSoundService, two channels have been used to play game sound, simply because certain sounds are desired to be played simultaneously. Forexample, as the background music is playing, you might want to play the fruit_eaten.wav sound without stopping playback of the background music.

This is the file that glues all the rest together.

The Game class has a few attributes worthy taking note of.

snake_direction: The default direction is "R". This attribute is in place to prevent reverse movements of the snake.

window_top_margin: Marks the start of the screen height available during game play since some space at the top of the window is reserved for drawing the player's score.

frame_rate: Determines how fast frames are drawn to the screen. You can get the right value for this by trial and error.

This method starts the game. It draws the start and exit button on the game window. When the player clicks the start button, control is delegated to the start() method.

The startup() method is the core of the Game class. Before the game loop, screen is cleard to have a blank window, fruit and snake are drawn onto the screen.

With in the game loop, we listen to the quit and arrow events. From the arrow events, we deduce the displacement of the snake(How many units should the snake move in the x and y from the current position).

Regarding the movement of the snake, direction of the snake is important, imagine the player pressing the up arrow key when the snake is currently moving downwards, the snake reverses i.e moves upwards. This isn't allowed. As a workaround, the snake_direction attribute keeps track of the snake's current direction, so as not to permit movments in the reverse direction.

If game over conditons aren't met yet and the snake's position is equal to that of the fruit(fruit eaten), player is awarded 10 points, snake grows, fruit eaten sound is played and another fruit is spawned in a random position on the screen. If the snake hasn't eaten the fruit, the fruit is redrawn at the same position.

When the game ends(Game over conditions met), game over screen is drawn, which simply listens for quit and space bar key event. In response to pressing the space bar key, the game is restarted and the whole process starts again.

I am a newbie in game development and not to mention, this has been my first time to use the pygame package. However, the pygame documentation is one of the most comprehensible documentation I have ever read. With the pygame alienness out of my way, I was closest to successfully completing the game.

For the first I had no choice but to figure it out on my own, and the solution to the second is what led me there. I just had to start thinking in terms of frames to get everything right.

I hope, I have not created another fuddle of code.

In this article, we will work on the C++ project of Typing Speed. We will learn about implementation of the complete program in C++ which will check our typing speed.

In this article, we will look at how to compute the index using pointers returned by STL functions. It will be explained in such a way that even a 4th grader would get it.