In this article, we are going to have a look at the A * Search Algorithm , its properties, some of its advantages and disadvantages as well as real life applications.

Let u get started with A * Search Algorithm.

What is A * Search Algorithm?

A * algorithm has 3 paramters: 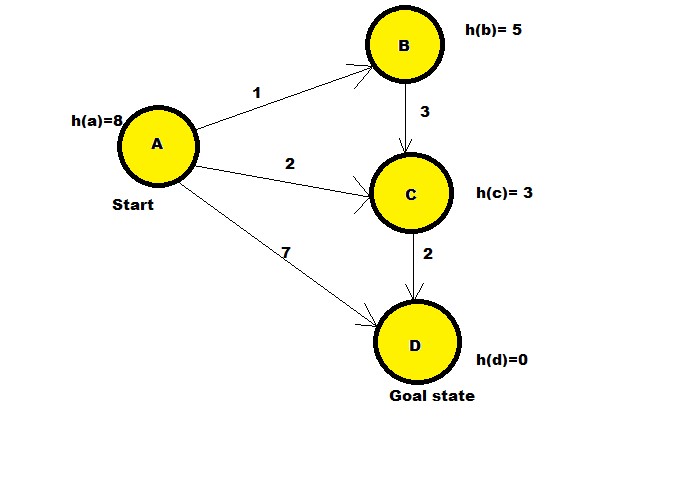 • Admissible:If a solution exists for the given problem, the first solution found by A* is an optimal solution.
• Complete: A* is also complete algorithm , meaning if a solution exists, the answer is bound to be found in a finite amount of time.
• Optimal: A* is optimally efficient for a given heuristic-of the
optimal search algorithm that expand search paths from the
root node, it can be shown that no other optimal algorithm will
expand fewer nodes and find a solution.

Advantages and Disadvantages of A * Search

Applications of A * Search

FAQ's:
What is the use of heurstic values?
-->In simple words heuristic value defines the estimated cost to travel to the goal , but in the meantime avoids backward propagation of the path.

What does the A* indicate?
-->The * in A* represents optimality of the first solution found,hence, A * search algorithm searches for the shortest path to traverse between the initial state and the final state.

What if two paths are having the same costs ?
--> In this case , the algorithm parallely runs both the paths to better reach the goal.This often happens in this algorithm , Since our example was quite simple this scenario didn't occur.

What happens if there is no solution?
--> The algorithm evaluates all the adjacent nodes and then comes to the conclusion of existence of the solution.

With this article at OpenGenus, you must have the complete idea of A * Search algorithm.

One of the greatest tools a programmer can have under their belt is the ability to write tests to ensure the code they are producing functions well. Rust of course has a way of writing tests, and this allows a test driven development cycle.