Exceptions are runtime anomalies/ errors or unusual conditions that a program may encounter during its execution. It is important to handle these situations to ensure that the program does not show undefined behaviour during runtime like terminating execution in between.

C++ provides several ways to handle exceptions. We can do so by handling exceptions using custom code which will use the following keywords:

In addition to that, C++ provides custom exceptions (predefined) which we can use and it has std::cerr which is a stream for error outputs.

The keyword try is used to preface the code you want to test i.e all the code to be tested for exceptions is put inside the try block

An exception is thrown by using the throw keyword from inside the try block.

A throw expression triggers that an exception condition (error) has occurred in a try block. You can use an object of any type as the operand of a throw expression i.e exception can be of any object type or variable. Typically, this object is used to communicate information about the error.

So you threw an exception now what, you want it to be handled right ??
That's where catch comes to play. A catch is just a code block similar to try 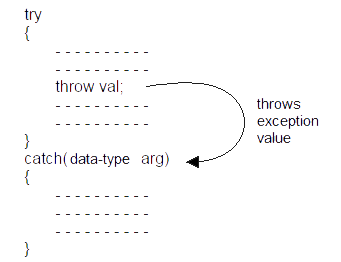 If the type of object thrown by the try block matches the any obj type in any catch statement than that catch block is executed.
For handling exceptions of any type other than thrown by you

Ellipses (...) is used in the catch block arguments.

Note that once a exception is thrown it is matched with the catch blocks one by one if a match is found than that block is executed else it continues on checking for a match.

If no catch block matches, the last catch(...) block is executed.

Below is a simple implementation of the things we learned so far.
The program does division of two numbers and if the Denominator is 0 it throws an exception.

The above program prints

We can define our own exceptions in C++ by inheriting from the class Exception and overriding its what() function.

Here is a sample code

The above program would print

what() is a predefined function in the <exception> header which just returns an explanatory string regarding the exception.

Just like we use std::cout to write data to standard output stream and std::cin for input .

std::cerr is used to write data to standard error stream.

The 'c' in the name refers to "character";
cerr means "character error (stream)"

Viewport is the area of a web page which is visible to the user. It is not fixed in size, and varies with the size of the screen of different devices.

With Standard template library available in C++, many functions are easier to implement. One of them present is sort function as well which we are going to discuss.