Word Embeddings correlates the likeness of the meaning of words with their relative similarity and represent them numerically as a vector.

In this article, we are going to see What is Word Embeddings? And why we need it? First of all, come to our second question's answer: We need it because

In simplified terms, Word Embedding is the representation of the word in numeric format, usually in the shape of a vector of dimension d. And there may be various numerical representations for the same word.

In formal terms, Word Embedding is a procedure that treats words as vectors whose relative likenesses associate with semantic closeness. Earlier, Natural language processing (NLP)systems generally encode words as strings, which are subjective and give no valuable data to the system concerning the connections that may exist between various words. But now this problem is solved by applying the word embedding technique to gain insight into words.

To have a clear view take an example, let’s take the words India, Delhi, America, and Washington. We can use basic arithmetical operations to discover semantic similarities. Estimating likeness between vectors is computable using measures, such as cosine similarity. So when we subtract the vector of the word Delhi from the vector of the word India, then its cosine distance would be close to the distance between the word Washington minus the word America. 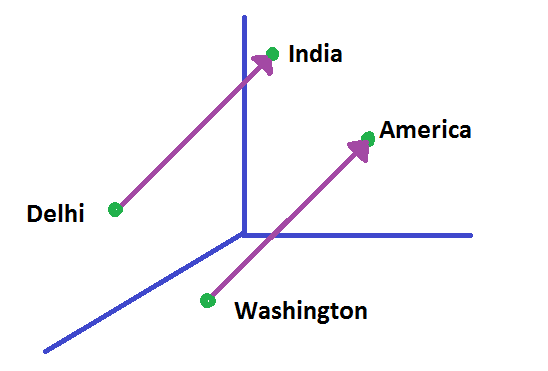 Word embeddings Methods can be divided into two main categories:

The GloVe model is one of the unsupervised learning algorithm log-bilinear model for learning word embedding or obtaining numerical(vector) representation of words, developed by Stanford. The core insight of the GloVe Model is the simple observation that the likelihood of word-word co-occurrence ratios has the capacity to represent some type of significance. GloVe works by using the global matrix factorization.

May be sometimes a question struck in your mind that Why for all Unsupervised Methods we use word occurrences statistics in a corpus as a primary source for learning word representations? Lets take a simple example to get the clear view that what's going on exactly:

The word2vec is the most popular and efficient predictive model for learning word embeddings representations from the corpus, created by Mikolov et al. in 2013. It comes in two flavors, the Continuous Bag-of-Words model(CBOW) and the Skip-Gram model. At a much lower computational cost, the Word2Vec model showed a huge improvement in efficiency and accuracy. Algorithmically, the CBOW and the Skip-Gram model are similar but there is a difference in these models, the Skip-Gram model by taking the target words predicts the source context words. While the Continuous Bag-of-Words model does opposite, by taking the source context words it predicts the target words. Here target words are the center words while the contexts are surrounding words. For Example in the sentence "Today's Weather is too hot". In this, we take [Weather] as a target word and [Today's, is, too, hot] as the context words. For having a clear view you can see the below example: 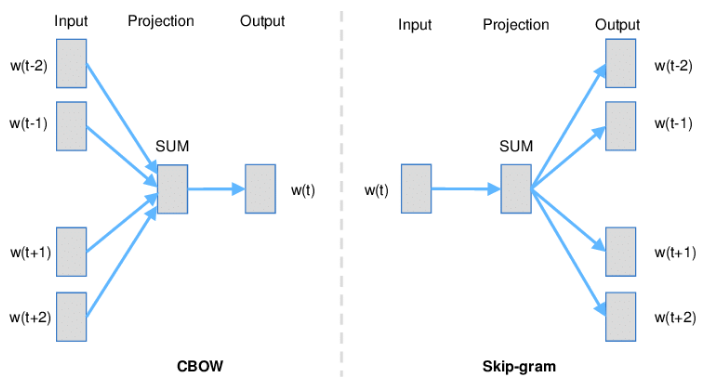 Here we implement the word2vec algorithm on “Game of Thrones” data. And for this we use the gensim module that implements the word2vec family of algorithms directly without any complexity:

It gives the result:

To get the top ten similar words to "king" in Game of thrones Corpus Word embedding space: 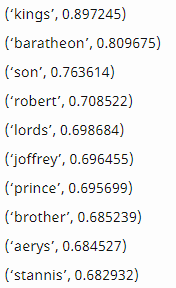 To get the top ten similar words to "queen" in Game of thrones Corpus Word embedding space: 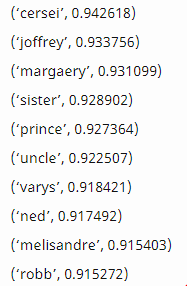 You must already have come across some examples of why word embeddings are used. Some interesting, and more specific examples are:

A technique for reducing the dimensionality of machine learning datasets is the Feature Selector. The selection process of the Feature Selector is based on a logically accurate measurement that determines the importance of each feature present in the data.