Hashed Array Tree is an improvement over Dynamic Arrays where there can be a large amount of unused allocated memory at a time. This can be visualized as a 2 dimensional array and has been developed by Robert Sedgewick, Erik Demaine and others.

Naive variable length arrays and why they don't work out?

Arrays are the most widely used and a convenient data structure for a great many applications. They provide constant access time to their elements and are the structure of choice for many practical algorithms. 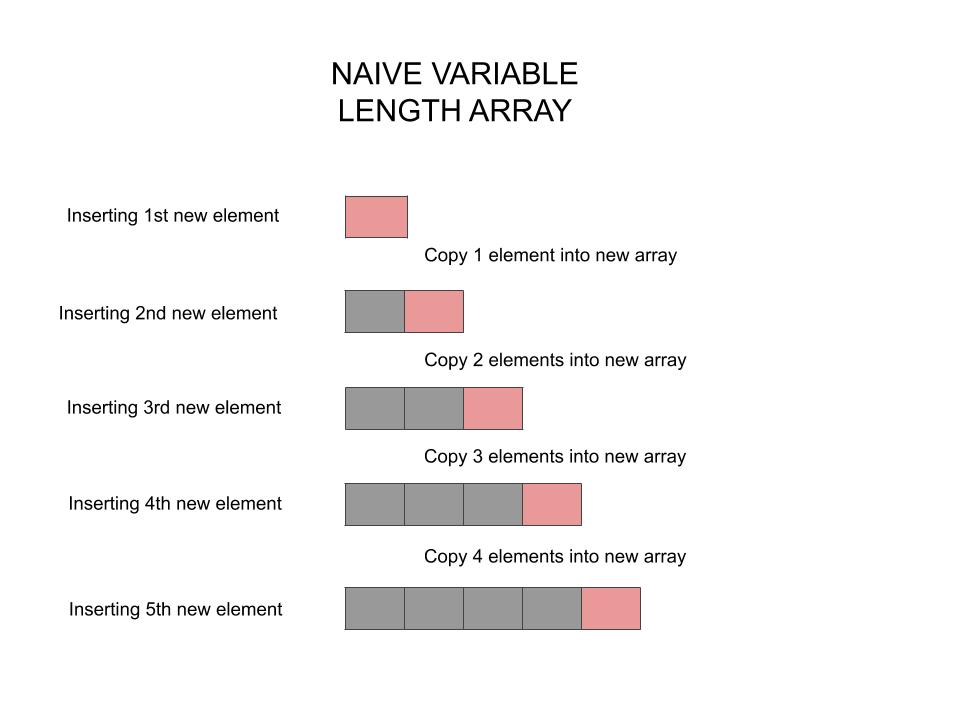 On doing this, we take up a lot many copying operations than is actually required.
As we can see in the above diagram, each new append will cost us $N$ copy operations of the $N$ elements to a new contiguous memory location (a new array) and $1$ insert operation of the new element.

Which turns out to be $\mathcal{O}(n^2)$ algorithmically; and that just for appending a new element to an array! We can sort the array faster than that!

What are dynamic arrays and how they work?

Dynamic Arrays work differently. When appending, it first checks whether the array is filled or not. If not, the new element is appended and that's all. Whereas if it is filled, it goes through the resizing procedure, where it copies all current elements to a new block of contiguous memory.

The difference from the naive approach is that the new contiguous block of memory does not include space for just one new element. In this approach the size of the newly allocated block of memory is increased to twice than that of the old one. 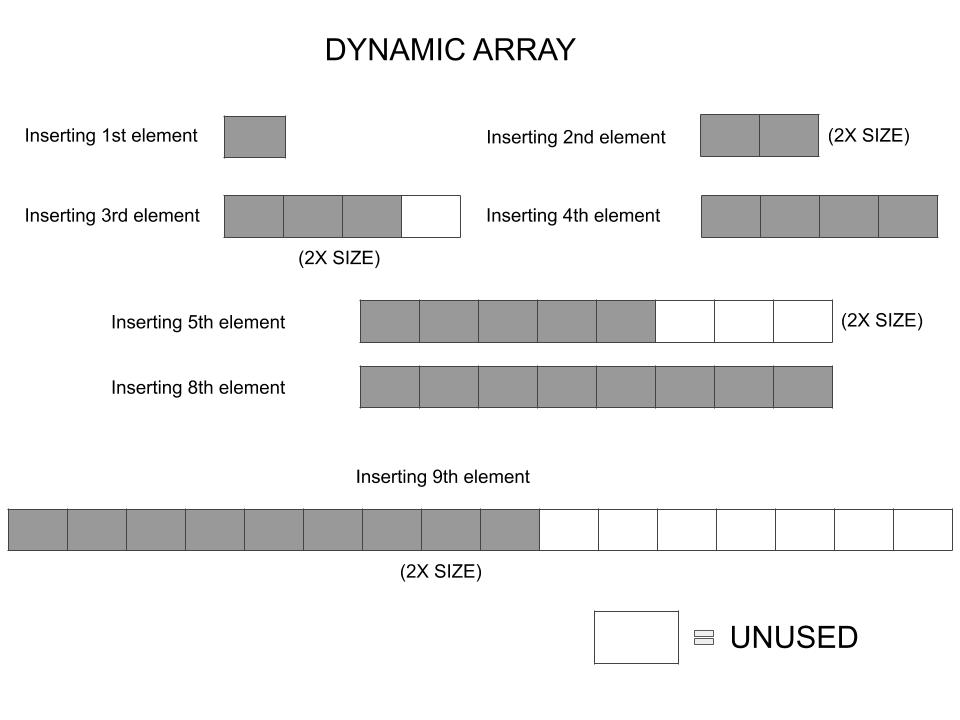 With this, there are lesser number of copy operations and not each append would need resizing all over again, as in the naive approach. We can see here that appending 9 elements to a dynamic array takes up only 15 (1+2+4+8) copying operations over only 4 resize cycles. We can go on and add 16 elements without any further resizing.

A quick calculation can tell us that since we need 15 copy operations to append 15 elements, we have managed to find a way to append new elements to a variable length array with a $\mathcal{O}(n)$ complexity, which is lots better than the naive approach. Also note, the number of assignments for the new elements do not increase.

Further, amortized analysis of the runtime for the insertion of an element at the end of such a structure would prove to be $\mathcal{O}(1)$.

So it's an improvement right? Not necessarily. It remains perfectly balanced, as all things should be. We'll talk about the tradeoff happening in this approach in the next section.

What we notice in the diagram is a lot of unused cells. And this increases as the array size grows larger. 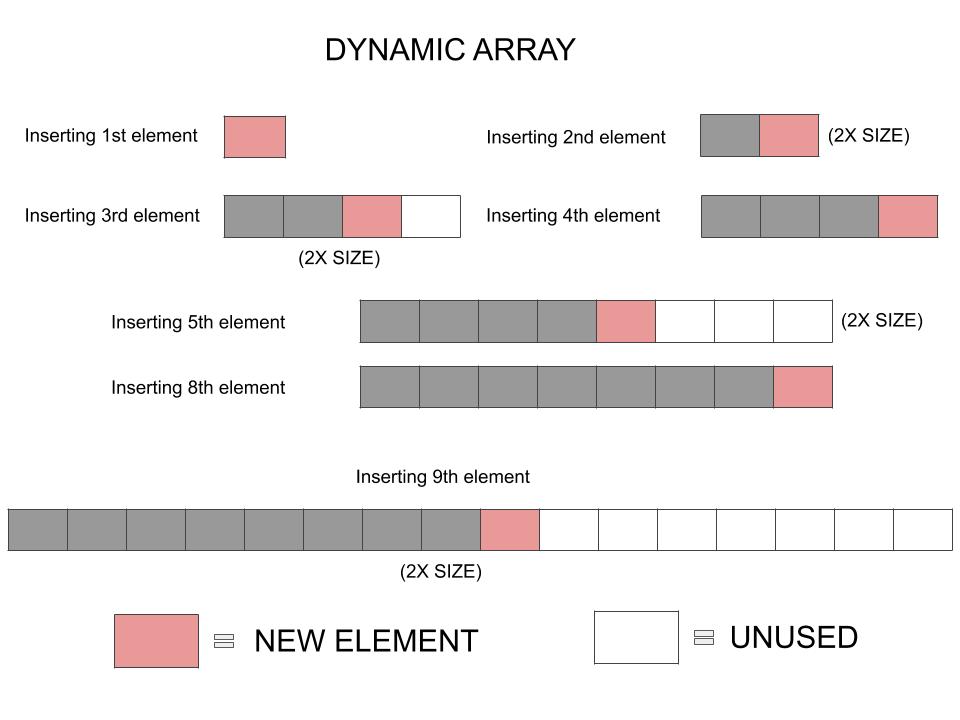 This is where the Space-Time tradeoff happens. To make appending the new element more efficient we have sacrificed on the efficient utilization of space.

Consider a worst case situation where after inserting the 9th element, we do not ever need to insert any elements. That would leave 7 array cells empty. They cannot be utilized by any other part of the program as they are already a part of the array. This is nothing but wastage.

In the worst case, we see a space wastage of nearly $\frac{N}{2}$ blocks, where $N$ is the total space already allocated to the array. Which is written as an average of $\mathcal{O}(n)$ space wastage.

Idea of a new data structure

During the copy operation of arrays we've studied uptil here, BOTH the existing array and the new array must be present in memory at the same time, for elements to be copied from one to another whilst resizing.

But say we have a new data structure which somehow can improve on efficiency - in time and space. Let's see how! 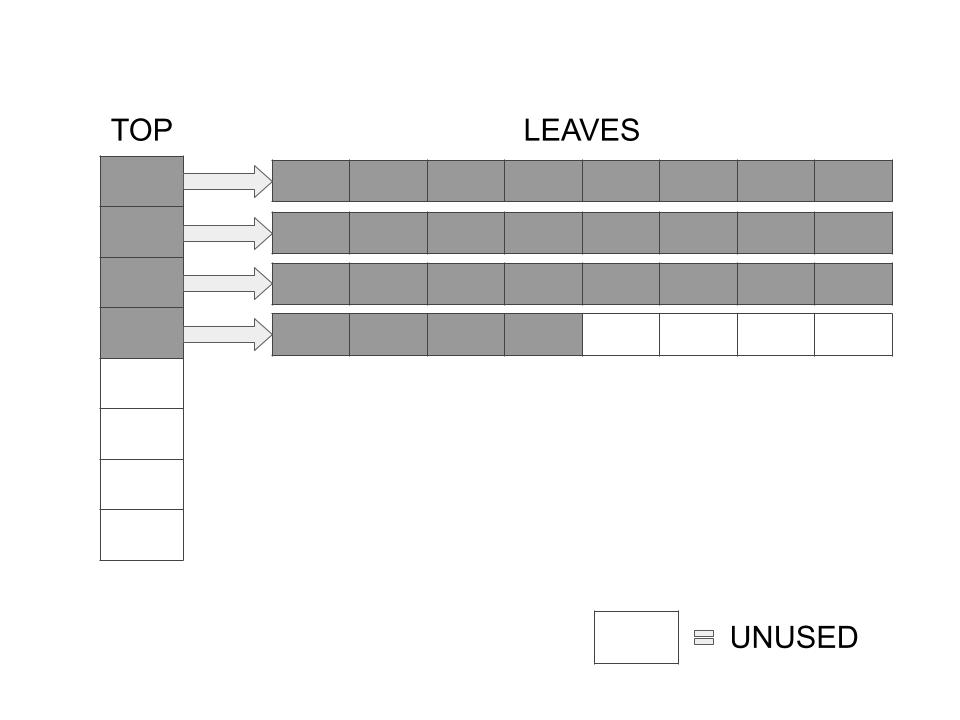 This is what it looks like diagrammatically. This one is a partially filled 8-HAT.

We store the one dimensional array into a structure that can be visualized in two dimensions. But doing so, we improve the problems we faced earlier with the naive variable length and the dynamic arrays. This new idea has been called Hashed Array Trees (or HATs).

Because the Top and Leaf arrays are powers of 2, you can efficiently find an element in a HAT using bit operations.

Say for the 8-HAT example above, if we wanted to access value of array at index 26, without knowing how the implementation is done, we can access it via HAT_array[26] as normal. ALTHOUGH, there'll be functions in the background that process the actual result from the 2D structure.

The function would work as follows:

Note: The same result can be easily achievable by performing division and modulo operation to calculate quotient and remainders, but bit operations are much faster, and that's the reason we have Top and Leaf always as powers of 2.

Usually, appending elements is very fast since the last leaf generally may have empty space; like we see in the example above. Less frequently, we'll need to add a new leaf, which is also very fast and requires no copying. We can add a leaf by creating a new empty array of the required size and have the next element from the Top array pointing to it.

When a HAT is full, copying and resizing cannot be avoided anymore. Here's an example of a completely filled 8-HAT: 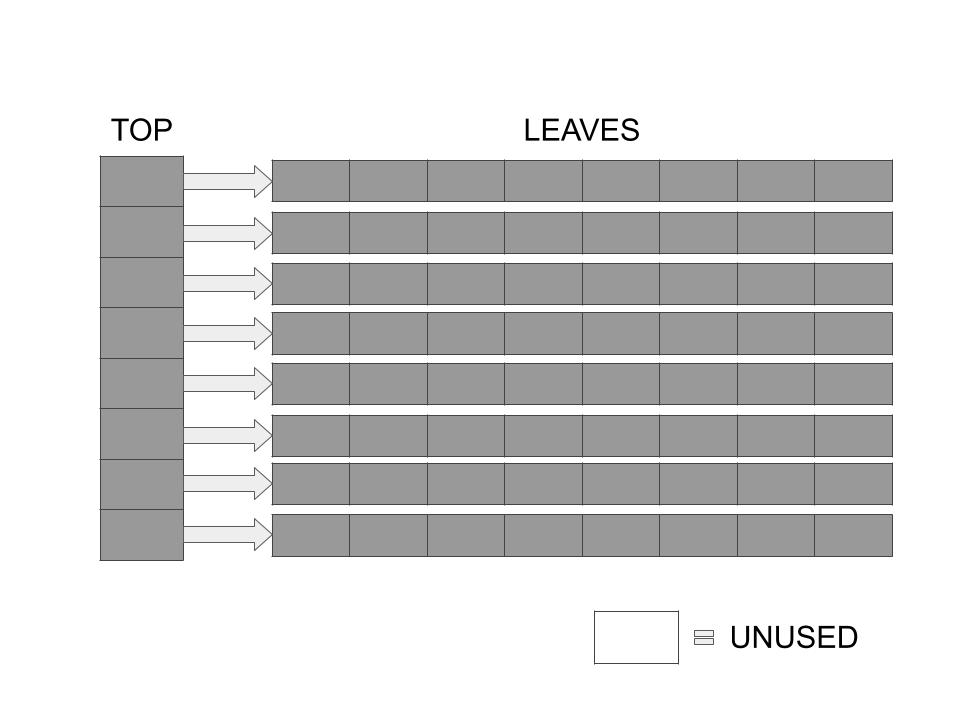 The above structure has 64 elements in it, and is now ready to be resized before appending anything else in it.

This is when things get interesting. Sitarski's implementation first computes the correct size for the new HAT keeping in mind that the new Top and Leaf arrays are the same size, both a power of 2, then copies the elements into the new HAT structure, freeing the old leaves and allocating new leaves in an as needed basis.

For this particular example, the next power of 2 after 8 is 16. We'll have a new HAT which has a Top array of 16 elements and each of it's leaves will have 16 elements too. Only then, can we insert the 65th element to the HAT. 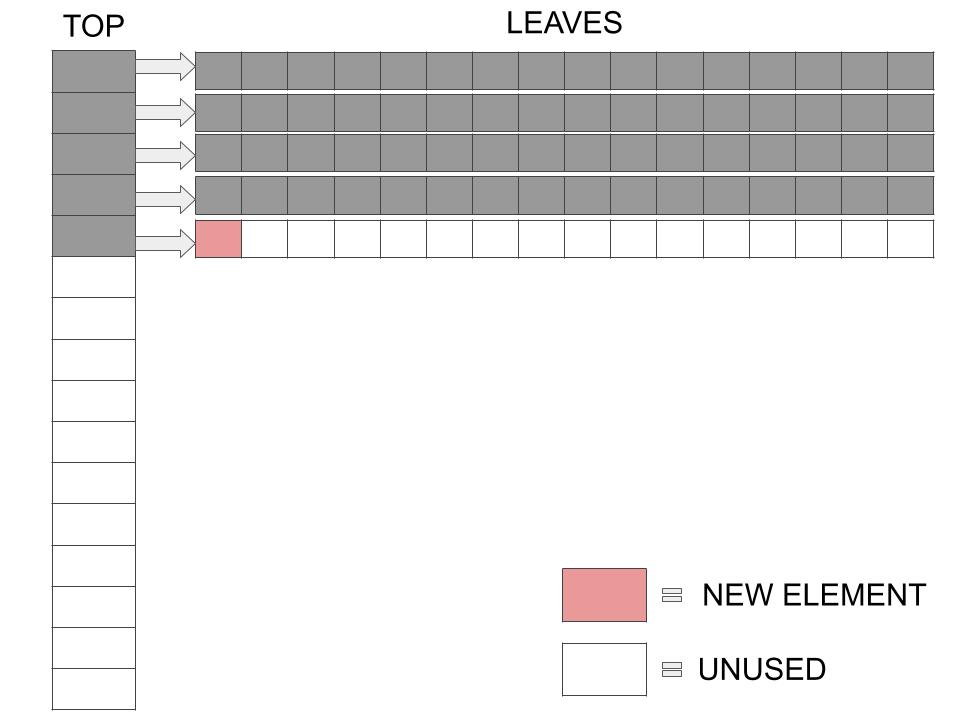 Inserting the 65th element above; which can be accessed at top[4][0], with zero-based indexing.

Time and Space Improvements with HATs

This is a step by step guide to build a static site using Gatsby. Gatsby is React based, GraphQL powered static website generator. It combines best of React, GraphQL, and Webpack.